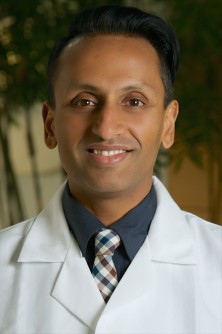 ANN ARBOR, Michigan — Cancer is often seen as a disease of genetic changes. But one type of childhood brain tumor has stymied efforts to identify a recurring genetic defect.

Now, new research suggests changes at the epigenetic level – specifically alterations in proteins that affect gene expression, rather than genetic mutations – could be driving childhood ependymomas.

“Clearly there’s more to cancer than just genetic mutations. Not every cancer is going to fit that box of having a genetic driver,” says Sriram Venneti, M.D., Ph.D., assistant professor of pathology at the University of Michigan Medical School.

Three separate groups have performed advanced sequencing on ependymomas, a tumor that occurs at the part of the brain called the posterior fossa, which is the back base of the brain including the cerebellum, pons and brainstem. It can develop in both young children and adults but is particularly challenging to treat in children.

When sequencing efforts did not yield any recurring genetic alterations, the University of Michigan-led team looked at epigenetics, in particular, changes in histone and DNA methylation, processes that regulate gene expression. They found about 80 percent of pediatric hindbrain ependymomas had substantially reduced levels of H3K27me3, a critical histone H3 protein modification. These tumor samples consistently tied to worse outcomes in children, suggesting a critical marker for predicting prognosis.

What’s more, the researchers found that simple immunohistochemical staining methods in tumor biopsy samples can show whether the tumor has high or low levels of H3K27me3 that could predict prognosis.

“We could do it very simply, with a very fast and economic process that is easily incorporated in patient care,” Venneti says. The study is published in Science Translational Medicine.

Traditional prognostic markers based on tumor grade have proven unreliable for ependymomas. Understanding a patient’s prognosis can help doctors make treatment recommendations, which can be especially challenging for this disease in children.

In children, ependymomas typically occur under age 5. Surgery is a preferred treatment, but can be difficult in tiny brains where many critical functions are developing. Often, surgeons don’t get the entire tumor out, leading to recurrence. Chemotherapy and radiation can cause devastating side effects to children, and it’s not clear how beneficial the treatments are for this disease.

Researchers are also exploring a potential new therapy that could target H3K27me3 and reverse the lowered levels. This work is still in early phases; more study is needed.

Ependymomas also occur in adults, but in the study, none of the adult tumor samples had reduced H3K27me3.

“Different mechanisms are involved in these two tumors, but they arrive at the same place,” Venneti says. “This suggests low methylation of H3K27me3 is important to tumors in this region of the brain. These tumors arise from similar epigenetic states.”

Most childhood brain tumors develop in the posterior fossa of the brain – very different from where adult brain tumors occur. Venneti suggests that there may be something about the development of that region that makes children susceptible to these cancers. Preliminary research implicates neuronal stem cells. Studies looking at the posterior fossa of the developing human brain showed low H3K27me3. Neuronal stem cells are marked by their ability to differentiate into other types of cells. That process does not appear to happen in these brain tumors.

“We still don’t know the mechanism of how this is happening. Brain tumors are the most common type of solid cancer in children, but they’re still poorly understood,” Venneti says. “We hope that studying the epigenetics will give us more information on how the brain develops. And in turn, understanding how the brain develops could help bring answers to understand these deadly cancers.”