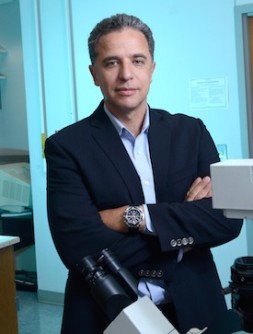 Dr. Hesham Sadek, Associate Professor of Internal Medicine and Associate Director of the Hamon Center for Regenerative Science and Medicine

Dr. Hesham Sadek, Associate Professor of Internal Medicine and Associate Director of the Hamon Center for Regenerative Science and Medicine, will be the American coordinator for researchers in Paris, Madrid, London, Stockholm, and New York. The team is one of five selected this year by the Leducq Foundation of Paris to receive a five-year, $6 million grant as part of its Transatlantic Networks of Excellence Program. The award is designed to bring top researchers from around the globe – but particularly Europe and North America – together to collaborate on research into cardiovascular and neurovascular disease.

“The potential for scientific interaction within this network is particularly exciting. Every single member of the consortium is a major figure in his field,” said Dr. Sadek, who is known for discovering that heart cells in newborn mice regenerate if damaged and subsequent research showing that sharply reducing oxygen in their environment enables such regeneration even in older mice.

Other research by Dr. Sadek has found that human heart failure patients show evidence of regeneration if their damaged heart is rested by placing it on an LVAD machine, a mechanical pump that takes over most of the work.

Almost 6 million Americans suffer from heart failure, a progressive deterioration of heart muscle that leaves the organ unable to pump enough blood to support the body. About half of those with the disease die within five years of diagnosis, according to the Centers for Disease Control and Prevention. A heart transplant is now the only cure.

When heart muscle cells are killed by a heart attack, infection, or long-term cardiovascular disease, a deadly spiral begins.

“The heart muscle, when lost, is not replaced. So the remaining muscle has to pick up the function of the lost muscle, and must work harder, and so muscle cells continue to die,” said Dr. Sadek, who holds the J. Fred Schoellkopf, Jr. Chair in Cardiology.

While some amphibians can replace damaged heart cells, mammals appear to lose the ability shortly after birth.

Dr. Sadek’s international team of scientists will work with both mouse models and failing human hearts donated by transplant patients as they search for ways to either prevent the damage within heart cells that causes them to lose the ability to regenerate, or find ways to fix it, he said.

The group of researchers includes Dr. Jonas Frisén, Professor at the Karolinska Institutet in Stockholm, who came up with a way to carbon date human tissue to determine the age of cells within the body, and European principal investigator Dr. Miguel Torres of the Cardiovascular Development and Repair Department in Madrid.

Others include Dr. Luke Szweda, formerly of the Oklahoma Medical Research Foundation and the University of Oklahoma in Oklahoma City; Dr. Roger Hajjar of the Cardiovascular Research Center at the Icahn School of Medicine at Mount Sinai in New York; Dr. Bertrand Friguet of the Institute of Biology Paris-Seine at the University Pierre and Marie Curie; Dr. Ajay Shah of the Cardiovascular Division at King’s College London; and Magdi Yacoub, FRS (Fellow of the Royal Society), of the National Heart and Lung Institute in London.

The Hamon Center for Regenerative Science and Medicine, directed by Dr. Eric Olson, Chair of Molecular Biology, works to decipher the mechanisms of tissue and organ formation and disease, and develop innovative strategies for tissue repair and regeneration. Dr. Olson holds the Pogue Distinguished Chair in Research on Cardiac Birth Defects, the Robert A. Welch Distinguished Chair in Science, and the Annie and Willie Nelson Professorship in Stem Cell Research.

To automatically receive news releases from UT Southwestern via email,
subscribe at www.utsouthwestern.edu/receivenews.