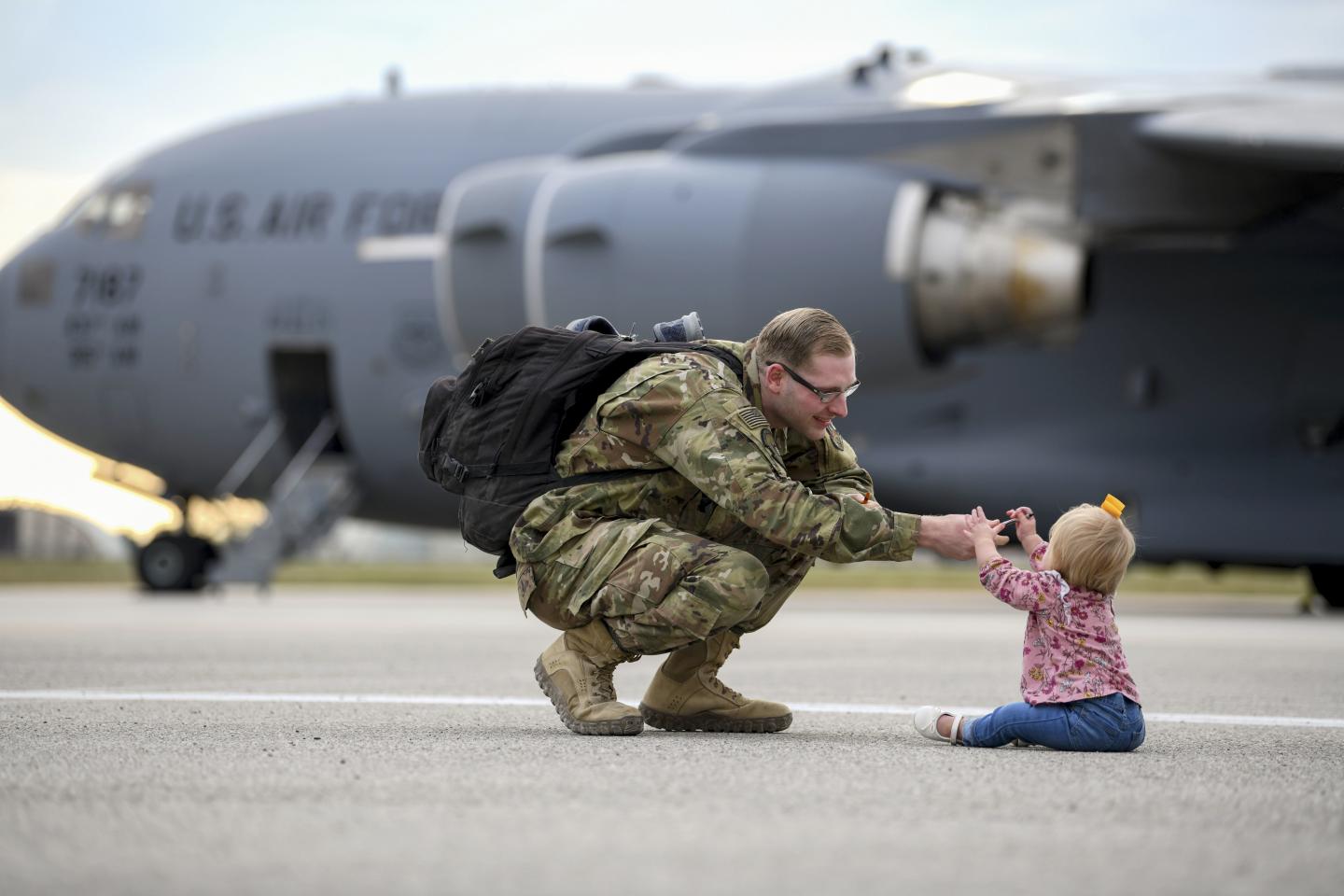 In this US Air Force image, an airman reunites with his daughter following a deployment. A new study by Veterans Affairs researchers and colleagues has found that health ranks as the top concern for veterans newly separated from military service.

According to Dr. Dawne Vogt of the VA Boston Healthcare System and Boston University, lead author on the study, the results highlight the importance of addressing veterans' health concerns early.

"What remains to be seen is whether those veterans with health conditions--which were more commonly experienced by deployed veterans--continue to maintain high levels of well-being in other life domains over time," she says. "Given that it is well-established that health problems can erode functioning in other life domains, it may be that these individuals experience declines in their broader well-being over time."

The results appear Jan. 2, 2019, in the American Journal of Preventive Medicine.

More than 200,000 U.S. service members transition out of military service each year. Researchers have pointed to the early transition period as a critical time to address challenges veterans may face in readjusting to civilian life.

To investigate which of these challenges are most pressing to newly separated veterans, researchers from the VA National Center for PTSD and colleagues surveyed almost 10,000 veterans from a population-based roster of all separating service members.

All participants left the military in the fall of 2016. Veterans were surveyed about three months after their separation, and then six months after that.

The researchers found that the biggest concern was health. At both three and nine months after leaving the military, 53% of participants said they had chronic physical health conditions. About 33% reported chronic mental health conditions at both time points.

The most commonly reported health conditions were chronic pain, sleep problems, anxiety, and depression. Slightly more than half of participants said they had reduced satisfaction with their health between when they first left the military and a few months later. Health satisfaction did not change much between three and nine months after separation.

While physical and mental health was a concern for many veterans, most reported high vocational and social well-being. The majority of participants said they were satisfied with their work and social relationships and that they were functioning well in these areas. According to Vogt, the fact that most participants had high work and social satisfaction "highlights the resilience of the veteran population, and should provide some reassurance to those concerned about the well-being of newly separated veterans."

More than three-quarters of participants said they were in an intimate relationship in the months after they left the military. Almost two-thirds reported that they had regular contact with their friends and extended family and that they were involved in their broader communities.

Over half of participants had found work three months after military separation. While most participants reported high work satisfaction, the study group showed an overall decline in work functioning over the first year after military separation. Functioning declined even though overall employment rates increased. The researchers hypothesized that this decline in work functioning could be due to health concerns, which are known to erode broader well-being over time.

The study also found differences in well-being based on other factors. Enlisted veterans showed consistently poorer health, vocational, and social well-being than officers. Veterans who had deployed to a war zone had more health concerns than veterans who did not deploy.

The researchers have shared their findings with the VA Transition Assistance Program (TAP), which helps Veterans transition back to civilian life. The program is jointly managed by VA and the departments of Defense and Labor, in coordination with the departments of Education and Homeland Security, as well as the U.S. Office of Personnel Management and the U.S. Small Business Administration. According to Vogt, the results could help TAP and other programs that help veterans with readjustment decide how to allocate their resources. Vogt writes that the findings "suggest that maybe we don't need as much focus on promoting employment right now, and need more emphasis on treatment of mental/physical health conditions."

The researchers say their findings have implications not only for VA but for the wide spectrum of organizations nationwide--more than 40,000 in all--that provide programs, services, and support for veterans making their transition back to civilian life. Historically, much of the support for veterans leaving the military has primarily focused on providing employment and educational assistance and informing veterans of their benefits. But the findings suggest that veterans' health concerns should be prioritized, says Vogt. Interventions should also target at-risk subgroups of veterans. The researchers concluded that addressing newly separated veterans' health concerns could promote their broader well-being and longer-term readjustment.

Vogt points out the importance of addressing veterans' readjustment challenges before they worsen and have a chance to erode broader well-being. She says this may require re-evaluating support methods. "Given that most transition support is targeted to veterans with the most acute or chronic concerns," she says, "this recommendation may require rethinking how veteran programs prioritize their efforts. While it makes sense to target resources to those with greatest need, it is better to support individuals before their concerns become chronic when we can."

Work is underway to expand on this study using the same study group. The research team is analyzing how veterans' health and well-being changes in the second and third year after leaving service, as well as how veterans' initial health status impacts their subsequent well-being in other areas.