WCS has released heartbreaking footage of rescued African gray parrots from the Republic of Congo where thousands were destined for the illegal pet trade. 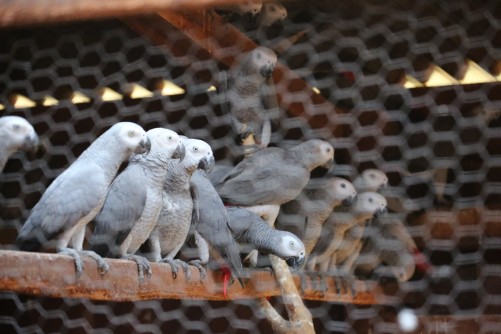 Thousands of parrots destined for the illegal wildlife trade have been rescued in the Republic of Congo.

Newswise — BRAZZAVILLE, Republic of Congo (November 14, 2017) – WCS has released heartbreaking footage of rescued African gray parrots from the Republic of Congo where thousands were destined for the illegal pet trade. The parrots – many of which were injured – were confiscated from wildlife traffickers by rangers and are being held in a rescue facility constructed and maintained by WCS.

Wildlife traffickers catch the parrots in glue traps sometimes by the hundreds. Conservationists estimate an astounding 20 parrots die for every one that makes it into a pet store. Prices on the illegal market for wild parrots have quintupled over the last year leading to an explosion of trafficking.

A team of veterinarians and animal care staff from the Bronx Zoo are bringing the rescued parrots back to health. Many parrots have already succumbed to their injuries or have died from illness or stress.  But almost 900 have been successfully repatriated into the wild, with more released every day.

WCS constructed a rehabilitation facility to take care of the parrots so they can be released back into the wild, with a second facility to open soon. Vets and bird department staff from WCS’s Bronx Zoo recently traveled to Congo to help provided expertise on the parrots’ care. In addition, WCS has partnered with the Congolese government to increase patrols around trafficking routes and launch more investigations into trafficking networks. A special campaign has been set up to support these efforts.

“It was heartbreaking to see so many injured parrots struggling to stay alive,” said David Oehler, Curator for Ornithology with WCS’s Bronx Zoo. “The WCS Congo veterinary staff is making heroic efforts to save as many parrots as possible, and we were honored to provide our expertise and assistance.”

WCS says the parrots were probably destined for the neighboring Democratic Republic of Congo, where they would eventually be smuggled to key markets in Europe and the Middle East.

Last year, WCS, our government partners, and other NGOs successfully advocated having the African grey parrot transferred from Appendix II to Appendix I of the Convention on International Trade in Endangered Species (CITES) at the CITES meeting in Johannesburg. Now that the species is in Appendix I, all international commercial trade is prohibited. But without proper enforcement, smuggling continues, and unscrupulous traffickers continue to reap profits.

The issue of illegal trade from Congo to DRC will be discussed at next month’s CITES Standing Committee to be held in Geneva from November 27th through December 1st.

The African grey parrot has experienced significant population declines throughout its range in West, Central and East Africa. It is extremely rare or locally extinct in Benin, Burundi, Kenya, Rwanda, Tanzania and Togo. This once very abundant species of the forests of West, Central, and East Africa is unfortunately now threatened by out of control international trade. CITES Appendix I, and strong enforcement by all countries, is critical to stopping this illegal trade.

In Ghana alone, African grey parrot populations are estimated to have declined by 90-99 percent and in many other parts of their range, forests that were once full of their “music” are now eerily quiet.

“Traffickers are vacuuming up African gray parrots from Africa’s forests,” said Emma Stokes, WCS Regional Director for Central Africa “This heartbreaking footage should serve as a wake-up call to any prospective buyers of parrots to avoid them unless they come from a highly reputable dealer and you are absolutely certain they were bred in captivity and not taken from the wild.”