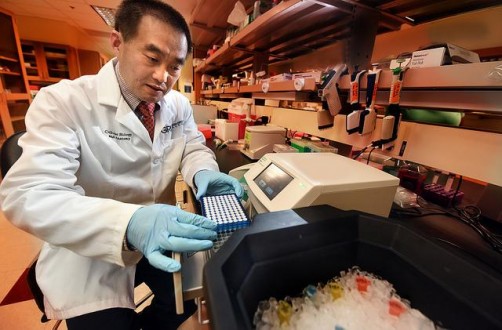 This is Dr. Yutao Liu, vision scientist and human geneticist in the Department of Cellular Biology and Anatomy at the Medical College of Georgia at Augusta University.

Newswise — Scientists have found a variation of the miR-182 gene in patients with primary open-angle glaucoma that results in this overexpression, said Dr. Yutao Liu, vision scientist and human geneticist in the Department of Cellular Biology and Anatomy at the Medical College of Georgia at Augusta University.

Its impact appears to reduce the ability of the cells in the eye's trabecular meshwork to continually move the clear aqueous humor out of the front of the eye and dump it into the body's general circulation, said Liu, corresponding author of the study in the journal Investigative Ophthalmology & Visual Science.

"Every 90 minutes, it turns over," Liu said of the typically balanced process. Since there is no direct blood supply to the front of the eye, the ciliary body just under the colored portion of the eye uses nearby blood to make the fluid to nourish and oxygenate the area, while trabecular meshwork cells near the cornea scoop it up then dump it - along with waste products - back into the circulation.

In glaucoma, there is a problem with outflow, fluid production or both, which results in increased pressure inside the eyeball that damages the optic nerve and can destroy vision. While current therapies help normalize pressure, they typically only slow disease progression.

In the search to learn more about what causes and could better control the disease, the scientists did a genetic analysis of eye tissues and fluids from the National Eye Institute Glaucoma Human Genetics Collaboration Heritable Overall Operational Database, or NEIGHBORHOOD, consortium of 3,853 people with primary open-angle glaucoma and 33,480 healthy controls.

They consistently found higher expression of miR-182 in the different eye tissues they examined from patients with high-tension glaucoma. For example, miR-182 expression in the aqueous humor was twofold higher in high-tension glaucoma patients than controls. Liu notes that since all glaucoma patients were under treatment, their medication's impact on those levels could not be ruled out, but he suspects that increased expression is a hallmark of the disease state.

Liu recently received a two-year grant from the Bright Focus Foundation (brightfocus.org/ ) that is enabling next-step studies such as exploration of the impact of current drug therapy on miR-182. Elevated miR-182 expression already is associated with premature aging of the eye and, when MCG scientists mimic premature aging by applying hydrogen peroxide, miR-182 levels increase.

Now, they are also are looking at the impact on the trabecular meshwork cells' ability to take up aqueous humor and deliver it back to the circulation.

Adding color to the fluid is easing their ability to watch its transport, and 3-D imaging is providing additional insight into how the cells are functioning. The additional insight will help answer questions like whether trabecular meshwork cells become stiff and less capable of making the pores that let fluid come onboard for their endless transport task as Liu suspects. He's also looking at the impact on the ability of trabecular meshwork cells to make and send out fluid-filled pockets called exosomes that may enable the cells to communicate.

Further genetic analysis will also enable identification of additional targets of miR-182. "If we find some targets that constantly change in the eye with glaucoma, then we may be able to find some small chemicals to target those genes in the eye," he said of these "druggable" targets. Longer-term goals are therapies that more directly target the major pathway in this typically age-related disease.

One known miR-182 target is CHEK2, a known tumor suppressor and suspected genetic risk factor for high-tension glaucoma. CHEK2 has been associated with an enlargement of the tip of the optic nerve that indicates high-pressure damage.

Mutations of miR-182 have been associated with a wide range of disorders, including insomnia and depression, and elevated expression appears to impact genes that regulate the body's circadian rhythm. It also appears to have a wide impact on normal body regulation from DNA repair to the immune system. In the eye, it's normally highly expressed in the retina, where it appears to play a role in normal visual function, but has not been clearly associated with disease in this back portion of the eye.

A microRNA, or miRNA, like miR-182 is a small non-coding RNA molecule, which means, rather than actually producing proteins like regular DNA, it helps regulate protein production. There are several hundred of these in each tissue of the body, Liu said.

Known risk factors for glaucoma in addition to age and elevated intraocular pressure, include family history, African ancestry and genetic factors. Primary open-angle glaucoma affects about 1 percent of Americans, according to The Glaucoma Foundation. A percentage of those patients have normal-tension glaucoma, experiencing classic problems such as optic nerve damage and vision loss, despite normal eye pressures. The majority of patients with the miR-182 variation in the study had high-tension glaucoma, Liu noted.