How Errors in Divvying Up Chromosomes Lead to Defects in Cells

Note to our readers: Echoing the sentiments NIH Director Francis Collins made on his blog, the National Institute of General Medical Sciences (NIGMS) is making every effort during the COVID-19 pandemic to keep supporting the best and most powerful science. In that spirit, we’ll continue to bring you stories across a wide range of NIGMS topics. We hope these posts offer a respite from the coronavirus news when needed.

Mitosis is fundamental among all organisms for reproduction, growth, and cell replacement. When a cell divides, it’s vital that the two new daughter cells maintain the same genes as the parent.

In one step of mitosis, chromosomes are segregated into two groups, which will go into the two new daughter cells. But if the chromosomes don’t divide properly, one daughter cell may have too many and the other too few. Having the wrong number of chromosomes, a condition called aneuploidy, can trigger cells to grow out of control. 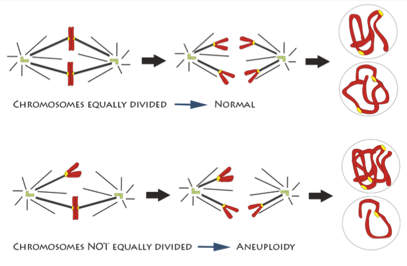 How chromosome segregation errors disrupt cell division is an important area of research. Although it’s been studied for decades, new aspects are still being uncovered and much remains unknown. NIGMS-funded scientists are studying different aspects of mitosis and chromosome segregation. Understanding the details can provide vital insight into an essential biological process and may also be the key to developing better drugs for cancer and other diseases.

Decoding the Mechanics of Chromosome Segregation

Sophie Dumont, Ph.D., of the University of California, San Francisco, originally trained in physics, but fell in love with biology during graduate school. Her background in physics continues to inform her work, which focuses largely on the mechanical forces that help cells organize themselves during mitosis.

In particular, she’s studying the mitotic spindle (the structure of microtubule filaments that pulls the chromosome pairs apart) and the kinetochore (the protein structure that attaches the chromosome to the spindle). 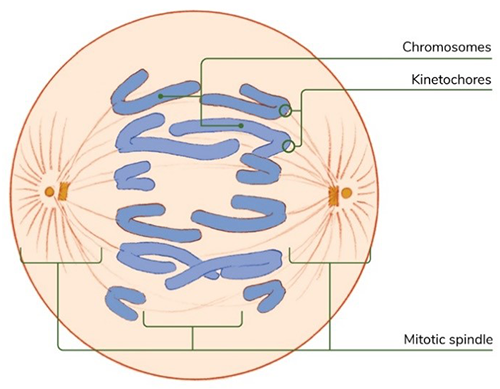 The mitotic spindle and kinetochores are essential to cell organization during mitosis. Credit: Judith Stoffer and NIGMS.

“We’re trying to figure out how these structures, which are made of many small parts, robustly generate and respond to the force that’s needed to move the chromosomes over large distances in the cell,” she explains.

Dr. Dumont’s lab works with human cells, but she also uses a surprising model—kidney cells from rat kangaroos, a small marsupial. Rat kangaroo cells can be helpful because they have many fewer chromosomes than human cells, which makes it easier to follow a single chromosome’s trajectory during mitosis.

“Over millions of years, evolution has found a lot of clever solutions to the challenges of proper chromosome segregation,” she says. “What’s exciting to me about my research is that not only are we making discoveries that have implications for human health, but we are gaining an understanding of how nature can build a diversity of complex structures with very simple parts.”

Recreating Important Processes in the Lab

Chip Asbury, Ph.D., a scientist at the University of Washington in Seattle, also studies the mechanics of mitosis and chromosome segregation.

“I think of the mitotic spindle as a kind of machine,” he says. “Its job is to move the chromosomes in the appropriate way, while at the same time detecting any errors that may have occurred.”

Dr. Asbury’s lab conducts experiments with the spindle and related components that have been isolated or reconstructed outside the cell. Because kinetochores are made of hundreds of proteins, isolating individual parts of them allows the lab to do experiments they couldn’t do with whole cells.

One experiment introduces tiny artificial cargoes to the kinetochores, enabling Dr. Asbury to recreate and observe how the microtubules form attachments. In addition, Dr. Asbury has a project focusing on mitosis in trypanosomes, a unicellular organism that causes sleeping sickness. This work is a collaboration with Bungo Akiyoshi, Ph.D., and it may lead to new drugs for targeting these parasites. 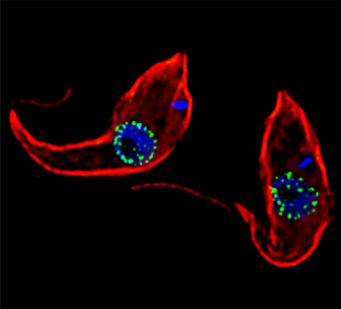 “I’m drawn to studying these kinds of fundamental processes because not only are they fascinating, but all life depends on them,” Dr. Asbury says. “Ultimately, our ability to fight complex diseases is limited by our fundamental lack of understanding about what’s happening inside the cell. Understanding how kinetochores work will eventually enable us to develop smarter drugs.” 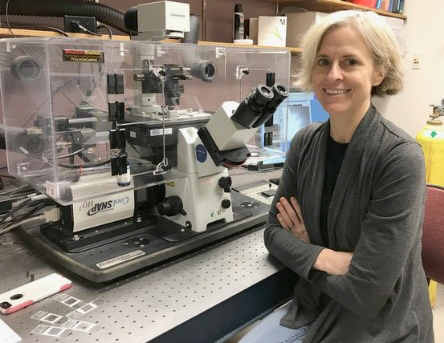 Jennifer (Jake) DeLuca, Ph.D., a researcher at Colorado State University in Fort Collins, is looking at how errors in chromosome segregation can lead to cancer. She aims to determine whether it’s possible to develop cancer drugs that target defective segregation.

“The strength of the attachment of the microtubules at the kinetochore must be very tightly controlled,” she explains. “We know that these attachments are misregulated in cancer cells, so we’re working backwards to find out why that is the case.”

To study the chromosome malfunctions seen in cancer, Dr. DeLuca and her team recreate them in human cell models. They transform the cells with cancer-causing genes and then use a number of imaging techniques to watch mitosis in the cells. This allows them to get at the heart of how different proteins regulate microtubule connections in cancer cells. 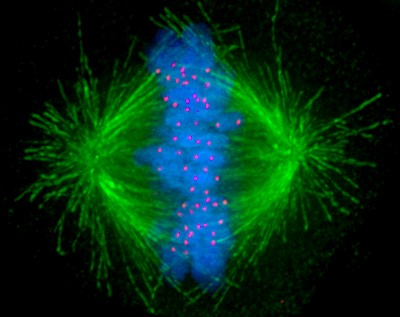 A human cell undergoing mitosis with the microtubules shown in green, chromosomes shown in blue, and kinetochores shown in red.

One of the long-term goals of this research is to figure out how to target these proteins with drugs. “Although we are a basic research lab, not a cancer lab, our work has opened up a huge toolbox of targets to explore,” Dr. DeLuca concludes. “The integration of basic research with clinical research is critical for developing effective new therapies.”