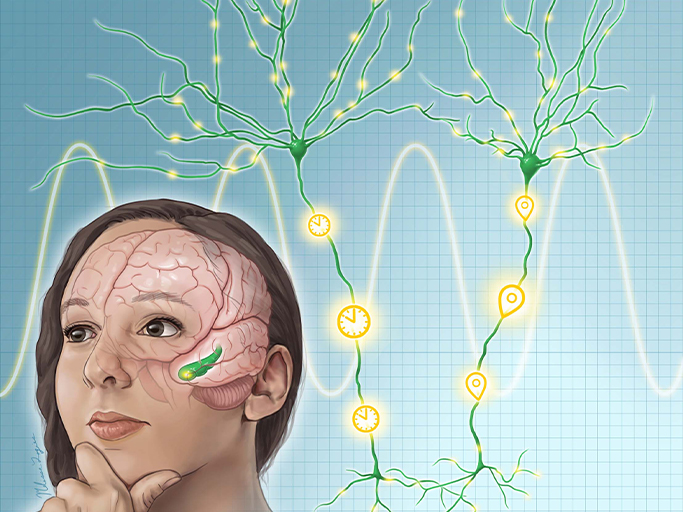 Hippocampal neurons create spatial and temporal “maps” of our world. Brain waves called “theta rhythms” help organize the activity of these neurons. A study by Bradley Lega, M.D., and colleagues determined how a group of neurons known as time cells allow the brain to correctly mark the order of events and assist in memory. 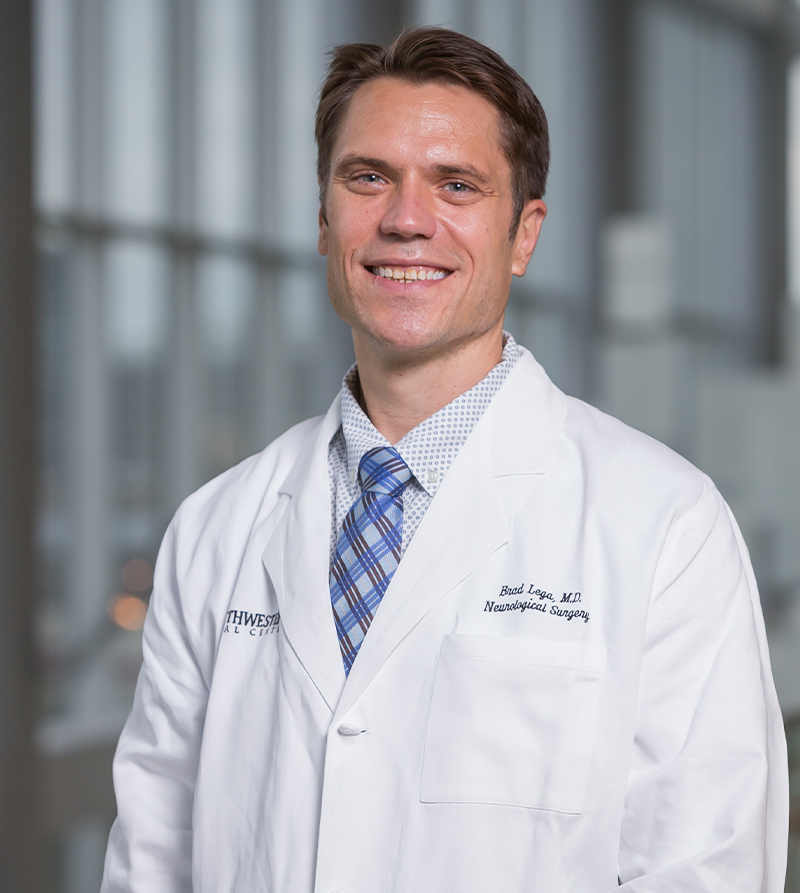 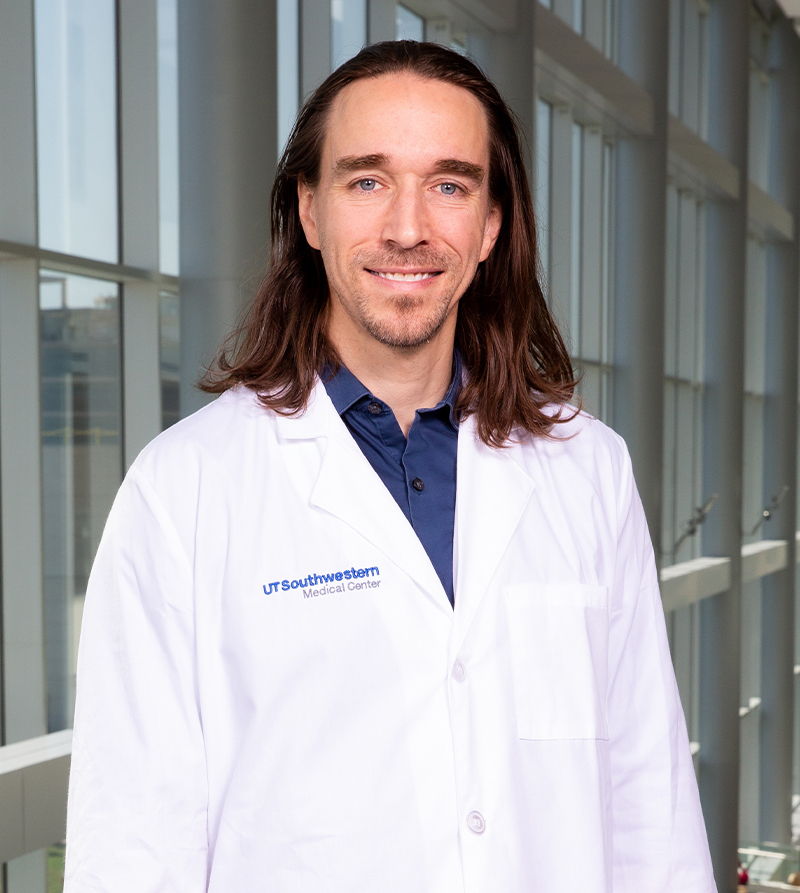 Newswise — DALLAS – Dec. 8, 2020 – Two studies led by UT Southwestern researchers shed new light on how the brain encodes time and place into memories. The findings, published recently in PNAS and Science, not only add to the body of fundamental research on memory, but could eventually provide the basis for new treatments to combat memory loss from conditions such as traumatic brain injury or Alzheimer’s disease.

About a decade ago, a group of neurons known as “time cells” was discovered in rats. These cells appear to play a unique role in recording when events take place, allowing the brain to correctly mark the order of what happens in an episodic memory.

Located in the brain’s hippocampus, these cells show a characteristic activity pattern while the animals are encoding and recalling events, explains Bradley Lega, M.D., associate professor of neurological surgery at UTSW and senior author of the PNAS study. By firing in a reproducible sequence, they allow the brain to organize when events happen, Lega says. The timing of their firing is controlled by 5 Hz brain waves, called theta oscillations, in a process known as precession.

While recording electrical activity from the hippocampus in 27 volunteers’ brains, the researchers had them do “free recall” tasks that involved reading a list of 12 words for 30 seconds, doing a short math problem to distract them from rehearsing the lists, and then recalling as many words from the list as possible for the next 30 seconds. This task requires associating each word with a segment of time (the list it was on), which allowed Lega and his team to look for time cells. What the team found was exciting: Not only did they identify a robust population of time cells, but the firing of these cells predicted how well individuals were able to link words together in time (a phenomenon called temporal clustering). Finally, these cells appear to exhibit phase precession in humans, as predicted.

“For years scientists have proposed that time cells are like the glue that holds together memories of events in our lives,” according to Lega. “This finding specifically supports that idea in an elegant way.”

In the second study in Science, Brad Pfeiffer, Ph.D., assistant professor of neuroscience, led a team investigating place cells – a population of hippocampal cells in both animals and humans that records where events occur. Researchers have long known that as animals travel a path they’ve been on before, neurons encoding different locations along the path will fire in sequence much like time cells fire in the order of temporal events, Pfeiffer explains. In addition, while rats are actively exploring an environment, place cells are further organized into “mini-sequences” that represent a virtual sweep of locations ahead of the rat. These radar-like sweeps happen roughly 8-10 times per second and are thought to be a brain mechanism for predicting immediately upcoming events or outcomes.

Prior to this study, it was known that when rats stopped running, place cells would often reactivate in long sequences that appeared to replay the rat’s prior experience in the reverse. While these “reverse replay” events were known to be important for memory formation, it was unclear how the hippocampus was able to produce such sequences. Indeed, considerable work had indicated that experience should strengthen forward, “look ahead” sequences but weaken reverse replay events.

To determine how these backward and forward memories work together, Pfeiffer and his colleagues placed electrodes in the hippocampi of rats, then allowed them to explore two different places: a square arena and a long, straight track. To encourage them to move through these spaces, they placed wells with chocolate milk at various places. They then analyzed the animals’ place cell activity to see how it corresponded to their locations.

Particular neurons fired as the rats wandered through these spaces, encoding information on place. These same neurons fired in the same sequence as the rats retraced their paths, and periodically fired in reverse as they completed different legs of their journeys. However, taking a closer look at the data, the researchers found something new: As the rats moved through these spaces, their neurons not only exhibited forward, predictive mini-sequences, but also backward, retrospective mini-sequences. The forward and backward sequences alternated with each other, each taking only a few dozen milliseconds to complete.

“While these animals were moving forward, their brains were constantly switching between expecting what would happen next and recalling what just happened, all within fraction-of-a-second timeframes,” Pfeiffer says.

Pfeiffer and his team are currently studying what inputs these cells are receiving from other parts of the brain that cause them to act in these forward or reverse patterns. In theory, he says, it might be possible to hijack this system to help the brain recall where an event happened with more fidelity. Similarly, adds Lega, stimulation techniques might eventually be able to mimic the precise patterning of time cells to help people more accurately remember temporal sequences of events. Further studies with “In the past few decades, there’s been an explosion in new findings about memory,” he adds. “The distance between fundamental discoveries in animals and how they can help people is becoming much shorter now.”

Caption: Hippocampal neurons create spatial and temporal “maps” of our world. Brain waves called “theta rhythms” help organize the activity of these neurons. A study by Bradley Lega, M.D., and colleagues determined how a group of neurons known as time cells allow the brain to correctly mark the order of events and assist in memory.