How to Control Traffic on Cellular Highways 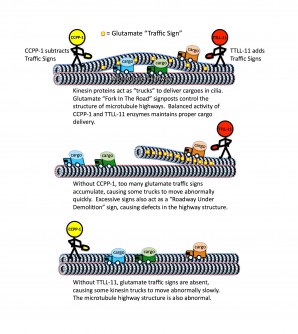 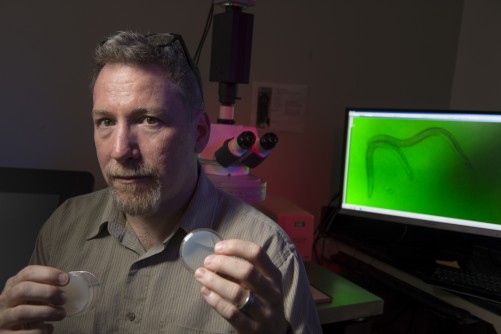 Robert O'Hagan, assistant research professor in the Human Genetics Institute of New Jersey and the Department of Genetics at Rutgers University–New Brunswick, with C. elegans – a microscopic roundworm – in the background. 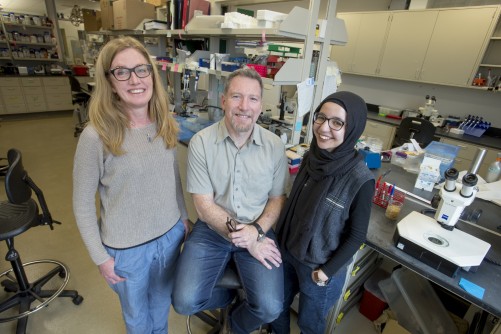 “To stay alive and function, every cell in our body needs to transport cargoes to the place they’re needed inside the cell, in the right amount and at the right time,” said Robert O’Hagan, lead author of a new study and assistant research professor in the Human Genetics Institute of New Jersey and the Department of Genetics at Rutgers University–New Brunswick. “So there has to be a lot of organization in how transport inside the cell is regulated, and now we know a lot more about how that happens.”

The study, published online today in Current Biology, has implications for future therapies for spinal cord and nerve injuries and neurodegenerative diseases. Co-authors include Malan Silva, who earned a doctorate at Rutgers; Winnie Zhang, Sebastian Bellotti and Yasmin Ramadan, who received bachelor’s degrees at Rutgers; and Professor Maureen M. Barr, who heads the Barr Lab in the Human Genetics Institute of New Jersey and the Department of Genetics in the School of Arts and Sciences.

The highways inside cells are called microtubules, and proteins called kinesins and dyneins act like motors and are essentially the cargo trucks in cells, O’Hagan said. The motor proteins drive cargoes around microtubule highways, but a central question in cell biology is how intracellular transport and the highway systems are organized. Questions include how the motor proteins know where to go and how fast they need to be.

Te Rutgers-led team studied C. elegans, a microscopic roundworm, and looked at microtubules in cilia – hair-like organelles that protrude from cells and perform sensory tasks. The scientists found that TTLL-11 is an enzyme that puts traffic signs composed of the amino acid glutamate on the microtubule highways to regulate the speed of the protein cargo trucks. CCPP-1 is an enzyme that takes down these glutamate traffic signs when there are too many of them, according to O’Hagan.

“Working together, they seem to regulate the speed of the motors that move cargoes on the microtubular highways,” he said.

The scientists also found that the glutamates can also act as a “roadway under construction” sign, changing the highways’ structure, he said.

Intriguingly, these enzymes are involved in degenerating cells that are crucial for vision, as well as neurons, O’Hagan said. The study suggests that future therapies targeting these enzymes might counter neurodegenerative diseases or nerve damage, including spinal cord injuries, he said.

“The picture that’s emerging from our and other labs’ research is that, for neurons to regenerate after injury or to survive in the brain, they need to be able to reorganize their microtubular highways and their cargo trucks in order to bring the right cargoes around to rebuild or maintain the cell,” he said.

“There’s a lot more to be discovered,” he added. “Our next step is to see how this works in the spinal cord in mammals, so we’ve started studies of rat spinal cord neurons.”

This research was funded by grants from the National Institutes of Health and the New Jersey Commission on Spinal Cord Research. 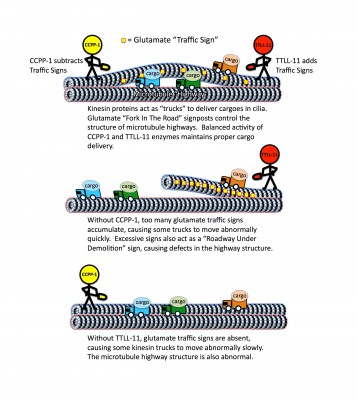 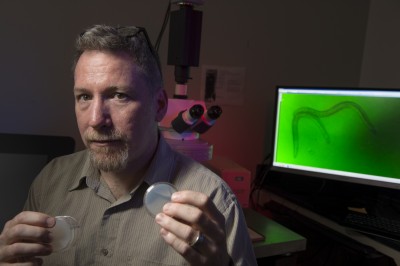 Caption: Robert O'Hagan, assistant research professor in the Human Genetics Institute of New Jersey and the Department of Genetics at Rutgers University–New Brunswick, with C. elegans – a microscopic roundworm – in the background. 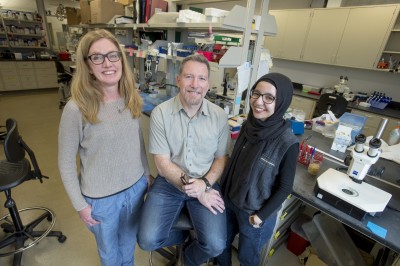