How to talk to children about war in Ukraine

ASU professor: Parents have to expect kids will see horrific images from Ukraine 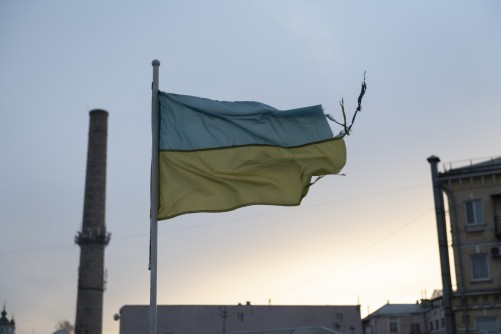 A weathered Ukrainian flag flies in the Podil district of Kyiv, Ukraine.

Unless one has sworn off all technology, the horrific images from Russia’s invasion of Ukraine are unavoidable.

They’re on TV. In your phone. Scattered across websites and played out on social media.

Given the avalanche of information, how should parents address the war with their children? What should they say? How should they act?

To get those answers, ASU News talked to Abigail Gewirtz, a Foundation Professor in Arizona State University’s Department of Psychology whose research examines ways to strengthen families affected by traumatic stressors. Gewirtz is the author of “When the World Feels Like a Scary Place,” published in July 2020.

“This is what I do,” Gewirtz said. “How to talk to kids about scary things.”

Question: Let’s start with a general question: What advice would you give parents if they came to you and said, “What should we tell our children about this war?”

Answer: So, the first question I would ask is, “How old is your child?” And the second question I would ask is, “How do you feel about it?” Obviously, kids over time, their needs change and what they understand changes. And so, your 3-year-old understands very differently from your 5-year-old, who understands differently from your 12- and 16- year-olds. But the other issue is how personal is it to you? If you have Ukrainian family, you probably are having some really big feelings about what's going on. So the most important thing is for parents to think about, “What does this mean to me? How do I feel about it?” And then think through, if you have the opportunity to have a planned conversation, think about how you can deal with your own feelings and what it is you want to say. And then, how can you truly listen to your children and understand what it is they're asking you or telling you?

Q: You mentioned the ages of kids. Is there a certain age where parents should say, “I’m not going to have this conversation because they’re too young to understand?”

A: You can never assume that your child doesn't know, and wouldn't you rather they hear it from you than from someone else on the playground? If a child's only at home, and that applies to a lot of kids under the age of 3, then you can assume that you can pretty much be in control of what happens. But even a 5-year-old in kindergarten, they’re going to know. They just know. And so, all our efforts are to sort of pretend that it doesn’t happen or it’s not a big deal, so don’t worry about that. Sometimes when we do that to them, it just makes them feel more anxious. Because it’s the thing that’s not talked about. And it becomes a big monster.

Q: So, the natural tendency for parents to protect their children from images like these might be wrong?

A: So, back on 9/11, my son was 6 years old. And we thought he had no idea because we kept the TV off. And one day he came home, and he said he had a play day at school. We said, “How did it go? What did you do while you were playing?” He said, “Great. And then we saw people jumping out of buildings that had been hit by a plane.” We were horrified. We said, “Oh, really?” He said, “Yeah, they were jumping out of really tall windows.” That’s the first story I tell in my book. These are essential conversations for parents and kids.

Q: Should the accessibility of this war on technology and social media inform parents on how they communicate with their children?

A: The fact that it’s so available on social media means that it will get their attention. And kids see things that we don’t see. We have no idea. I mean, you can’t imagine what kids see, and that can be a very scary thing. A generation ago, parents could monitor what was going on. You pretty much knew what your child was seeing and hearing. But not anymore. Even the best efforts to control a child’s device can be not effective. So wouldn’t you rather be the one to have the conversation? If you have these conversations with them all the time, then they’re more likely to talk to you when something is frightening and scary to them.

Q: So, what would your advice be to parents who want to talk to their children about the war?

A: Feel OK talking about it and then pick a time when you are device-free and when you’re not distracted. And you could say, “I’m betting you’ve been hearing about a war that is happening. It’s a long way away, and I was just wondering what you have been hearing about it.” Find a map, too. Because one of the things I think we learned on 9/11 is so many children thought that hundreds of planes were crashing into hundreds of buildings because they saw the same footage over and over again. And it was happening in their town because they didn’t understand the concept of distance. So, getting a map out and helping kids to understand how far away it is, or this is how many hours we’d have to fly on a plane all the way over there can help. But be prepared to accept the fact that your child may have seen pretty awful things on social media.

Q: Although children in the United States are distanced from this war, is there trauma they can experience just from seeing the images coming from Ukraine?

A: I really get leery of using the word trauma. In the psychiatric terminology, in order to diagnose someone with post-traumatic stress disorder, watching something on television isn’t sufficient. And these kids see horrible images in movies or in video games. But it can be very scary to kids. It might not be "big T" traumatic, but it’s scary, and the natural questions that kids ask are, “Could this happen here? Could this happen in my world?” Validate your kids’ emotions and then listen to them. Hear what they say, because often what they say isn’t what you think they’re going to say. And help them problem-solve. Help them feel better. Don’t just leave things there. Ask them if they feel anxious about it, and then figure out how you can deal with that and help them feel better.

Q: How important is it for parents to exhibit a sense of calm when having these conversations?

A: The biggest bonus of being calm is that you’re not in your own head and you can really listen. You can hear your kid and tune into what they’re feeling. So, ask them. “How are you feeling?” Or “Do you feel this in your stomach? Because when I get worried, I sometimes get a stomach ache." That helps them label and identify what they’re feeling, and then parents can validate those feelings.