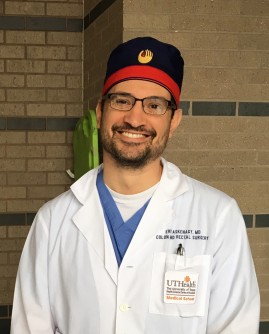 Newswise — Hurricane Harvey dumped 51 inches of rain on greater Houston and for Harris Health System’s Lyndon B. Johnson Hospital, the ensuing floodwaters—up to six feet on some connecting roadways—made it a virtual island. During the 5-day storm (Aug. 25-30), staff maintained hospital operations, took in 180 evacuees and performed the first-ever brain surgery in the hospital’s 28-year history.

“This is a story about what a team does in a crisis,” says Alan Vierling, executive vice president and administrator, LBJ Hospital. “It’s a story about professionals who got in this business to save lives. It’s a story about people who don’t quit, don’t give up, solve every problem and overcome every hurdle.”

On day three of the storm, a 54-year-old man came into the hospital’s emergency center by military truck that was rescuing residents from floodwaters. The man was on an all-terrain vehicle (ATV) searching for a lost child when he hit an embankment, fell off and hit his head.

“When he came in, he was alert and talking, but then his condition quickly got worse,” says Merry Philip, administrative director, Nursing, LBJ Hospital. “He soon started to show signs of distress.”

Dr. Erik Askenasy, surgeon on-call and a member of the hospital’s ride-out medical team, knew the patient’s life was at stake after the patient’s CT scan revealed significant bleeding in the space between the skull and brain, and in one of the brain’s lobes.

“When a large bleed occurs inside the skull, you become concerned that the increased pressure will cause the brain to herniate, which can lead to life-threatening consequences,” he says.

As a Level III trauma center, LBJ Hospital does not perform neurosurgery. The standard practice is to immediately transport brain-injured patients to a Level I trauma hospital. However, the storm’s relentless rain and high winds made the roads impassable and grounded all helicopter transports.

“We even contacted the U.S. Coast Guard,” Philip recalls. “They said they couldn’t get a helicopter to us until morning. We said, ‘OK. Our job is to keep this patient alive until morning.’”

After more failed attempts to transport the patient, Askenasy, a colorectal surgeon and assistant professor, Surgery Department, McGovern Medical School at the University of Texas Health Science Center at Houston, suggested the hospital team perform a craniotomy—brain surgery to remove the fist-sized blood clot and relieve the brain’s swelling. With hospital leadership’s approval, Askenasy met and got final consent from the patient’s family.

“At a moment like that, you pray,” he says. “You ask God for wisdom, understanding and peace. Then you realize you have a job to do and you go do it.”

Askenasy had some neurosurgery experience. He was a resident in that discipline for two years before changing to general surgery. However, that was 10 years ago. The operating team prepared by cobbling together essential equipment and gleaning as much knowledge from others and the Internet.

“When we learned we would have to perform brain surgery, we did our research to learn what we needed to do,” says Ashley Acosta, nurse clinician, Operating Room, LBJ Hospital. “We surveyed our available drill burrs and supplies. Dr. Askenasy was very calm. He met with us and made us feel confident in our abilities.”

Midway into the two-hour procedure, the Coast Guard notified hospital officials that a helicopter was available in an hour to transport the patient. The team successfully removed the blood clot and prepared him for transport.

Helicopters rarely land at LBJ Hospital, so staff had to create a landing site. The hospital’s engineering director, a military veteran, used his cellphone to plot coordinates, relay them to the pilot and used a strobe flashlight to guide the landing in a partially-empty hospital parking lot.

The transport was successful. Three days later, while still on hurricane duty, the operating team received news that the patient was doing well—alert, talking and already requesting to go home.

“I’ve been blessed with opportunities to operate with medical missions teams," Askenasy says. "When you're in a rural hospital in a third-world country, you quickly learn that many of the things available to you in the U.S. are not really needed to complete the surgery or to do it safely. You learn to think outside the box. A little ingenuity goes a long way.”