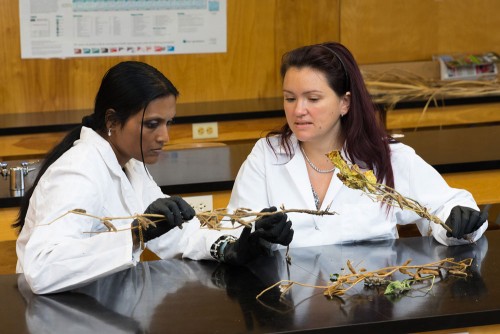 South Dakota State University field crops pathologist Febina Mathew and Kristina Petrović, a visiting scientist from Serbia, examine soybeans for evidence of stem canker, focusing on the nodes or joints. Not only is this disease hard to distinguish from other soybean diseases, but the pathogen can be transmitted through the seeds. 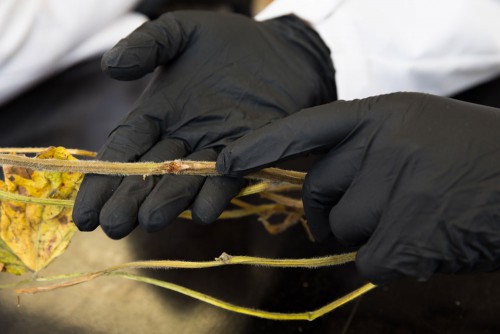 Reddish brown lesions, particularly at the joint or node, are indications of soybean stem canker. 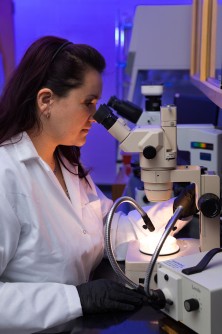 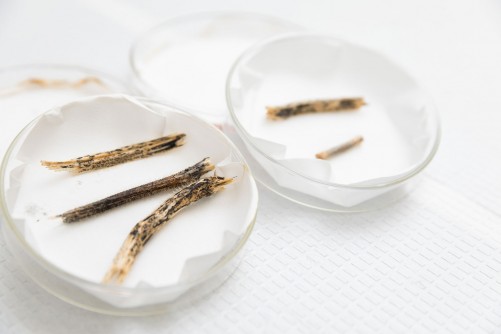 Under moist conditions, the Diaporthe pathogens on these soybean stems multiply.

Newswise — Scouting soybean fields and identifying diseases are some of the tasks that Kristina Petrović performs as a research associate at the Institute of Field and Vegetable Crops in Serbia. She is expanding her work on pathogens that affect soybeans as a visiting scientist at South Dakota State University, where she is working with field crops pathologist Febina Mathew, an assistant professor in the Department of Agronomy, Horticulture and Plant Science.

“I am happy when I find disease,” Petrović quipped. She was the first to report that three species of Diaporthe, the pathogen that causes stem canker of soybean, were triggering Phomopsis seed decay in Serbia. Petrović published two papers on her findings in Plant Disease, an American Phytopathological Society journal. When she told the journal editor that she wanted to do postdoctoral research in the United States, he circulated her credentials among the society’s members.

“After four days, Febina invited me to South Dakota State University to examine the Diaporthe species causing soybean disease in the United States,” Petrović recalled. Her 10-month residency, which began in August, is supported by a grant from the Serbian government and funding from the Institute of Field and Vegetable Crops. She also received support for her SDSU research from the North Central Soybean Research Program and the South Dakota Agricultural Experimental Station.

The world has two main types of stem canker—the Northern variety, which likes cool temperatures and affects both South Dakota and Serbian soybeans, and the Southern, which can survive high temperatures. Both types like moisture, Petrović explained.

Plants are infected when raindrops hit pathogen-containing plant residue and splash the fungus spores onto the young soybean plants. “At the end of July or beginning of August, when soybeans are in their pod-fill stage, we see the first symptoms, dark brown lesions the spread up and down the plant,” she said.

“Planting resistant genotypes is the best option for producers,” Petrović explained.  In Serbia, she said, “Our genotypes have good field resistance, but not complete resistance. However, we are trying to find the most resistant or tolerant soybean genotypes.”

Recently plant scientists have seen an increase in soybean diseases caused by Diaporthe (Phomopsis) species in the United States, according to Mathew. Petrović’s research will help identify the pathogens behind this increased disease prevalence.

“I want to know more about the relationship among the Diaporthe species,” said Petrović. To do this, she’ll examine the pathogens’ diversity using phylogenetics. She and Mathew will also screen soybean genotypes to identify sources of resistance to Diaporthe species that will help breeders develop resistant soybean cultivars.

This research will help scientists develop strategies to manage the disease that will benefit farmers not only in the United States, but also in Serbia.