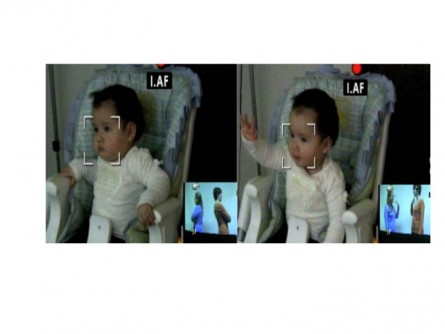 UChicago researchers measured nine-month-old infants' ability to reason about social relationships by studying their responses to videos of people interacting as friends or foes. Researchers have found previously babies look longer at something unexpected.

Newswise — Even before babies have language skills or much information about social structures, they can infer whether other people are likely to be friends by observing their likes and dislikes, a new study on infant cognition has found.

The results offer a new window into humans’ earliest understanding of the social world around them. It suggests that even nine-month-old infants can engage in reasoning about whether the people they observe are friends or not.

“This is some of the first evidence that young infants are tracking other people’s social relationships,” said Amanda L. Woodward, the William S. Gray Professor of Psychology at the University of Chicago and a co-author of the paper. The study “Friends or Foes: Infants Use Shared Evaluations to Infer Others’ Social Relationships,” was published online by Journal of Experimental Psychology: General.

In this study, 64 nine-month-old infants were randomized into groups and then watched videos showing two adults. The adults each ate two foods and reacted in either a positive or a negative way to each food they ate. In some videos the adults shared the same reactions, while in others they reacted differently.

“We depicted evaluations of food because food may provide particularly salient social information,” noted co-author Katherine D. Kinzler, Neubauer Family Assistant Professor of Psychology at the University of Chicago. “Eating with family and friends is inherently social, and so infants might be particularly inclined to use eating behaviors to make inferences about social relationships.”

To investigate whether infants linked food reactions to social relationships, the experiment examined how the infants responded to subsequent videos, which showed the same adults acting either positively or negatively toward each other. In the video showing a positive interaction, the adults greeted each other with smiles and said “Hi!” in a friendly tone of voice. In the other video, the adults turned away from each other, crossed their arms and said “Hmp” in an unfriendly tone of voice.

The research team assessed the infants’ reactions to the videos by measuring the amount of time the babies focused on the paused still screen at the end of each video. Two sets of trained observers coded the infants’ attention. Researchers have found previously that the duration of a baby’s gaze is related to how familiar or unexpected a situation seems to them. “When babies see something unexpected, they look longer, “explained Woodward. “It’s out of place for them and they have to make sense of it.”

The study’s implication is that even at the early age of nine months, babies know that adults who agree with each other tend to act in a friendly way in other contexts. Infants in the study predicted that people who reacted similarly to the two foods were likely to be friends and were taken off-guard when the videos showed something different.

“This study raises questions on how babies think about who gets along and who doesn’t,” said lead author Zoe Liberman, a doctoral student in the University of Chicago Department of Psychology. “Parents will be interested to know that babies are keeping track of what’s going on in the world around them and are making inferences about social interactions that we previously were not aware of before this study.”

“I was surprised to find that babies at this age showed such strong responses,” Woodward said.

The findings provide the first evidence that the roots of a critical aspect of social cognition, reasoning about other people’s social interactions based on those people’s likes and dislikes, can be traced to infancy, according to the authors. They plan future research to look at what other types of cues help infants make these social inferences.