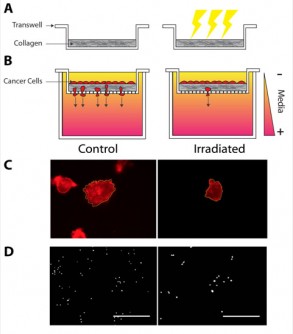 (A) Collagen matrices are prepared inside transwell containers, where one set is treated with clinical doses of radiation. (B) Cancer cell are then seeded on the collagen and allowed to adhere, spread and invade through the matrix. (C) Confocal imaging reveals that the cancer cells seeded on the irradiated matrices have a reduced ability to adhere and, if they do adhere, a reduced ability to spread relative to nonirradiated matrices. (D) When accounting for the reduced efficiency in adherence, the cancer cells display a similar inefficiency in their ability in invade through the collagen of irradiated matrices relative to controls.

Newswise — WASHINGTON, D.C., April 3, 2018 -- Nearly half of all cancer patients receive radiation therapy to curb the growth of malignant cells. But little is known about how ionizing radiation affects the extracellular matrix (ECM), a patchwork of proteins and other biomolecules that surrounds cells and plays a vital role in their shape, movement and signaling functions. One team of researchers from Vanderbilt University aims to unlock how irradiation might alter the mechanical properties of the microenvironment.

The team demonstrated that ionizing radiation can reduce the stiffness of both the ECM of an extracted tumor and an isolated matrix of collagen fibers. Appearing this week in APL Bioengineering’s special issue on the “Bioengineering of Cancer,” from AIP Publishing, their results pave the way for irradiation to be used to create matrices with tailored properties, and suggest that radiation therapy might have effects beyond disrupting cellular DNA.

“We wanted to know how radiation effects the tissues surrounding cells, particularly how this changes the stiffness of the matrix,” said Cynthia Reinhart-King, an author on the paper. “The change in tissue stiffness during tumor growth can be palpable. Stiffness, for example, is what you would look for in breast self-exams.”

As cancer cells grow and become increasingly dysfunctional, the network of biomolecules surrounding them are deposited more and begin cross-linking more, leading to a thicker, stiffer matrix. This tougher ECM is vital for the cancer cells to migrate throughout the body, signal to one another, and form tumors. Targeting the ECM’s stiffness has become a promising tool in attacking cancer cells.

“Twenty years ago, if you had asked what the primary drivers of cancer were and where the primary focus of the research should be, it would have been largely on genetics, and it still is for personalized medicine,” Reinhart-King said.

Infrared spectroscopy revealed that the radiation does not break down individual fibers of collagen, the long, thin structural proteins that act as the matrix's scaffolding. Instead, it softens the matrix by cutting the bonds between these fibers, relaxing the matrix and reducing its stiffness.

Reinhart-King’s team discovered that tumor cells were less likely to spread when their stiff ECMs were replaced with ECMs softened by irradiation. Cells suspended in a stiff matrix were more likely to work their way through the matrix to other side of a serum gradient, analogous to how metastasizing cancer cells break free from their tumors. Softened matrices were more likely to hold cells in place.

Reinhart-King said their findings might enable future fractionated radiation -- longer term bouts of therapy using a lower intensity of radiation than most of today’s therapies. One particular area of interest is determining if softening can reduce nearby blood vessel leaking and improve drug delivery.

“Since there are risks associated with radiation, we’re interested in investigating how fractionated the dose should be,” Reinhart-King said. “The key will be to find the right balance.”