Is there life on mars today and where?

Challenging assumptions about the possibility of modern life on Mars 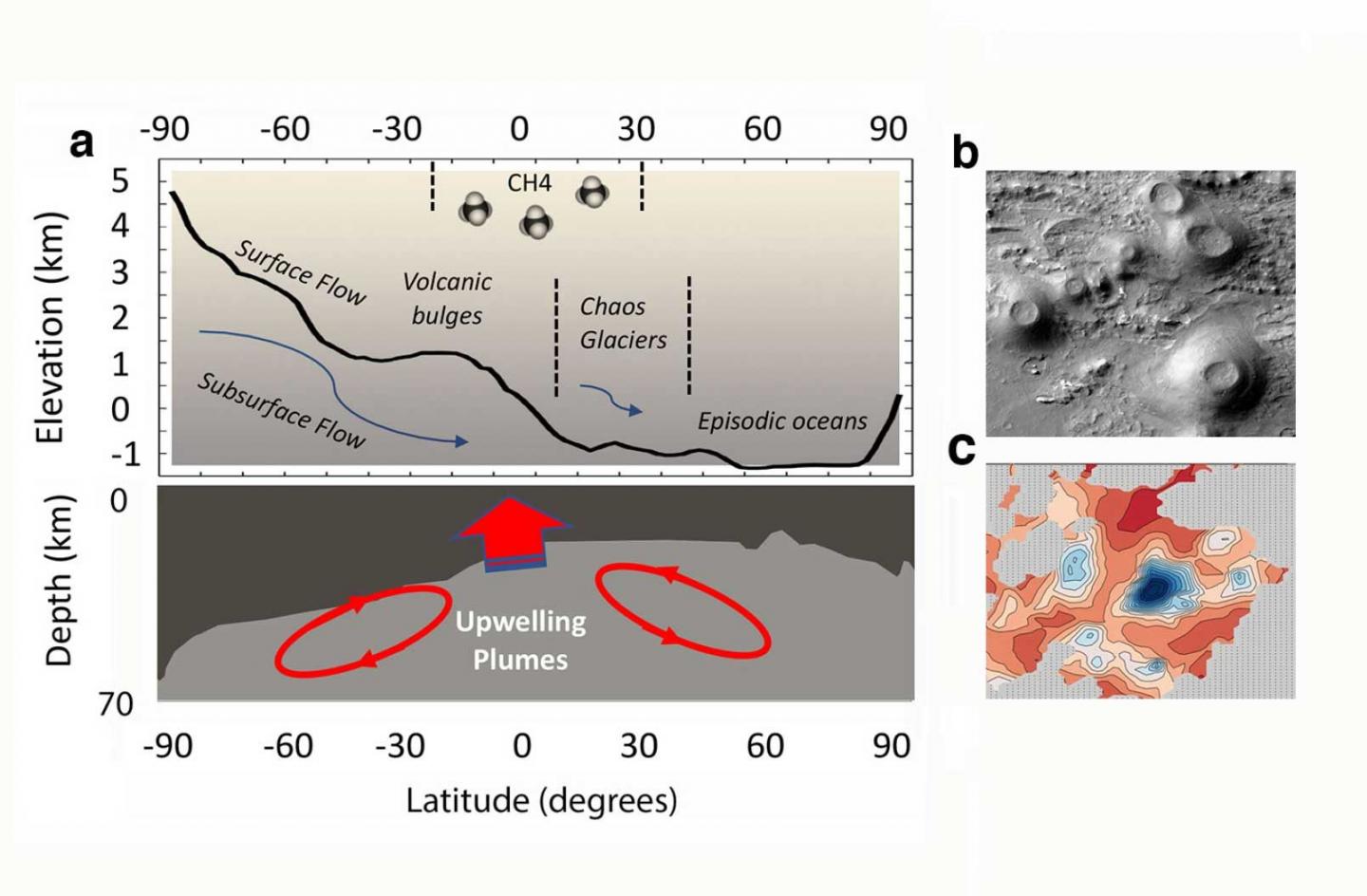 FIGURE 1: Mars Biosphere Engine. a, The zonally averaged Mars elevation from MOLA8 shows how the formation of the planetary crustal dichotomy has driven hydrology and energy flux throughout geological times, creating both conditions for an origin of life, the formation of habitats, and dispersal pathways. While conditions do not allow sustained surface water in the present day, recent volcanic activity and subsurface water reservoirs may maintain habitats and dispersal pathways for an extant biosphere. The origin(s) of methane emissions remain enigmatic, their spatial distribution overlapping with areas of magma and water/ice accumulations at the highland/lowlands boundary. b, Young volcanoes in Coprates Chasma, Valles Marineris estimated to be 200-400 million years old by Brož et al. (2017). c, Regions of subglacial water (blue) detected at the base of the south polar layered deposits by the Mars Advanced Radar for Subsurface and Ionosphere Sounding (MARSIS) instrument. ).

Newswise — March 16, 2021, Mountain View, CA - In a comment published today in Nature Astronomy, Dr. Nathalie Cabrol, Director of the Carl Sagan Center for Research at the SETI Institute, challenges assumptions about the possibility of modern life on Mars held by many in the scientific community.

As the Perseverance rover embarks on a journey to seek signs of ancient life in the 3.7 billion years old Jezero crater, Cabrol theorizes that not only life could still be present on Mars today, but it could also be much more widespread and accessible than previously believed. Her conclusions are based on years of exploration of early Mars analogs in extreme environments in the Chilean altiplano and the Andes funded by the NASA Astrobiology Institute. It's essential, she argues, that we consider microbial habitability on Mars through the lens of a 4-billion-year-old environmental continuum rather than through frozen environmental snapshots as we tend to do. Also critical is to remember that, by all terrestrial standards, Mars became an extreme environment very early.

In extreme environments, while water is an essential condition, it is far from being enough. What matters most, Cabrol says, it's how extreme environmental factors such as a thin atmosphere, UV radiation, salinity, aridity, temperature fluctuations and many more interact with each other, not only water. "You can walk on the same landscape for miles and find nothing. Then, maybe because the slope changes by a fraction of a degree, the texture or the mineralogy of the soil is different because there is more protection from UV, all of a sudden, life is here. What matters in extreme worlds to find life is to understand the patterns resulting from these interactions". Follow the water is good. Follow the patterns is better.

This interaction unlocks life's distribution and abundance in those landscapes. That does not necessarily make it easier to find, as the last refuges for microbes in extreme environments can be at the micro- to nanoscale within the cracks in crystals. On the other hand, observations made in terrestrial analogs suggest that these interactions considerably expand the potential territory for modern life on Mars and could bring it closer to the surface than long theorized.

If Mars still harbors life today, which Cabrol thinks it does, to find it we must take the approach of Mars as a biosphere. As such, its microbial habitat distribution and abundance are tightly connected not only to where life could theoretically survive today but also where it was able to disperse and adapt over the entire history of the planet, and the keys to that dispersion lie in early geological times. Before the Noachian/Hesperian transition, 3.7-3.5 billion years ago, rivers, oceans, wind, dust storms would have taken it everywhere across the planet. "Importantly, dispersal mechanisms still exist today, and they connect the deep interior to the subsurface," Cabrol says.

But a biosphere cannot run without an engine. Cabrol proposes that the engine to sustain modern life on Mars still exists, that it is over 4 billion years old and migrated out of sight today, underground.

If this correct, these observations may modify our definition of what we call "Special Regions" to include the interaction of extreme environmental factors as a critical element, one that potentially expands their distribution in substantial ways and could have us rethink how to approach them. The issue, here, says Cabrol, is that we do not yet have the global environmental data at a scale and resolution that matters to understand modern microbial habitability on Mars. As human exploration gives us a deadline to retrieve pristine samples, Cabrol suggests options regarding the search for extant life, including the type of missions that could fulfill objectives critical to astrobiology, human exploration, and planetary protection.

The work reported here was supported by the NASA Astrobiology Institute via Grant No. NNA15BB01A.

About the SETI Institute

Founded in 1984, the SETI Institute is a non-profit, multi-disciplinary research and education organization whose mission is to explore, understand, and explain the origin and nature of life in the universe and the evolution of intelligence. Our research encompasses the physical and biological sciences and leverages expertise in data analytics, machine learning and advanced signal detection technologies. The SETI Institute is a distinguished research partner for industry, academia and government agencies, including NASA and NSF.