Final judging for the 2017 Collegiate Inventors Competition is scheduled for Nov. 3 at the U.S. Patent and Trademark Office. 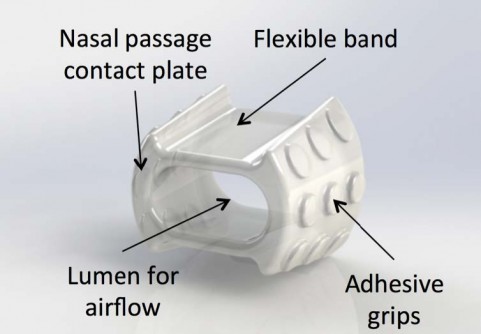 This illustration depicts the design of the AssistENT piece that is inserted to dilate an obstructed nostril. 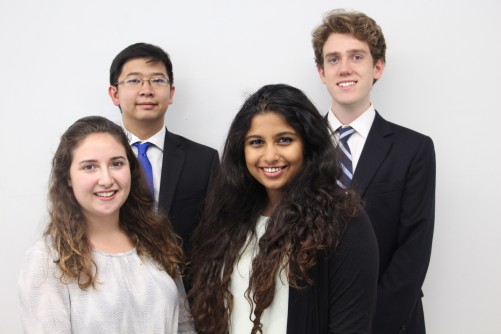 Newswise — A Johns Hopkins student team that wants to help people breathe easier has scored a coveted finalist spot in the 2017 Collegiate Inventors Competition, organizers of the event have announced. The students devised a simple, discreet device to open obstructed nostrils, a common problem that can cause snoring and other sleep disruptions, as well as exercising difficulties.

The AssistENT team, formed by biomedical engineering majors during the 2016-17 school year, was selected as one of six undergraduate finalist teams that will compete for top honors and prizes worth up to $10,000 during the competition. The final judging is scheduled for Nov. 3 at the U.S. Patent and Trademark Office in Alexandria, Virginia.

The annual contest, a program of the National Inventors Hall of Fame, was introduced in 1990. Since then, with the help of sponsors, the event has awarded more than $1 million to innovative undergrads and graduate student teams.

Organizers of the event said this year marked the 14th time a Johns Hopkins student team has been a finalist in the competition.

“We’re all pretty excited about this,” team leader Clayton Andrews said. “This is an affirmation that what we’re doing is something that people will appreciate. This device makes sense, and we hope it will eventually make a difference in people’s lives.”

The need for a better way to open restricted nasal passages came to the team’s attention last year from Patrick J. Byrne, a Johns Hopkins professor of otolaryngology/head and neck surgery and director of the Division of Facial Plastic and Reconstructive Surgery.

The biomedical engineering students learned that one out of eight people has trouble breathing through the nose due to an obstruction in the nostrils. Some people opt for reconstructive surgery to open their nasal passages, but about a fifth of these patients say this only worsened the condition. Other people used over-the-counter adhesive strips and other dilation products to open their airways. But the students say many users complain that these options are ineffective, uncomfortable and too unsightly to wear in public.

Andrews and his student team, who were in a biomedical design course, sought to devise a better tool to address the restricted breathing problem. Advised by Byrne and course instructor Robert H. Allen, the students designed and began testing a nasal dilator that could open obstructed nostrils while resting unseen within the nose. They also fabricated a tool to safely and easily insert and remove the dilator.

Andrews said he had a personal reason for pursuing this particular project. “I have experienced nasal obstruction myself,” he said. “I learned that not everyone wants to undergo surgery to fix it. There’s no guarantee of success.”

Andrews graduated in the spring, but obtained a Johns Hopkins fellowship that has allowed him to remain in Baltimore and continue working on the AssistENT project. The “ENT” in the project’s title is a reference to the abbreviation for ear, nose and throat doctors. The team is continuing to refine its product and hopes to begin testing in nasal obstruction patients in the near future.

The AssistENT project was developed in course offered through the Center for Bioengineering Innovation and Design within the Department of Biomedical Engineering. The department is part of both the university’s Whiting School of Engineering and its School of Medicine.