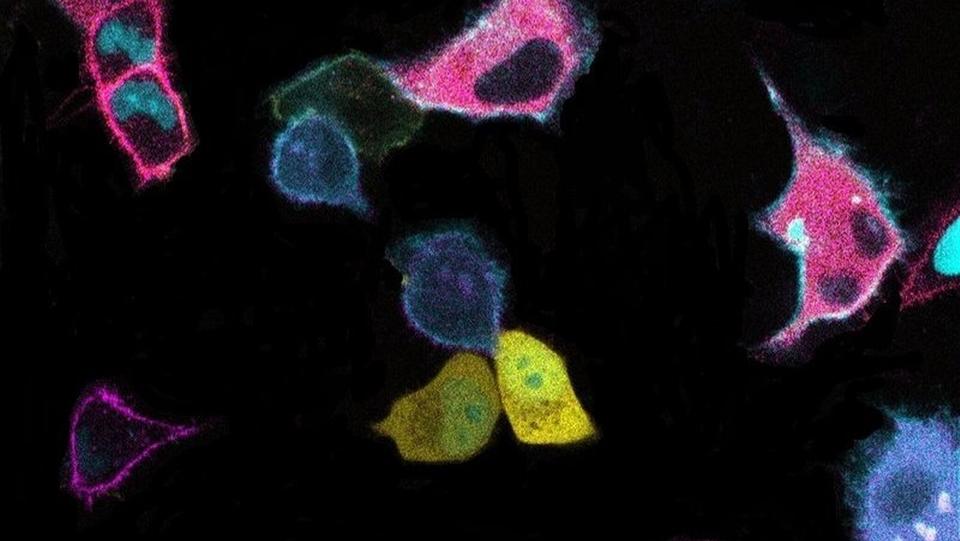 The image shows cells labeled by “biosensor barcodes” of different colors and spatial patterns within those cells. A Johns Hopkins Medicine study demonstrates how barcoding tools can be used to concurrently identify and track communication signals among cells, including those driving cancer formation.

Newswise — Ever since the first barcode appeared on a pack of chewing gum in 1974, the now-ubiquitous system has enabled manufacturers, retailers and consumers to quickly and effectively identify, characterize, locate and track products and materials. In a paper first posted online Nov. 26, 2021, in the journal Cell, researchers at Johns Hopkins Medicine and The Johns Hopkins University demonstrate how they can do the same thing at the molecular level, studying the ways cancer cells “talk” with one another using a different kind of barcode system — one made up of combinations of patterns and colors, with each set tied to a specific biochemical activity in the communication network.

“When cancer cells communicate, numerous proteins constantly change how they interact with one another,” says senior study author Chuan-Hsiang (Bear) Huang, M.D., Ph.D., assistant professor of pathology at the Johns Hopkins University School of Medicine. “Studying this signaling in depth and in real time has traditionally been difficult, so we needed a method that could simultaneously image, track and analyze everything happening in the network, and therefore, reveal the true relationships among these activities.”

Genetically encoded fluorescent biosensors were previously used to study cellular protein functions, including signaling activities in cancer cells, says Huang. The biosensors are protein fragments tagged with fluorophores — fluorescent molecules that glow by absorbing light energy of a specific wavelength and then emitting light at a longer wavelength — and each color is linked to a specific activity in the cell. Using a fluorescent microscope to image the type, location and intensity of the colors exhibited by these sensors, researchers can accurately and precisely document proteins in action in different cell regions.

“For example, changes in the intensity of specific colors, their locations within cells and the ratio of one color to another shed light on the activity levels of the proteins being studied and how they interact with one another in real time,” says Huang.

However, Huang says the usefulness of fluorescent biosensors was limited when researchers needed to track a complex system like a cancer cell communications network. This, he explains, was because different biosensors often had very similar colors and could not be distinguished from one another when imaged together.

“In the past, if you wanted to look at dozens of biosensors that tracked the activities of different proteins in a signaling network, each biosensor had to be imaged in separate experiments that lasted hours,” says study lead author Jr-Ming Yang, Ph.D., a research associate at the Johns Hopkins University School of Medicine. “Moreover, to understand the communication network’s properties, those experiments had to be repeated. Besides the time investment, separate imaging runs increased the likelihood of variations popping up, making it difficult to ascertain that the changes in activity were from real effects.”

Huang and his colleagues overcame these problems by combining fluorescent proteins of different colors and localization patterns to create “biosensor barcodes,” tools that can concurrently identify and track a larger number of biosensors for various proteins, including those driving cancer formation.

“To track multiple signaling protein activities in parallel, we pair our different biosensors with specific barcodes in individual cells, and then mix and image them using time-lapse microscopy,” says Huang. “Since each cell has a different barcode, we also can use this method to identify different populations of cells in the mix and investigate how they communicate with one another.”

“The AI analysis enables us to read the barcodes in seconds rather than hours, a crucial step toward seeing how the activity of different proteins are synchronized over time,” says Chi.

“Using biosensor barcodes, we hope to get more insights and more comprehensive views than ever before of how oncogenes [genes that initiate the development of cancer cells] affect communication among cancer cells, and with other networks such as those used by the immune system,” says Huang. “These findings could help direct new interventions and treatments.”

Along with Huang, Yang and Chi, the members of the study team from Johns Hopkins Medicine and The Johns Hopkins University are Jessica Liang, Saki Takayanagi and Pablo Iglesias.

The study authors do not have financial or conflict of interest disclosures.