Newswise — Ithaca, NY— Lights Out Texas is a new two-year study now underway in Houston, Dallas, and Fort Worth. Along with local partners, researchers from the Cornell Lab of Ornithology and Colorado State University plan to test the best times to turn off lights at night in order to prevent harm to the hundreds of millions of birds migrating over these cities.

A billion birds fly north over Texas during spring migration.

The vast majority of migrating birds fly at night. They are attracted to and disoriented by bright light emanating from big cities such as Houston, Dallas, and Fort Worth. The birds gather in large numbers, fly lower, and circle aimlessly, dramatically increasing their risks of fatal collisions with buildings either at night or by attracting them to areas where they may crash into buildings during the day.

As many as 1 billion birds die from building collisions every year.

"We have a real opportunity to make an impact here—to help to protect one of the planet’s greatest mass animal movements, just by turning off unnecessary lights," said the Cornell Lab’s Julia Wang who is heading up the Lights Out Texas study. "This means turning off or reducing lighting during a window of time when at least 50% of the overall spring migration traffic is moving through the Houston, Dallas, and Fort Worth areas."

That crucial migration window is April 19 through May 7.

Lights Out Texas organizers are calling on people in the Houston, Dallas, and Fort Worth areas to reduce or eliminate lighting in or around tall buildings, businesses, and private residences between 7:00 p.m. and 7:00 a.m. during the April 19 through May 7. This window of time is likely to have the most intense migration. This period was chosen after scientists analyzed migration frequency and intensity using more than 20 years of data from the U.S. weather surveillance radar network.

Forecasts can predict nights of intense migration up to three days in advance.

"In addition to BirdCast migration forecasts, we’re working on a special online migration alert system for Houston, Dallas, and Fort Worth," said Andrew Farnsworth, who heads BirdCast, the Cornell Lab’s migration monitoring program. "The unique thing that we’re trying to do in Texas is the integration of the science so we can predict nights of heavy migration, when more birds are at greater risks of collision with buildings. On those night we’re asking that everyone turn off unnecessary lights.”

Lights Out Texas took shape after Cornell Lab researchers identified the top U.S. cities that exposed nocturnal migrating birds to the highest levels of light pollution. Houston and Dallas ranked second and third respectively during both spring and fall migration.

"While we hope that lights can be turned off for much of the migration season, we also understand that other factors come into play, including public safety," said collaborator Kyle Horton, lead author of the light pollution study and now an assistant professor at Colorado State University. "For this reason, we target the specific nights that the majority of migrants are in flight–an approach only possible because of recent advances in our ability to forecast migration."

"The migration forecast maps on BirdCast back up our own Action Alerts with science," said Houston Audubon conservation director Richard Gibbons. "These visuals really help people connect the risks to birds with conservation action they can take.”

Editors: Download images and social media embed codes. The use of this material is protected by copyright. Use is permitted only within stories about the content of this release. Redistribution or any other use is prohibited without express written permission of the Cornell Lab of Ornithology or the copyright owner. 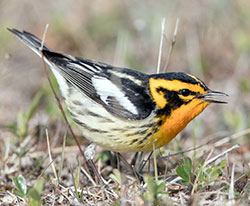