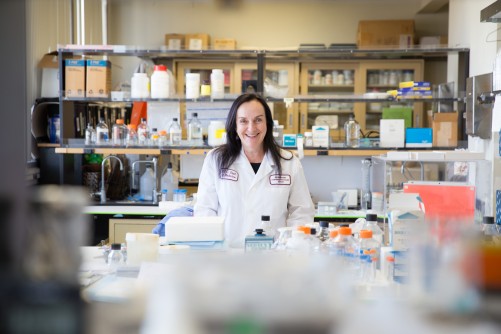 Dr. Zea Borok has been awarded a seven-year, $6.9 million grant from the NIH’s National Heart, Lung, and Blood Institute to fund her pulmonary medicine research program at the Keck School of Medicine of the University of Southern California.

Newswise — LOS ANGELES – The Keck School of Medicine of the University of Southern California (USC) is one of four institutions in California to receive a multimillion dollar R35 grant from the National Institutes of Health’s (NIH) National Heart, Lung, and Blood Institute (NHLBI) in 2017. The seven-year, $6.9 million grant will support research on lung cell regeneration that could lead to new therapies for common lung diseases such as pulmonary fibrosis or chronic obstructive pulmonary disease.

Grant recipient Zea Borok, MD, professor of medicine, chief of the division of pulmonary, critical care and sleep medicine and director of the Hastings Center for Pulmonary Research at the Keck School, is exploring how cells in the alveoli, the tiny air sacs in the lungs where gas exchange takes place, regenerate.

“Without alveolar cells, you can’t breathe properly, or you can go into respiratory failure and die. That’s the endpoint of a lot of common lung diseases,” Borok said.

Borok’s research program is using different methods, including stem cell research, to learn more about how these cells are maintained and repair themselves.

“Understanding the mechanisms that promote — or prevent — alveolar epithelial cell regeneration will provide valuable insight into how the lungs repair themselves after injury and could open the door to new therapies for lung diseases like pulmonary fibrosis,” Borok said.

Pulmonary fibrosis, which primarily affects people 50 years of age and older, is a progressive disease that causes scarring in the lungs. Symptoms include shortness of breath or a dry cough. Its cause is unknown.

“The median survival rate for pulmonary fibrosis is three to five years, and current treatments are limited. New drugs have been developed that will stabilize, but not cure, the condition," Borok said. "Lung transplantation is the only other option. There is a tremendous need for new therapies.”

The NHLBI’s R35 grant program, which was launched in 2016, offers stable multiyear funding for emerging and outstanding researchers. By funding an investigator’s overall research program rather than a specific project, the grant is designed to provide more opportunities for pursuing novel research.

“This generous grant from the NIH is a recognition of Dr. Borok’s exceptional contributions to alveolar epithelial cell research, and it will enable her to chart new territory in this field of study,” Rohit Varma, MD, MPH, dean of the Keck School, said. “We are looking forward to seeing where the science takes her.”

ABOUT THE KECK SCHOOL OF MEDICINE OF USC Founded in 1885, the Keck School of Medicine of USC is among the nation’s leaders in innovative patient care, scientific discovery, education, and community service. It is part of Keck Medicine of USC, the University of Southern California's medical enterprise, one of only two university-owned academic medical centers in the Los Angeles area. This includes the Keck Medical Center of USC, composed of the Keck Hospital of USC and the USC Norris Cancer Hospital. The two world-class, USC-owned hospitals are staffed by more than 500 physicians who are faculty at the Keck School. The school today has approximately 1,650 full-time faculty members and voluntary faculty of more than 2,400 physicians. These faculty direct the education of approximately 700 medical students and 1,000 students pursuing graduate and post-graduate degrees. The school trains more than 900 resident physicians in more than 50 specialty or subspecialty programs and is the largest educator of physicians practicing in Southern California. Together, the school's faculty and residents serve more than 1.5 million patients each year at Keck Hospital of USC and USC Norris Cancer Hospital, as well as USC-affiliated hospitals Children’s Hospital Los Angeles and Los Angeles County + USC Medical Center. Keck School faculty also conduct research and teach at several research centers and institutes, including the USC Norris Comprehensive Cancer Center, the Zilkha Neurogenetic Institute, the Eli and Edythe Broad Center for Stem Cell Research and Regenerative Medicine at USC, the USC Cardiovascular Thoracic Institute, the USC Roski Eye Institute and the USC Institute of Urology.

An abstract of the grant, R35HL135747, is available on the NIH RePORTER website.