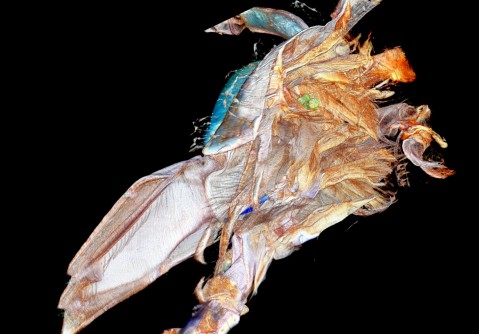 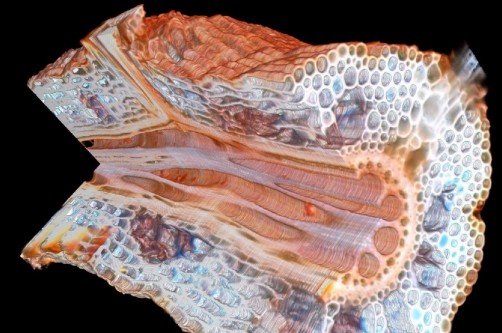 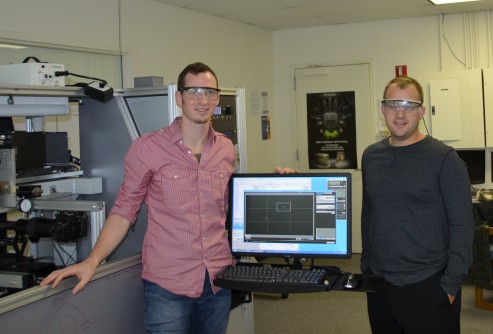 Newswise — A new technology invented to automate the laborious process of preparing plant roots for phenotyping has morphed into a powerful tool for exploring the three-dimensional structure of small objects. Now, two former Penn State students have formed a start-up company targeting agribusiness and horticultural research.

The standard method of preparing root samples for analysis requires cutting thin slices of root by hand, a process that yields four to five slices per hour. Jonathan Lynch, a professor of plant nutrition at Penn State and head of the Roots Lab, had a backlog of 20,000 samples he was studying to improve drought tolerance and nutritional uptake in low fertility soil. Benjamin Hall was an undergraduate student in energy engineering working part-time in the laser lab of the Applied Research Laboratory at Penn State. Lynch applied for a small grant from the National Science Foundation’s Research Experience for Undergraduates (REU) program, which funded Hall to work on a project to apply lasers for slicing his root samples.

Using a nanosecond-pulse laser, Hall developed a method to slice 11 identically spaced root samples per second. “Then I had to take the samples all the way across campus to the root lab to have them analyzed,” Hall says. “It was easier to buy a good camera lens and take the photos myself and send the files to the lab.”

Hall struggled with finding the proper backlighting to make clear images but eventually discovered that the laser itself provided sufficient light to light up the image while it was being cut. By placing the root on a moveable platform beneath the laser, he could incrementally vaporize sections of the root, leaving a series of clear surface images, which could be combined with software to make a 3D rendering of the interior and exterior of the sample.

“This is a tomography technique, and there are others out there,” says Hall. “But x-ray tomography basically works by mapping the density of a substance, which is great unless the specimen has different materials of similar density. That can make it hard to differentiate structures, so it can be difficult to quantify measurements. Magnetic resonance imaging (MRI) we’re not even competing with. Those machines are so big and complex, and so expensive to operate compared to our system.”

The laser tomography method is novel in that it provides high contrast, full color images without the use of contrast enhancing agents. This allows researchers to see nuance compositional differences in their samples they would not be able to see otherwise. Additional benefits of the laser tomography method are its speed, on the order of minutes, and that in most cases no preparation is required for the small biological specimens studied.

Penn State has applied for a patent, and Hall and his business partner Brian Reinhardt, a former Penn State graduate student, have founded a company, Lasers for Innovative Solutions (L4IS), aimed at providing large agriculture companies with high throughput phenotyping of their new products, something they don’t currently have. Reinhardt has a physics and computer science background and an interest in computer gaming. (His fast computer and high-end video card became early assets of L4IS.) At a recent talk at Penn State’s Millennium Science Complex, Hall wowed the audience with images of the complex internal structures of plants and insects. But beyond the wow factor, it was the possibility of gathering scientific data in a colorful, clear, and detailed three-dimensional representation that had the audience talking. There were suggestions for new scientific uses for his technology, which Hall welcomed. “We don’t even know what all we can do with this yet.

“Technology is moving so fast. There are techniques we can combine with ours to get chemical information out of the samples. We have to start approaching some of these scientific problems differently. We can do 3D analysis. Now what else can we do?” Included on the patent are Hall and his Penn State advisers, Jonathan Lynch and Ted Reutzel. Hall is currently working with Lynch on a paper describing their method. Ben Franklin Technology Partners of Central and Northern Pennsylvania provided funding and business assistance to start the company, and the Ben Franklin TechCelerator @ State College provided valuable entrepreneurial training. Visit the L4IS website at http://l4is.com. To view videos of their laser tomography, go to http://www.youtube.com/user/L4ISLLC.