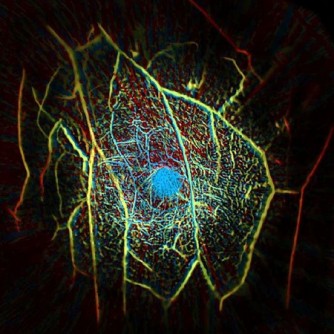 Image of the internal vascular structure of a human breast created with the PACT photoacoustic imaging technique.

Newswise — Up to 50% of women skip potentially life-saving mammograms often because the procedure can cause extreme discomfort and pain.1  Now researchers have developed a painless, light-based, non-radioactive, 15-second procedure that could revolutionize breast cancer screening and save lives.

Although early detection of breast cancer can significantly increase survival, the radioactive X-ray that requires painful squeezing of the breast to get a good picture is an event that women do not look forward to. Now Caltech researcher Lihong Wang, Ph.D., Bren Professor of Medical and Electrical Engineering, and his colleagues are using their expertise in imaging tissues with light and sound to address this problem. Their development of a revolutionary breast scanning system known as photoacoustic computed tomography (PACT) is reported in the June issue of Nature Communications.2

“The technique developed by Wang and his colleagues combines light and sound to peer noninvasively into tissues without the radioactivity of an X-ray,” explained Behrouz Shabestari, Ph.D., director of the Program in Optical Imaging at the National Institute of Biomedical Imaging and Bioengineering, which funded the study.  “PACT is also superior to MRI, which is expensive and sometimes requires the injection of contrast agents, commonly gadolinium. Gadolinium cannot be used in individuals with kidney disease and has recently been shown to accumulate in the bones and brain with unknown long-term effects.”

The PACT technique involves pulses of harmless laser light capable of penetrating deep enough into tissue to hit the biological target. However, that light is completely blurred as it bounces and travels back through the tissue. This is where the acoustic part comes in. Sound travels very cleanly through tissues. In photoacoustic imaging the target is hit with light, which causes vibrations that return as a detailed image of the target in the form of sound, similar to ultrasound images.

During the breast scan, the laser specifically targets and causes the vibrations in the oxygen-carrying hemoglobin in the blood vessels. An array of ultrasonic detectors, placed around the breast of the patient, collect the ultrasonic signals and the result is a detailed picture of the blood vessel network in the breast. Because tumors develop very dense and disorganized vascular networks, these “knots” of blood vessels are easily detected by PACT.

For this initial study, the researchers performed PACT breast scans on eight women. The scan of each breast takes only 15 seconds as the woman lies on a table, with the breast comfortably resting in a basket-like net that contains the ultrasonic sensors. PACT correctly detected eight of the nine breast tumors that were present in the eight women.

The next step is to conduct additional studies in a larger population, which is being planned by a company founded by Wang that has licensed the technology.

“We think of PACT as a dream machine, which has none of the discomfort of the unpopular mammogram and so could ultimately save countless lives through early screening and detection,” says Wang. “Because of the detailed images created by PACT, we are looking at other uses such as assessment of the blood vessel damage in diabetics. The severe vascular damage and death of leg and foot tissues in diabetics is a major health problem that could be significantly improved by early detection and treatment.”