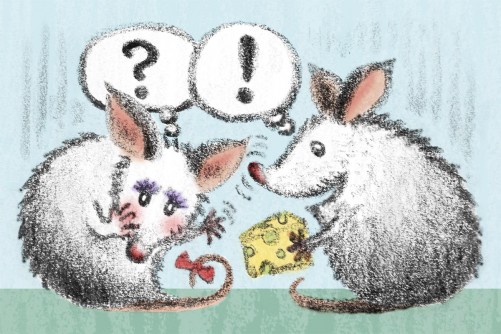 A specific kind of neuron found only in male mice and that detects a pheromone in female urine has been identified by researchers at Washington University School of Medicine in St. Louis. But the sex difference is not hard-wired. By manipulating the mice’s living conditions and exposing male mice to female scents for long periods of time, the scientists showed that males lost these neurons and, with them, their interest in courting females.

Newswise — Few things are as interesting to a male mouse as the scent of a female. Pheromones released by females draw the attention of male mice and trigger courtship and mating behavior.

Now, researchers at Washington University School of Medicine in St. Louis have found a specific kind of neuron only in male mice that detects a pheromone in female urine. But the sex difference is not hard-wired. By manipulating the mice’s living conditions and exposing male mice to female scents for long periods of time, the scientists showed that males lost these neurons and their interest in courting females.

The study, published Aug. 17 in Neuron, describes how neurons in the nose adapt to experience, and helps explain differences among individuals and between the sexes.

“Obviously people have different brains. We think differently, we act differently,” said Timothy E. Holy, PhD, an associate professor of neuroscience and the study’s senior author. “There’s been a lot of interest over the years in trying to understand what it is that makes one brain different than another brain. In this case, the differences between males and females was due not to innate factors – as you might expect for a pheromone-sensing system – but instead to different sensory experiences.”

Holy and former graduate student Pei Sabrina Xu, PhD, screened hundreds of thousands of neurons in mice’s vomeronasal organs, a structure in the nose that detects pheromones as well as other chemical signals. The vast majority of the neurons were the same between the sexes, but one subset was present in the males but absent from the females. That subset specifically detects epitestosterone sulfate, a possible byproduct of sex hormones.

“To get to the bottom of the nature vs. nurture question, I exposed males to females and females to males, so that they were all in the same sensory environment,” said Xu, who is now a postdoctoral researcher at the University of California, San Francisco. “We found that under these conditions, the distribution of neurons in males and females actually looks the same.”

The males that were exposed to female urine for two months lost the neurons that responded to the female pheromone. With the loss of such neurons, the males also lost their interest in sniffing around female urine. For female mice – which had no such neurons to begin with – exposure to male urine had no effect on the types of neurons in their noses.

When the sexes were segregated again, the males re-acquired the pheromone-sensitive neurons.

Male and female mice differ not only in living arrangements but in exposure to sex hormones such as testosterone and estrogen that their own bodies produce. To find out whether sex hormones affect the number of neurons devoted to detecting female pheromones, the researchers removed the testes from male mice and the ovaries from females.

“The neuronal types were not changed in ovariectomized females nor castrated males,” Xu said. “That tells us it’s not a hormonal effect but dominated by sensory experience.”

In most mouse species, males maintain separate territories from females, so they encounter female urine only occasionally, and then they respond with great interest. In nature, they would likely never be so chronically exposed to female pheromones that they would lose the ability to detect them. Females, on the other hand, could never escape their own scents.

The result is a neurological sex difference based on environmental, rather than genetic or hormonal, differences between the sexes.

“We looked at sex differences, but the tools we used – large-scale imaging of neuronal activity at cellular resolution – could be used to study any kind of differences between individuals, not just in the nose but elsewhere in the brain,” Xu said. “We showed that it’s possible to detect the very tiny fraction of neurons that are functioning differently between individuals, and then look for the factors that drive that difference.”

The process identified in this study – in which overexposure to a molecule results in loss of the neurons that detect that molecule – could be part of a neurological mechanism to balance the ability to detect common and rare sensory cues, according to Holy.

“In the lab, this is an all-or-none process, but that’s probably because it’s a very controlled sensory environment with limited cues,” Holy said. “In the wild, the animals would be exposed to a wide variety of scents, and this process probably modulates the proportion of neurons responding to each scent, rather than making some neurons disappear entirely. I would guess that this mechanism helps ensure balance in what the animal can detect, so that, if it’s getting a lot of information about a particular class of molecule, it turns down that channel of information and that leaves more capacity to pick up other cues that it’s not detecting as well right now.”