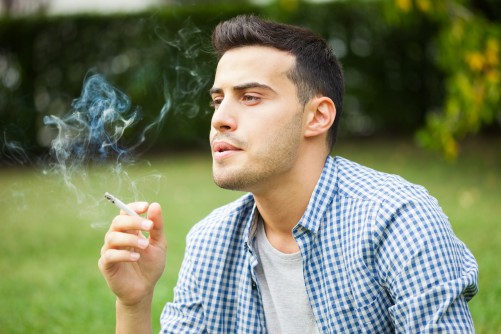 Newswise — ATS 2017, WASHINGTON, DC ─ In a new study, CT-measured vascular pruning – the diminution of distal pulmonary blood vessels (vessels on the outer edges of the lungs) – was associated with increased risk of death in smokers without chronic obstructive pulmonary disease (COPD).  The study was presented at the 2017 American Thoracic Society International Conference.

“Our finding suggests that vascular pruning may be an important marker for susceptibility to injury from tobacco smoke and may provide prognostic information in smokers with mild or no lung function impairment,” said lead author Carolyn E. Come, MD, of Brigham and Women’s Hospital, Boston, Massachusetts.  Interestingly, a similar signal was not seen in smokers with COPD.  “It is possible that vascular injury precedes lung tissue destruction, but that as disease evolves, the two processes progress in parallel.  As a result, the effect of vascular pruning may be overshadowed in models that look at multiple variables to predict mortality.  It is also possible that vascular pruning’s association with mortality is nonlinear.”

Dr. Come and colleagues used CT scanning to measure the vascular structure (morphology) of 6,435 patients who had participated in the COPDGene study.  These patients had Global Initiative for Chronic Obstructive Lung Disease (GOLD) stage 0-4 airflow obstruction, and available mortality data.   Researchers looked at a number of variables to examine the association between vascular pruning and mortality.  Patients were divided into four groups (quartiles), based on their amount of vascular pruning. They then divided the entire cohort into those with and those without COPD.

On the whole, 3.8 percent of patients without COPD and 18.8 percent of those with COPD died over a median follow up of 5.6 years.  In both the COPD and non-COPD groups, the scientists found that mortality rates increased with greater vascular pruning.  In the non-COPD group, however, after adjusting for numerous variables, patients in the two quartiles with the most pruning  had significantly higher mortality than those in the lowest quartile for pruning.  In COPD patients, vascular pruning was not significantly associated with mortality on adjusted analyses.

“Our finding of macroscopic vascular changes in smokers is consistent with previous studies that demonstrated evidence of microscopic vascular remodeling in pulmonary arteries of smokers without airflow obstruction,” said Dr. Come. She added:  “Our work extends the findings of these studies, again demonstrating changes in vascular morphology in smokers with mild or no lung function impairment and showing the clinical importance of these changes.”

Rationale: Pulmonary hypertension is an independent predictor of mortality in patients with chronic obstructive pulmonary disease (COPD). Additionally, histologic specimens have demonstrated evidence of pulmonary vascular disease even in smokers with normal lung function. In a small cohort of smokers, we showed that computed tomographic (CT) measures of distal vascular pruning are associated with BODE, a multidimensional index (including body mass index (BMI), forced expiratory volume in one second (FEV1), dyspnea, and six minute walk distance (6MWD)) that predicts mortality in COPD.  Based on this data, we hypothesized that measures of intraparenchymal vascular morphology could predict mortality in smokers with and without COPD.

Methods: We measured CT vascular morphology in 6435 subjects from the COPDGene cohort who had Global Initiative for Chronic Obstructive Lung Disease (GOLD) stage 0-4 airflow obstruction and available mortality data. Multivariable Cox regression models were used to evaluate the association between vascular pruning (expressed as the ratio of aggregate vessel volume for vessels less than 5mm2 (BV5) to total blood vessel volume (TBV), with smaller ratios indicating greater pruning), divided in quartiles, and mortality. Analysis was stratified by COPD status, where COPD refers to those with GOLD stage 2-4 airflow obstruction.

Measurements and Main Results: 3.8% (142/3732) of non-COPD subjects and 18.8% (507/2703) of COPD subjects died over a median follow-up of 5.6 years (interquartile range 4.9-6.2). For both groups, mortality rates increased significantly from the least to most pruned quartile. In non-COPD subjects, after adjustment for relevant covariates (age, sex, race, pack-years of smoking, smoking status, BMI, FEV1, 6MWD, dyspnea, percent emphysema, prior acute exacerbation, and coronary artery calcium), the two quartiles with the most pruning were significantly associated with mortality when compared with the least pruned quartile (HR 2.2, 95% CI, 1.2-3.9, P=0.007 and HR 1.9, 95% CI, 1.1-3.1, P=0.02, respectively). In COPD subjects, however, vascular pruning was not significantly associated with mortality.

Conclusions: In multivariable analyses, vascular pruning was associated with an increased risk of death in smokers without COPD; however no association was seen in subjects with COPD. This finding suggests vascular pruning may be an important marker for susceptibility to injury from tobacco smoke and may provide prognostic information in smokers with mild or no lung function impairment.