The surprising link between testosterone and men’s oral health 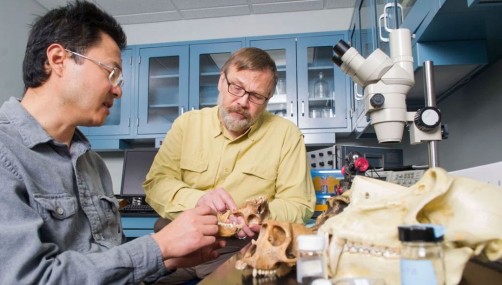 Dr. Qian Wang and Dr. Paul Dechow with some of the models used in their studies of primate and human craniofacial evolution

Newswise — More than 20 species of macaques, the most widely distributed nonhuman primates in the world, socialize in lively troops and make frequent appearances on National Geographic documentaries. But, what can we learn from one of our closest primate relatives about our own oral health?

Quite a bit, according to findings from a retrospective study done by Texas A&M University Baylor College of Dentistry researchers. Their work, which was recently published in the American Journal of Physical Anthropology, indicated that lack of testosterone left these monkeys with periodontal disease.

Qian Wang, Ph.D., associate professor in biomedical sciences, and Paul Dechow, Ph.D., Regents professor and biomedical sciences chair, analyzed the skeletonized remains of five castrated male rhesus macaques, all of which had died of natural causes. The mandibles, or jawbones, of four of them remained intact, offering the opportunity for comparison with remains of non-castrated males of approximately the same age. The differences were telling, and obvious; many of these traits can be seen with the naked eye.

The monkeys were all residents of Cayo Santiago, an island off the coast of Puerto Rico and home to the Caribbean Primate Research Center. Since the late 1930s, scientists have studied at least nine generations of these free-ranging monkey colonies.

“There’s a great deal to learn from these macaques,” Dechow said, “because this is one of the few places where we have a wild colony where the genetics are known, where there are blood samples and where we know things about the DNA.”

All of the castrated males showed signs of periodontitis and other oral problems that were much more evident and severe than in intact males of the same age. In particular, the researchers—who included veterinarian Matthew Kessler, former director of the center, and the University of Puerto Rico’s Terry Kensler, manager of the center’s Primate Skeletal Collections—noted that the bone that supports teeth had dramatically receded on the two 26-year old geriatric castrated males.

This pattern with the rhesus macaque has relevance for oral health in adult males. Although castration may seem a bit extreme, it’s more common than one may think, given that one in seven men will be diagnosed with prostate cancer in his lifetime, according to the American Cancer Society. Other causes include traumatic accidents, sexual reassignment surgery, and chemical or surgical castration for sex offenders.

This study is unique because while the link between estrogen, oral health and the temporomandibular joint is well known, the correlation between male sex hormones and oral health is not as widely publicized.

“We do know that many craniofacial tissues are sensitive to sex hormones,” Dechow said. “It’s just that it was usually more thought of on the estrogen side.” Although of course these relationships require further study, “they do raise the possibility that these may be important factors in the health of the craniofacial tissues, especially in aging.”

Even less extreme forms of testosterone loss may have an impact.

“This way, the dentist may have a better picture of the overall well-being of the patient,” said Wang, lead author on the study. “Low sex hormones are a natural phase of aging, and oral health could be a collateral victim, which is why oral hygiene and routine checkups are important throughout life.”