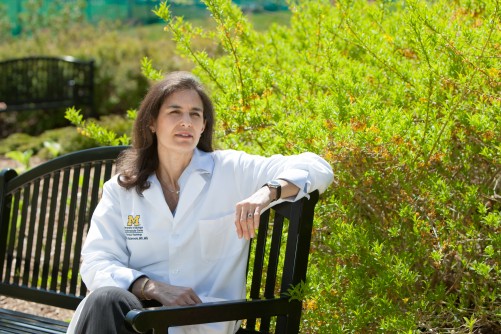 The guidelines, called Lung-RADS, were produced by the American College of Radiology and are modeled after a similar set of guidelines for mammography screening for breast cancer.

“Lung-RADS was designed to reduce the percentage of positive lung screenings and thereby fewer false-positives, without missing clinically significant cancers. And in fact our analysis found it did,” says senior study author Ella Kazerooni, M.D., M.S., director of cardiothoracic radiology at the University of Michigan Health System.

“Fewer positive screenings means less follow-up testing for patients, which should further improve on the cost-effectiveness of lung cancer screening that was already demonstrated with NLST,” she adds.

Kazerooni led the American College of Radiology effort to create Lung-RADS, which was published in May 2014. It was developed to provide structured reporting, management and audit tools for practices across the country to follow and benchmark their performance against.

In the current study, the researchers applied the Lung-RADS criteria to the 48,671 lung screenings done as part of the National Lung Screening Trial, a large-scale clinical trial funded by the National Cancer Institute. That study found that CT screening demonstrated a 20 percent reduction in lung cancer deaths among heavy smokers at high risk of lung cancer. Results appear in Annals of Internal Medicine.

Here, the researchers categorized the screenings according to Lung-RADS and found that 1 in 10 screenings would have been called positive, compared to 1 in 4 under the NLST. The false-positive rate was also lower under Lung-RADS, at 13 percent, compared to NLST at 27 percent.

The cancers that Lung-RADS missed looked to be slow-growing or minimally invasive. Researchers suspect that they would likely be caught on a subsequent routine screening with limited effect on survival.

“The high false-positive rate in the NLST is a potential harm. By implementing Lung-RADS, we may find that screening can be potentially even more effective,” Kazerooni says.

“The vast majority of screen detected lung nodules are not cancer,” says Douglas Arenberg, M.D., associate professor of pulmonary and critical care medicine at the University of Michigan Medical School. “Decades of experience have already provided us with a safe and very effective means of managing these so as to minimize unnecessary invasive procedures and anxiety among individuals found to have these incidental nodules.

Arenberg adds, “LUNGRads takes advantage of this long history of managing incidental nodules and puts tools in the hands of providers for managing screen-detected abnormalities without having to refer everyone to a specialist. It also provides an added measure of safety for screened individuals knowing their follow up is guided by expert advice.”

On Thursday, the Centers for Medicare and Medicaid Services agreed that lung cancer screening with CT scans will be covered for people at high-risk of developing lung cancer. The screenings are also recommended by the U.S. Preventive Services Task Force, the government body that evaluates cancer screening tools, making them an essential covered benefit under the Affordable Care Act as well.

Lung screening is recommended for people age 55-80 who have smoked at least 30 pack years and are either current smokers or quit within the last 15 years.