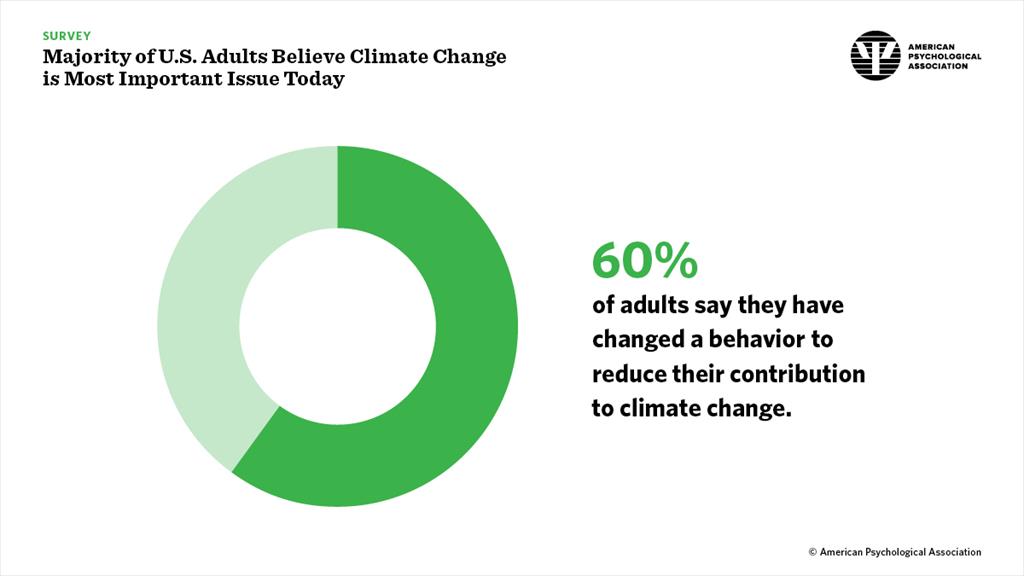 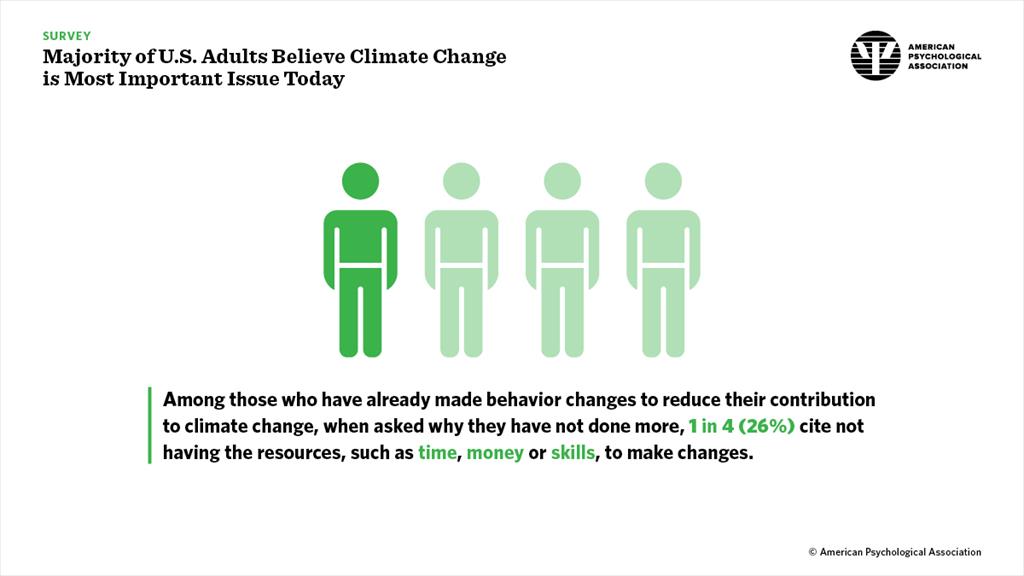 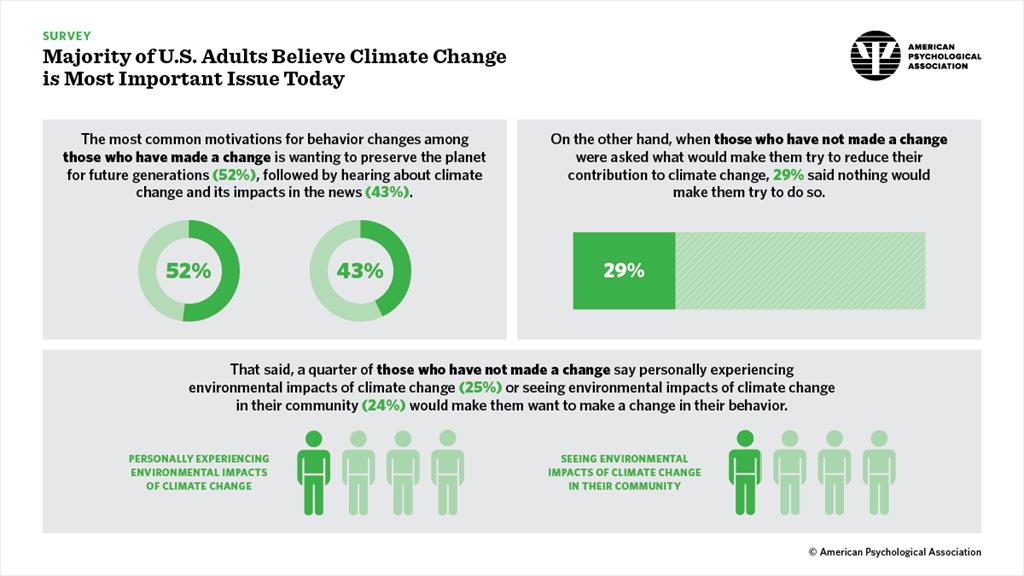 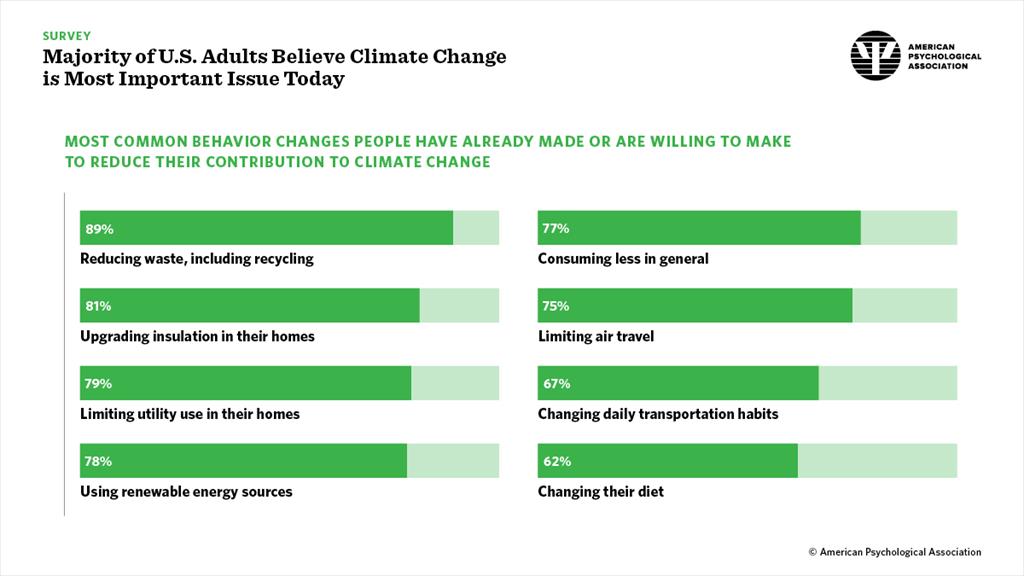 Newswise — WASHINGTON - As the effects of climate change become more evident, more than half of U.S. adults (56%) say climate change is the most important issue facing society today, yet 4 in 10 have not made any changes in their behavior to reduce their contribution to climate change, according to a new poll by the American Psychological Association.

While 7 in 10 say they wish there were more they could do to combat climate change, 51% of U.S. adults say they don’t know where to start. And as the election race heats up, 62% say they are willing to vote for a candidate because of his or her position on climate change.

The survey was conducted online from Dec. 12-16, 2019, by The Harris Poll on behalf of the American Psychological Association.

People are taking some steps to combat climate change, with 6 in 10 saying they have changed a behavior to reduce their contribution to climate change. Nearly three-quarters (72%) say they are very or somewhat motivated to make changes.

“The health, economic, political and environmental implications of climate change affect all of us. The tolls on our mental health are far reaching,” said Arthur C. Evans Jr., PhD, APA’s chief executive officer. “As climate change is created largely by human behavior, psychologists are continuing to study ways in which we can encourage people to make behavioral changes – both large and small – so that collectively we can help our planet.”

The most common behavior changes people have already made or are willing to make include: reducing waste, including recycling (89%); upgrading insulation in their homes (81%); limiting utility use in their homes (79%); using renewable energy sources, such as solar panels or purchasing electricity from a renewable energy supplier (78%); consuming less in general (77%); or limiting air travel (75%).

Adults are less likely to say they have changed or are willing to change daily transportation habits (e.g., carpool, drive an electric or hybrid vehicle, use public transportation, walk or bike) (67%) or their diet (e.g., eat less red meat or switch to a vegetarian or vegan diet) (62%).

The most common motivations for behavior changes among those who have taken action to reduce their contribution to climate change are wanting to preserve the planet for future generations (52%), followed by hearing about climate change and its impacts in the news (43%).

Methodology This survey was conducted online within the United States by The Harris Poll on behalf of APA from Dec.12 – 16, 2019, among 2,017 U.S. adults ages 18 and older. Figures for age, sex, race/ethnicity, education, region, employment, marital status, household size and household income were weighted where necessary to bring them into line with their actual proportions in the population. Propensity score weighting was used to adjust for respondents’ propensity to be online. This online survey is not based on a probability sample and therefore no estimate of theoretical sampling error can be calculated.

The American Psychological Association, in Washington, D.C., is the largest scientific and professional organization representing psychology in the United States. APA’s membership includes nearly 121,000 researchers, educators, clinicians, consultants and students. Through its divisions in 54 subfields of psychology and affiliations with 60 state, territorial and Canadian provincial associations, APA works to advance the creation, communication and application of psychological knowledge to benefit society and improve people’s lives.