The speed of information in a spin network 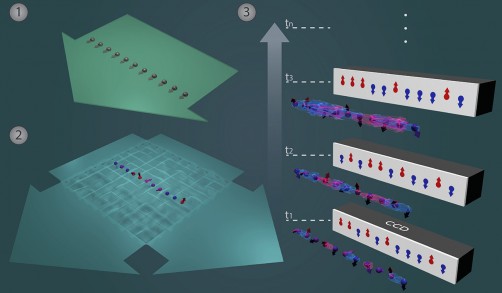 (1) Using a laser, the ion spin chain is optically pumped to a spin state that is uncorrelated with respect to the spin-spin interactions. (2) The system is suddenly perturbed by lasers, turning on global spin-spin interaction. (3) After the spin system evolves for various lengths of time (t1…tn), the spin state of each ion is captured with a CCD camera. The researchers can directly observe the spin-spin correlations propagating across the ion chain.

Artistic impression of the formation of quantum correlations in time.

Newswise — In quantum mechanics, interactions between particles can give rise to entanglement, which is a strange type of connection that could never be described by a non-quantum, classical theory. These connections, called quantum correlations, are present in entangled systems even if the objects are not physically linked (with wires, for example). Entanglement is at the heart of what distinguishes purely quantum systems from classical ones; it is why they are potentially useful, but it sometimes makes them very difficult to understand.

Physicists are pretty adept at controlling quantum systems and even making certain entangled states. Now JQI researchers*, led by theorist Alexey Gorshkov and experimentalist Christopher Monroe, are putting these skills to work to explore the dynamics of correlated quantum systems. What does it mean for objects to interact locally versus globally? How do local and global interactions translate into larger, increasingly connected networks? How fast can certain entanglement patterns form? These are the kinds of questions that the Monroe and Gorshkov teams are asking. Their recent results investigating how information flows through a quantum many-body system are published this week in the journal Nature (10.1038/nature13450), and in a second paper to appear in Physical Review Letters.

Researchers can engineer a rich selection of interactions in ultracold atom experiments, allowing them to explore the behavior of complex and massively intertwined quantum systems. In the experimental work from Monroe’s group, physicists examined how quickly quantum connections formed in a crystal of eleven ytterbium ions confined in an electromagnetic trap. The researchers used laser beams to implement interactions between the ions. Under these conditions, the system is described by certain types of ‘spin’ models, which are a vital mathematical representation of numerous physical phenomena including magnetism. Here, each atomic ion has isolated internal energy levels that represent the various states of spin.

In the presence of carefully chosen laser beams the ion spins can influence their neighbors, both near and far. In fact, tuning the strength and form of this spin-spin interaction is a key feature of the design. In Monroe's lab, physicists can study different types of correlated states within a single pristine quantum environment.

To see dynamics the researchers initially prepared the ion spin system in an uncorrelated state. Next, they abruptly turned on a global spin-spin interaction. The system is effectively pushed off-balance by such a fast change and the spins react, evolving under the new conditions.The team took snapshots of the ion spins at different times and observed the speed at which quantum correlations grew.

The spin models themselves do not have an explicitly built-in limit on how fast such information can propagate. The ultimate limit, in both classical and quantum systems, is given by the speed of light. However, decades ago, physicists showed that a slower information speed limit emerges due to some types of spin-spin interactions, similar to sound propagation in mechanical systems. While the limits are better known in the case where spins predominantly influence their closest neighbors, calculating constraints on information propagation in the presence of more extended interactions remains challenging. Intuitively, the more an object interacts with other distant objects, the faster the correlations between distant regions of a network should form. Indeed, the experimental group observes that long-range interactions provide a comparative speed-up for sending information across the ion-spin crystal. In the paper appearing in Physical Review Letters, Gorshkov’s team improves existing theory to much more accurately predict the speed limits for correlation formation, in the presence of interactions ranging from nearest-neighbor to long-range.

Verifying and forming a complete understanding of quantum information propagation is certainly not the end of the story; this also has many profound implications for our understanding of quantum systems more generally. For example, the growth of entanglement, which is a form of information that must obey the bounds described above, is intimately related to the difficulty of modeling quantum systems on a computer. Dr. Michael Foss-Feig explains, “From a theorist’s perspective, the experiments are cool because if you want to do something with a quantum simulator that actually pushes beyond what calculations can tell you, doing dynamics with long-range interacting systems is expected to be a pretty good way to do that. In this case, entanglement can grow to a point that our methods for calculating things about a many-body system break down.”

Theorist Dr. Zhexuan Gong states that in the context of both works, “We are trying to put bounds on how fast correlation and entanglement can form in a generic many-body system. These bounds are very useful because with long-range interactions, our mathematical tools and state-of-the-art computers can hardly succeed at predicting the properties of the system. We would then need to either use these theoretical bounds or a laboratory quantum simulator to tell us what interesting properties a large and complicated network of spins possess. These bounds will also serve as a guideline on what interaction pattern one should achieve experimentally to greatly speed up information propagation and entanglement generation, both key for building a fast quantum computer or a fast quantum network.”

From the experimental side, Dr. Phil Richerme gives his perspective, “We are trying to build the world’s best experimental platform for evolving the Schrodinger equation [math that describes how properties of a quantum system change in time]. We have this ability to set up the system in a known state and turn the crank and let it evolve and then make measurements at the end. For system sizes not much larger than what we have here, doing this becomes impossible for a conventional computer.”

This news item was written by E. Edwards/JQI. 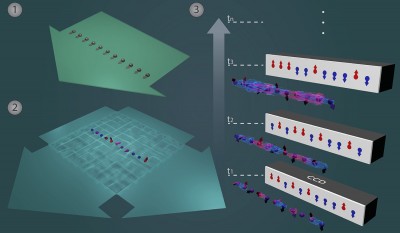 Caption: (1) Using a laser, the ion spin chain is optically pumped to a spin state that is uncorrelated with respect to the spin-spin interactions. (2) The system is suddenly perturbed by lasers, turning on global spin-spin interaction. (3) After the spin system evolves for various lengths of time (t1…tn), the spin state of each ion is captured with a CCD camera. The researchers can directly observe the spin-spin correlations propagating across the ion chain.

Caption: Artistic impression of the formation of quantum correlations in time.