Material From Shellfish Delivers a Boost to Bioassays and Medical Tests 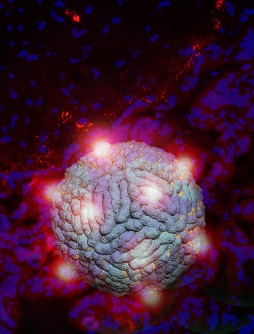 An artistic rendering of a virus particle (light blue, foreground) bound by brightly-colored reporter molecules in a common laboratory assay.

Microscopy images taken of Zika-infected primate placenta samples that were stained to detect Zika using a common laboratory assay, immunohistochemistry. The left image shows a sample treated with the EASE protocol, with red/orange colored signals of Zika infection clearly visible (white arrows). The right image shows a sample treated with a standard protocol, and Zika virus — though present — is not detected. Cell nuclei are stained in blue. The white dotted line indicates tissue barriers within the placenta. Scale bar is 100 micrometers.

Material from shellfish delivers a boost to bioassays and medical tests

Newswise — Scientists at the University of Washington have discovered a simple way to raise the accuracy of diagnostic tests for medicine and common assays for laboratory research. By adding polydopamine — a material that was first isolated from shellfish — to these tests at a key step, the team could increase the sensitivity of these common bioassays by as many as 100 to 1,000 times.

More sensitive tests would allow scientists to identify pathogens, diseases and specific cellular proteins even when these "biomarkers" are present at levels far below the detection threshold of today's standard tests. Initial results show polydopamine boosted the accuracy and resolution of these tests for biomarkers of HIV, Zika virus and proteins on cancerous tumors.

"Common bioassays are the real workhorses of laboratory experiments and medical tests," said Xiaohu Gao, a UW professor of bioengineering. "By boosting the sensitivity of these tests, we can enable more accurate medical diagnoses earlier in a disease or condition, and enable more certainty and less waste in the research process."

Gao led the team that developed this simple modification for many common medical and laboratory assays. They recently published their approach — known as enzyme-accelerated signal enhancement, or EASE — in Nature Biomedical Engineering.

EASE centers on the simple addition of two biochemical components, dopamine and horseradish peroxidase, or HRP, at a key step. HRP is a common protein enzyme used to speed up the rate of reactions in biomedical research. Gao and his team discovered that HRP can connect dopamine molecules together to form the polymer chain polydopamine. Polydopamine, in turn, accumulates on the surfaces of reaction vessels, such as small Petri dishes. Once the polydopamine is present, scientists can continue the traditional steps of their protocols, but now with a substantially increased test sensitivity. Gao hopes that this simple modification will mean that scientists and medical professionals can easily incorporate EASE into their common practices and procedures.

"Scientists have been trying to improve the accuracy of these common tests for decades, but solutions often involve entirely new protocols or costly pieces of equipment," said Gao. "Understandably, researchers can be reluctant to invest in unfamiliar protocols or expensive new equipment — but EASE is a simple addition to tried-and-true assays. It's like a software upgrade, instead of changing your operating system."

These assays include some of the most common medical and laboratory tests, such as ELISA, microarrays, FISH and immunohistochemistry imaging. Some of these assays have been used for decades to help hospitals and doctors detect signatures of a disease, ailment or other conditions by looking at a patient’s blood, other body fluids or cells. Depending on the test, these telltale signs could be pieces of a bacteria or virus, a chemical, antibodies made by white blood cells, a hormone or even pieces of DNA.

But if these compounds are present at extremely low levels, diagnostic tests can miss them and return inaccurate medical information. By increasing sensitivity, EASE reduces uncertainty and even increases the amount of information these tests can provide. For example, the team used EASE to detect the presence of Zika virus in the placental tissues of primates. But EASE made the assay so sensitive that they were able to see which types of cells within the placenta were infected with Zika, Gao said.

As often happens in research, Gao and his team did not originally set out to solve this problem. Polydopamine was originally isolated from mussels decades ago, and researchers already knew that the substance can react with proteins. But the only protocol they had to form polydopamine necessitated a passive, time-consuming protocol. Lead author Junwei Li, a UW doctoral student in materials science and engineering, was using this approach to coat nanoparticles with polydopamine. But Li noticed that HRP can react with dopamine to form polydopamine, and that this approach is substantially faster than existing methods to make polydopamine.

The scientists don't fully understand why adding polydopamine boosts the sensitivity of these bioassays, and future research could elucidate the mechanism. But Gao's focus is on applying EASE to even more diagnostic tests and diseases.