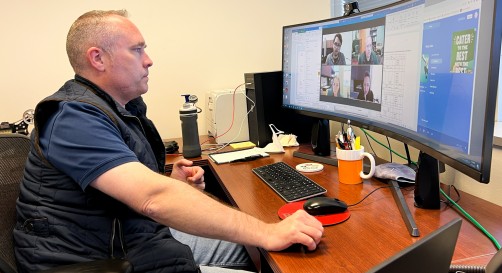 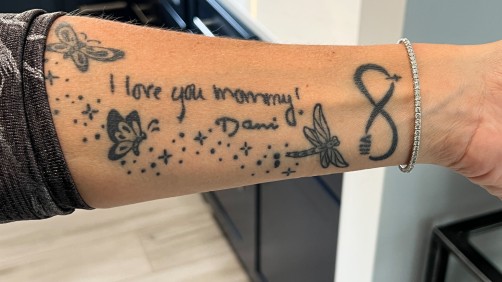 After losing her daughter Dani to suicide, Donna Heck is comforted by the words she had tattooed on her arm in her daughter’s handwriting. They also inspire Donna in her mission to prevent suicide, including her support of research at The Ohio State University Wexner Medical Center that explores how different groups respond to questions about suicidal ideation. 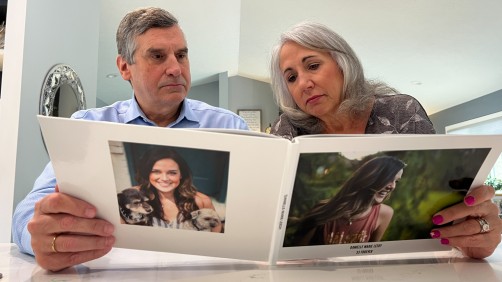 Jeff and Donna Heck lost their daughter Dani to suicide in 2019. Their non-profit organization, 33 Forever, supports research at The Ohio State Wexner Medical Center that explores how asking the right questions can better identify those at risk for suicide – especially those with access to guns, who are less likely to report suicidal ideation. 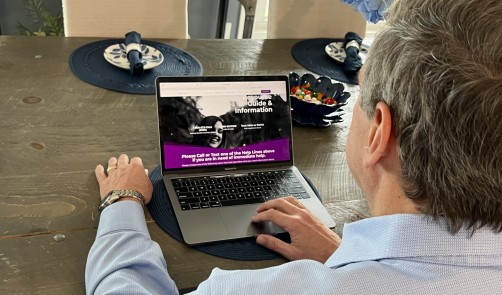 Jeff Heck and his wife Donna started 33 Forever, a non-profit organization inspired by their daughter Dani, who lost her life to suicide. The non-proft organization supports research at The Ohio State University Wexner Medical Center that aims to prevent suicide by tailoring mental health assessments for individual perspectives and situations.

Newswise — COLUMBUS, Ohio – As the stigma around mental health problems dissipates, more people are willing to talk about their struggles, including thoughts of suicide. Now, a new study by The Ohio State University Wexner Medical Center and College of Medicine aims to ensure medical professionals are asking the right questions to prevent a tragedy.

The study, published online today in the journal JAMA Network Open, found that gun owners with a recent suicide attempt are less likely than non-gun owners to report experiencing suicidal ideation, even though firearms are the most common method of suicide.

Researchers concluded that gun owners and non-gun owners experience thoughts about suicide in different ways, which may explain why the standard questions to identify those at risk of suicide often fall short.

“Not everyone experiences suicidal ideation in the same way. So, maybe our traditional ways of asking about suicidal thoughts are incomplete,” said Craig Bryan, a clinical psychologist and director of the Division of Recovery and Resilience at Ohio State’s Department of Psychiatry and Behavioral Health. “Just a simple shift in questioning, adding one more different perspective or a different angle to ask about suicidal thoughts could potentially help us to identify people who are in a vulnerable state.”

Bryan, author of the book Rethinking Suicide: Why Prevention Fails, and How We Can Do Better, says this includes amending assessments to go beyond asking someone if they’ve thought about suicide by asking if they’ve considered a method of suicide, which gun owners are more likely to have an answer to.

He says combining more comprehensive questions with simple barriers to immediate gun access, such as locking firearms in a safe or asking someone they trust to store them, can save lives.

“Suicidal crises tend to come on suddenly, but don't last very long. So, if we limit access to lethal methods during that short window of time, that could potentially prevent a suicide,” Bryan said.

Donna and Jeff Heck of Lexington, Ohio, started supporting Bryan’s research after losing their 33-year-old daughter, Dani, to suicide in 2019. At the time, Dani was planning a new business to help others suffering with mental illness and suicidal thoughts.

Now her parents are carrying out her dreams through the 33 Forever, Inc., a nonprofit created in Dani’s honor.

“She had a dark moment that she couldn't get through, unfortunately, and that's why we lost her, but she believed that you could,” said Jeff Heck. “It's about trying to provide people with resources to help and hope. And understanding that, you know, you can see tomorrow, you’ve just got to get through the moment. And if you can get through the moment, you can be here tomorrow and you can live a good life and you can overcome.”

To learn more about how to help others get through these dark moments, 33 Forever is supporting Bryan’s suicide prevention research.

“These standard questions are important to ask, but if we can tweak those and get to the root of the problem, and get people to actively respond, again, it's going to save lives,” Jeff Heck said.

Donna Heck said that, after losing someone to suicide, people often wonder what they could have done.

“Losing a child is awful,” Donna Heck said. “Losing a loved one is awful, but there's another layer when you lose someone to suicide because, ‘What did you miss? What could you have done to help change the situation?’”

That’s why Bryan says questions should be expanded and be tailored to individuals.

“Part of the reason that we've not been better at preventing suicide is we always try to find, ‘What's the one path that everybody follows?’ But there is no single path. There are multiple paths, and we need to customize different strategies, interventions and prevention approaches for those different pathways.”