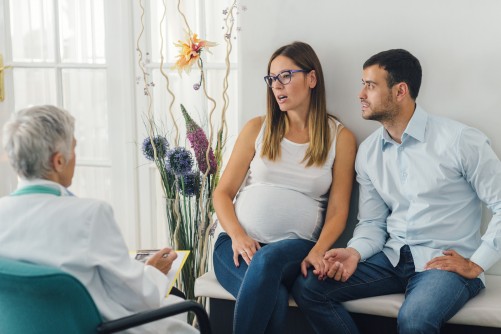 Preterm birth risk test would offer the opportunity for medical interventions to delay birth or increase fetus viability to save lives and reduce lifelong disabilities. 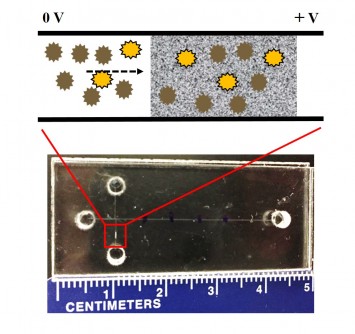 Bottom: The five-centimeter microfluidic chip. Top: Section of microfluidic channel where electric current moves the sample onto a porous material for enrichment before isolation of P1. Yellow: Fluorescent P1 peptide in sample.

Newswise — Preterm birth is the leading cause of neonatal morbidity and mortality. Among the many underlying causes of pregnancy-associated complications, it is known that infection and inflammation are highly significant risk factors. Now, researchers funded by the National Institute of Biomedical Imaging Bioengineerng have developed a system to capture and identify a scarce blood peptide (a fragment of an inflammatory protein) called P1 that can predict increased risk of preterm birth. Early detection offers the opportunity to begin medical interventions to delay birth or increase fetus viability to save lives and reduce lifelong disabilities.

There are a range of interventions for pregnant woman that can reduce the risk of preterm birth, if identified early, which include steroid injections that strengthen the lungs of the fetus, and preventive measures by the mother such as optimizing nutrition and other lifestyle changes.

Now, a research team at Brigham Young University, led by Professor Adam T. Woolley, Ph.D. Professor, Department of Chemistry, has developed a microfluidic chip, often called a lab-on-a chip, which performs multiple steps to capture and accurately identify the P1 peptide that predicts preterm birth. The work is published in the March online issue of Electrophoresis. 2

Said Tiffani Lash, Ph.D., director of the NIBIB program in Microfluidic Bioanalytical Systems, “It is exciting to see the continued growth of microfluidic technologies being used as miniaturized diagnostic platforms, particularly in this case for reducing the incidence of preterm labor and delivery. This tiny yet sophisticated technology has great potential to be of tremendous significance on the personal, public health, and even economic levels both in the U.S. and worldwide.”

The chip, which is only about 1 x 2 inches, is a miniature laboratory. It is known as an “integrated” chip because it performs multiple processing steps on a single chip. This is achieved by moving the sample through different areas or reservoirs on the chip in which the sample is further processed to eventually isolate and confirm the presence of the substance of interest -- indicating the presence of disease.

In this chip, the team is using solid phase extraction and microchip electrophoresis. The solid phase extraction is the first step, which uses the special chemical properties of the preterm birth P1 peptide to concentrate and separate it from most of the other substances in a blood sample. The next step, microfluidic electrophoresis, uses an electrical current to move and further separate the P1 molecules from any other remaining components. Finally, the enriched P1 peptide is detected as it migrates to a specific position in the microfluidic channel.

The ultimate goal is to place a single drop of blood on the chip, and after processing, receive a “yes” or “no” answer to whether the peptide which indicates increased risk of preterm birth, is present.

The chip used in these experiments is a prototype, which will need refinement and optimization before it is ready to be commercialized and used in various health care settings. But, the current results, are extremely encouraging.

“Demonstrating the ability to detect minute amounts of the P1 peptide is the really tough part,” said Woolley. “We are quickly moving toward a chip that is inexpensive, small, fast and requires only a single drop of blood. Our team is working towards a final product that is easily used by individuals in a range of settings including hospitals and clinics in the U.S., as well as in rural and underserved communities around the world.”

Many diseases including cancer, degenerative conditions, and infections release substances into the blood that can give an early indication of disease. Typically, such biomarkers are at very low concentrations that cannot be routinely captured and analyzed. Therefore, Woolley says, the isolation and concentration strategy developed here has the potential to be adapted for identifying a range of diseases before any symptoms are observed. Early identification of patients with risk factors for a number of disorders would allow for early treatment that could potentially stop the development of disease in its earliest stages. 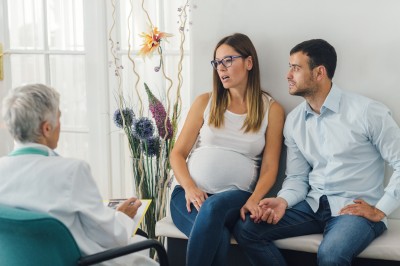 Caption: Preterm birth risk test would offer the opportunity for medical interventions to delay birth or increase fetus viability to save lives and reduce lifelong disabilities. 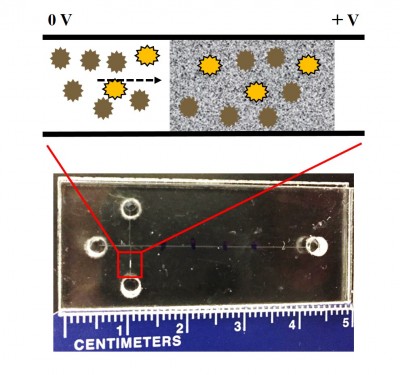 Caption: Bottom: The five-centimeter microfluidic chip. Top: Section of microfluidic channel where electric current moves the sample onto a porous material for enrichment before isolation of P1. Yellow: Fluorescent P1 peptide in sample.