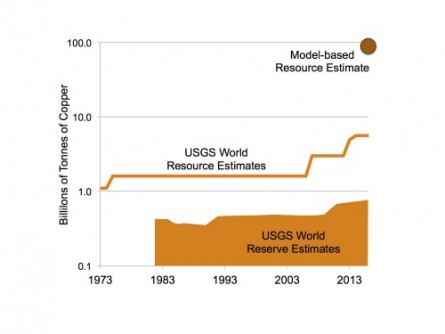 Comparison of changing estimates for copper reserves, resources and theoretical estimate of ultimate resource to depth of 3.3 km. These estimates are based on grades similar to those of deposits exploited today. If lower grades become feasible to mine, as has occurred over the past century, the resource size could increase significantly. Note log scale.

Newswise — Some scientists have declared that mineral deposits containing important non renewable resources such as copper and zinc will be exhausted in a few decades if consumption does not decrease. Reaching the opposite conclusion, the international team of researchers shows that even though mineral resources are finite, geological arguments indicate that they are sufficient for at least many centuries, even taking into account the increasing consumption required to meet the growing needs of society. How can this difference be explained?

“Do not confuse the mineral resources that exist within the Earth with reserves, which are mineral resources that have been identified and quantified and are able to be exploited economically. Some studies that predict upcoming shortages are based on statistics that only take reserves into account, i.e. a tiny fraction of the deposits that exist”, explains Lluis Fontboté, Professor in the Department of Earth Sciences, University of Geneva. To define reserves is a costly exercise that requires investment in exploration, drilling, analyses, and numerical and economic evaluations. Mining companies explore and delineate reserves sufficient for a few decades of profitable operation. Delineation of larger reserves would be a costly and unproductive investment, and does not fit the economic logic of the modern market.

The result is that the estimated life of most mineral commodities is between twenty to forty years, and has remained relatively constant over decades. Use of these values to predict the amount available leads to the frequently announced risks of impending shortages. But this type of calculation is obviously wrong, because it does not take into account the amount of metal in lower quality deposits that are not included in reserves and the huge amount of metal in deposits that have not yet been discovered. Some studies have produced figures that include the known and undiscovered resources, but as our knowledge on ore deposits in large parts of the Earth’s crust  is very fragmentary, these estimates are generally very conservative.

The vast majority of mined deposits have been discovered at the surface or in the uppermost 300 meters of the crust, but we know that deposits are also present at greater depths. Current techniques allow mining to depths of at least 2000 to 3000 meters. Thus, many mineral deposits that exist have not yet been discovered, and are not included in the statistics. There have been some mineral shortages in the past, especially during the boom related to China’s growth, but these are not due to a lack of supplies, but to operational and economic issues. For instance, between the discovery of a deposit and its effective operation, 10 to 20 years or more can elapse, and if demand rises sharply, industrial exploitation cannot respond instantly, creating a temporary shortage.

“The real problem is not the depletion of resources, but the environmental and societal impact of mining operations”, says Professor Fontboté. Mining has been undeniably linked to environmental degradation. While impacts can be mitigated by modern technologies, many challenges remain. The financial, environmental and societal costs of mining must be equitably apportioned between industrialized and developing countries, as well as between local communities near mines and the rest of society. “Recycling is important and essential, but is not enough to meet the strong growth in demand from developing countries. We must continue to seek and carefully exploit new deposits, both in developing and in industrialized countries”, says the researcher at the University of Geneva.

The importance of research

But how can we protect the environment while continuing to mine? Continuing research provides the solutions. If we are to continue mining while minimizing associated environmental effects, we need to better understand the formation of ore deposits, to open new areas of exploration with advanced methods of remote sensing . The continual improvement of exploration and mining techniques is reducing the  impact on the Earth’s surface. “Rapid evolution of technologies and society will eventually reduce our need for mineral raw materials, but at the same time, these new technologies are creating new needs for metals, such as many of the 60 elements that make up every smart phone”, adds Professor Fontboté.

The geological perspective that guided the present study leads to the conclusion that shortages will not become a threat for many centuries as long as there is a major effort in mineral exploration, coupled with conservation and recycling. To meet this challenge, society must find ways to discover and mine the needed mineral resources while respecting the environment and the interests of local communities.