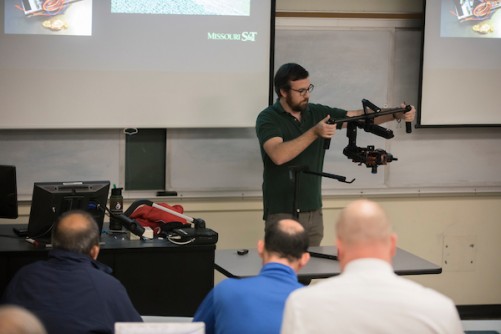 Newswise — ROLLA, Mo. _ From U.S. Navy laboratories to battlefields in Afghanistan, researchers are lining up to explore the use of unmanned aerial vehicles to detect unexploded landmines. At Missouri University of Science and Technology, civil engineering doctoral student Paul Manley is enlisting a third variable —plant health — to see if drones can be used to more safely locate such weapons of destruction.

Manley’s Ph.D. research leverages his master’s thesis work in biology at Virginia Commonwealth University with the resources of Missouri S&T. In his case, that notably includes the MinerFly support team, which helps researchers such as Manley and thesis adviser Dr. Joel Burken with UAV construction, flight tests and navigating Federal Aviation Administration regulations.

“At VCU, Paul’s experiments on plant responses to explosives were at the leaf level and in the lab,” says Burken, Curators’ Distinguished Professor and chair of civil, architectural and environmental engineering. “Now his research can be applied at the field level with the use of UAVs.”

The hyperspectral camera Manley favors is no ordinary point-and-shoot. Rather, the device’s higher spectral resolution allows for image collection across hundreds of bands that can detect subtle changes in how plants such as corn and sorghum gain or lose water and nutrients, or how they biochemically respond to stress.

The research is funded in part through Missouri S&T’s share of a five-year, $20 million National Science Foundation grant to nine institutions across the state that are teaming up to better understand climate variability and its potential agricultural, ecological and social impacts.

The consortium enables Manley to conduct test flights at locations such as the University of Missouri-Columbia’s Bradford Research Center as well as the Southwest Research Center near Mount Vernon, Missouri. Soil, terrain and crop types vary by location.

The project, “Missouri Transect: Climate, Plants and Community” received federal funding from the Experimental Program to Stimulate Cooperate Research (EPSCoR), with a goal of building research teams and expanding research capacity across the state.

Those same sensors are now being pointed toward the topic of detecting landmines and explosives. Existing landmine detection methods are far from ideal, Manley explains.

“Currently, you have people walking around the minefields, leading animals on leashes, tilling up the surface to just detonate the mines and get it over with, or they are using ground-penetrating radar to detect these in the subsurface,” Manley says. Another innovative device —constructed from plastic, iron and bamboo, and powered by wind — would need to be replaced each time it detected any of the more than 100 million unexploded landmines across the world.

“These detection methods are really slow, and they’re expensive, and they all involve people out in the minefields doing this work, so it’s dangerous,” he says.

Observing changes in plant health to determine the presence of unexploded landmines is not dissimilar from Manley’s earlier work. Over time, he explains, the mine casings can degrade, causing changes in soil properties as compounds then leach into the subsurface.

Explosive ingredients such as TNT and RDX, also known as T4, are “taken up by plants readily,” he says.

“RDX gets into groundwater, while TNT tends to stay in the roots. And RDX is readily taken into the leaves.”

By combing the knowledge of how plants and chemicals interact and the new technical capabilities to ‘see’ how plants behave from the sky, Manley aims to have a new approach to help disarm minefields around the globe — and change the world for the better.