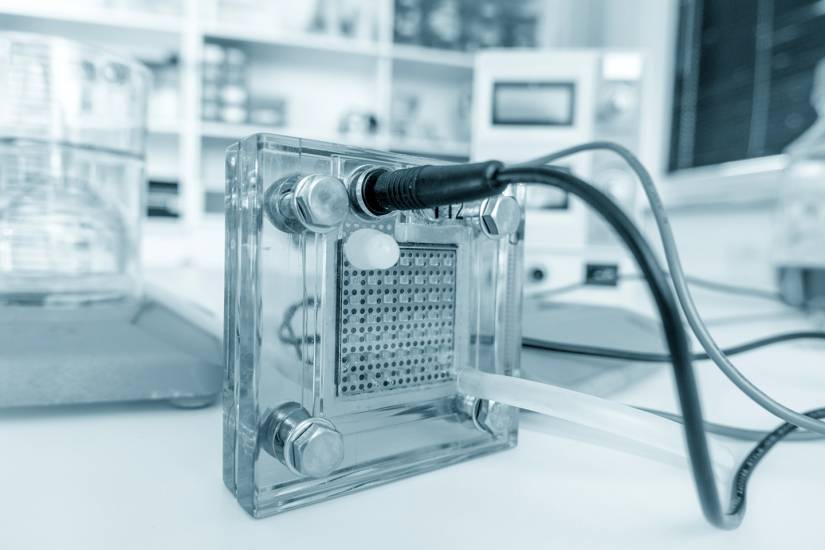 Chao Wang, a Johns Hopkins assistant professor of chemical and biomolecular engineering, in his lab. At left is postdoctoral fellow Lei Wang, another author of the related research article.

A report of the findings, to be published Feb. 22 in Science, offers promise towards faster, cheaper production of electrical power using fuel cells, but also of bulk chemicals and materials such as hydrogen.

“Every material experiences surface strain due to the breakdown of the material’s crystal symmetry at the atomic level. We discovered a way to make these crystals ultrathin, thereby decreasing the distance between atoms and increasing the material’s reactivity,” says Chao Wang, an assistant professor of chemical and biomolecular engineering at The Johns Hopkins University, and one of the study’s corresponding authors.

Strain is, in short, the deformation of any material. For example, when a piece of paper is bent, the intricate lattices that hold the paper together are changed in response to the applied force.

In this study, Wang and colleagues manipulated the strain effect, or distance between atoms, causing the material to change dramatically. By making those lattices incredibly thin, roughly a million times thinner than a strand of human hair, the material becomes much easier to manipulate just like how one piece of paper is easier to bend than a thicker stack of paper.

"We’re essentially using force to tune the properties of thin metal sheets that make up electrocatalysts, which are part of the electrodes of fuel cells," says Jeffrey Greeley, professor of chemical engineering at Purdue and another one of the paper’s corresponding authors. "The ultimate goal is to test this method on a variety of metals."

“By tuning the materials’ thinness, we were able to create more strain, which changes the material’s properties, including how molecules are held together. This means you have more freedom to accelerate the reaction you want on the material’s surface,” explains Wang.

One example of how optimizing reactions can be useful in application is increasing the activity of catalysts used for fuel cell cars. While fuel cells represent a promising technology toward emission-free electrical vehicles, the challenge lies in the expense associated with the precious metal catalysts such as platinum and palladium, limiting its viability to the vast majority of consumers. A more active catalyst for the fuel cells can reduce cost and clear the way for widespread adoption of green, renewable energy.

Wang and colleagues estimate that their new method can increase catalyst activity by 10 to 20 times, using 90 percent less of precious metals than what is currently required to power a fuel cell.

“We hope that our findings can someday aid in the production of cheaper, more efficient fuel cells to make environmentally-friendly cars more accessible for everybody,” says Wang.

Other study authors include Lei Wang, David Raciti, Michael Giroux of the Johns Hopkins University; Zhenhua Zeng and Tristan Maxson of Purdue University, and; Wenpei Gao and Xiaoqing Pan of the University of California, Irvine.