More Isn’t Always Better When It Comes to Health Care, Older Americans Say – but Many See Mismatch in Need & Use

Dr. Jeffrey Kullgren comments on findings from the National Poll on Healthy Aging, about older Americans' perceptions of overuse of health care. 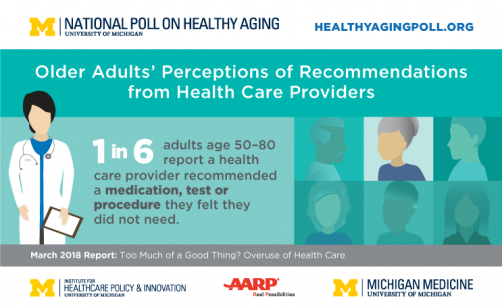 Key findings from the National Poll on Healthy Aging's poll of Americans over 50, about perceived overuse of health care

Newswise — ANN ARBOR, MI – Doctors and older patients may disagree more often than either of them suspects about whether a particular medical test or medicine is truly necessary, according to findings from a new poll of Americans over age 50.

Improving communication about that mismatch of opinions, the poll suggests, might reduce the use of unneeded scans, screenings, medications and procedures – and health care costs as well.

Only 14 percent of people over age 50 believe that more is usually better when it comes to health care, according to the new findings from the National Poll on Healthy Aging.

But one in four say their health providers often order tests or prescribe drugs that they don’t think they really need. One in six said it had happened in the last year -- but about half of them followed through with the test or filled the prescription anyway.

On the flip side, about 1 in 10 of those polled said their doctor or other health provider had told them that a test or medication they’d asked for wasn’t needed. Most of them said the provider explained why, but 40 percent didn’t completely understand the explanation.

The poll was conducted in a nationally representative sample of 2,007 Americans between the ages of 50 and 80 by the University of Michigan Institute for Healthcare Policy and Innovation. It was sponsored by AARP and Michigan Medicine, U-M’s academic medical center.

“The new findings suggest patients and providers need to work together more to prevent overuse of health care services that provide the least value to patients,” says U-M’s Jeffrey Kullgren, M.D., M.S., M.P.H., who designed the poll and analyzed its results.

“Patients should speak up when they aren’t sure if a test or medication recommended to them is needed,” he says. “And providers need to communicate about how a particular service will – or will not – affect the patient’s health, both when they’re recommending it and when a patient has requested it.”

Overuse from the patient perspective

Kullgren, an assistant professor of internal medicine and a member of IHPI, has studied overuse and appropriate use of many types of health care. But, he says, most studies have been done from the point of view of providers or health care systems. That has led many to focus on patient demand, and resistance to being denied a service they expect or have asked for, as major drivers of overuse and cost.

The new poll data give the perspective of those who use the most health care in America – older adults. In all, 54 percent of those polled said that in general, they believe that health providers often recommend tests, medications or procedures that patients don’t really need.

This means doctors and other clinicians may have more leeway than they might realize to hold back on recommending services that hold little or no value for a particular type of patient – or to help patients understand why a service they’re asking for probably won’t help them.

“These survey results show us that more attention needs to be focused on improving communication between patients and doctors,” says Alison Bryant, Ph.D., senior vice president of research for AARP. “Encouraging patients and doctors to routinely discuss the need for recommended procedures and medications should help prevent unnecessary treatments and cut health care costs.”

To help providers and patients accomplish this, Kullgren points to the “Choosing Wisely” website created by medical professional groups as a central source of information about which tests and treatments hold low value for certain patients. It provides specific examples, based on medical research, and gives explanations using language that both patients and providers can understand.

“Using such information during a clinic visit, and providing it to a patient after recommending a service or turning down a request, could go a long way toward reducing overuse,” says Preeti Malani, M.D., director of the National Poll on Healthy Aging and a professor of internal medicine at the U-M Medical School who specializes in infectious diseases and geriatrics.

And when a provider recommends a medical service but the patient isn’t sure it is needed, better communication could increase use of services that provide the most value, she adds.

In the poll, 50 percent of the patients who had been told they needed an x-ray, blood test or other test, but weren’t sure they needed it, went on to have it anyway. Among those who had received a medication recommendation that they didn’t think they needed, 41 percent still filled the prescription.

If the provider had recommended those tests or medicines based on evidence that they held high value for that particular patient, then it’s concerning if some patients didn’t follow through. But past research has shown that providers sometimes order tests or prescribe medications without being aware of the latest evidence about who gets the most benefit from them, and who doesn’t. They may even order them to avoid patient dissatisfaction or legal liability.

The poll results are based on answers from a nationally representative sample of 2,007 people ages 50 to 80. The poll respondents answered a wide range of questions online. Questions were written, and data interpreted and compiled, by the IHPI team. Laptops and Internet access were provided to poll respondents who did not already have it. A full report of the findings and methodology is available at www.healthyagingpoll.org.