Mother bats use baby talk to communicate with their pups 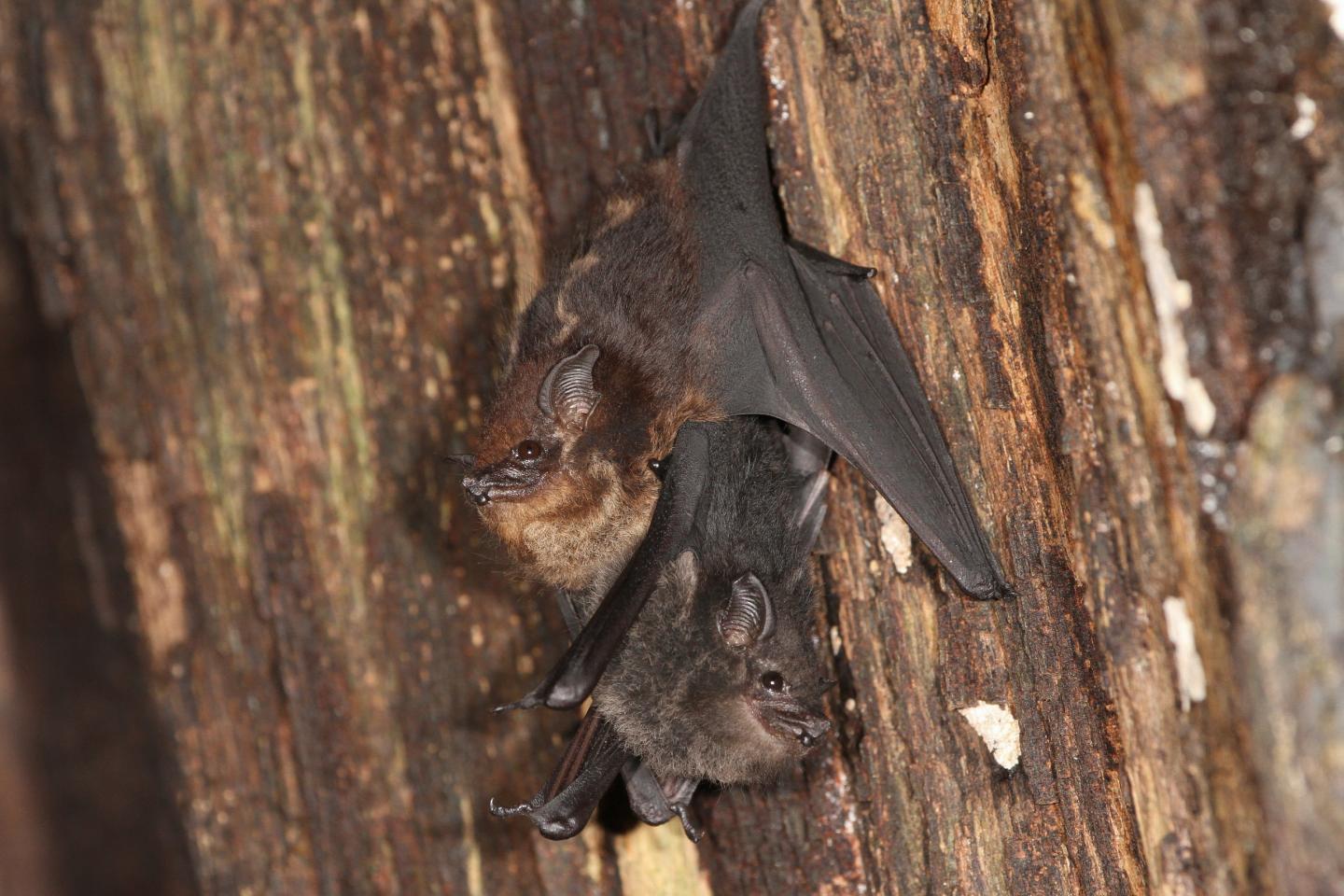 Mother-pup pair of the greater sac-winged bat, Saccopteryx bilineata, in their daytime roost. The pup (dark fur color) is holding on to the mother's belly (light fur color).

Newswise — When talking to babies, humans slow down their speech, raise their pitch and change the "color" of their voice. This "baby talk," as people know it, increases the infant's attention and facilitates language learning. Among animals, mothers often engage in pup-directed vocalizations too, but does this also imply voice changes? A team of scientists that included Smithsonian Tropical Research Institute (STRI) researchers explored whether infant-directed communication in bats resulted in vocalization changes.

They focused on the greater sac-winged bat Saccopteryx bilineata, a common Central and South American species with a large vocal repertoire employed in the elaboration of complex songs for territorial defense and courtship. Female choice in mating is very pronounced in this species, which probably led to the complexity of courtship vocalizations in males.

During their first three months of life, as S. bilineata pups start experimenting with their "speech," female and male adult bats respond to them differently. Through sound recordings of their vocal interactions, the research team found that mother bats interact with pups as they "babble," which could be interpreted as positive feedback to pups during vocal practice.

Much like human "baby talk," the pup-directed vocalizations of adult females presented a different "color" and pitch than the calls directed towards other adult bats. Male bats also communicated with the pups, but in a way that seemed to transmit the "vocal signature" of their social group.

"Pup isolation calls are acoustically more similar to those of males from the same social group than to those of other males," said Mirjam Knörnschild, STRI research associate and co-author of the paper. "These results suggest that adult male vocalizations may serve as guidance for the development of group signatures in pup calls."

This is the first time that scientists describe a phenomenon that could resemble "baby talk" among bats, indicating that parent-offspring communication in bats is more complex than previously thought and opening new avenues for further research.

"These results show that social feedback is important during vocal development, not only in humans but also in other vocal-learning species like Saccopteryx bilineata," said Ahana Fernandez, former STRI visiting scientist who conducted this research as part of her doctoral thesis at the Free University Berlin and is now a post-doctoral researcher at the Natural History Museum in Berlin. "I believe that bats are a very promising taxon to investigate key shared features of language, such as the vocal learning ability, and that this study will inspire further studies in the biolinguistics field."

Members of the research team are affiliated with STRI, the Museum of Natural History Berlin and the Animal Behavior Lab at the Free University of Berlin. Research was funded by the Elsa-Neumann Foundation, a Heisenberg Fellowship and the German Research Foundation.