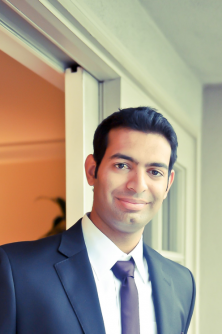 KEY FINDINGS
Newswise — UCLA researchers have discovered that a combination of high doses of radiotherapy and hormonal therapy provides the best chance of decreasing the mortality rate in men with aggressive prostate cancer. The findings also suggest that such a multimodal treatment approach has the best chance of preventing metastatic disease and improving overall long-term survival.

The study, led by UCLA researcher Dr. Amar Kishan in collaboration with researchers at 11 institutions across the United States, is the first of its kind to compare outcomes between extremely dose-escalated radiotherapy and traditional treatments, such as radiation and prostatectomy, in men with cancers that are Gleason score 9 or 10 (the highest score possible).

"The type of aggressive form of prostate cancer that we focused on has sometimes been regarded as so high risk that some patients even forgo local treatments, like surgery or radiation, because they are worried that the cancer has already spread and is incurable," said Kishan, who is an assistant professor in the departments of radiation oncology and urology, and a member of the Institute of Urologic Oncology at UCLA. "Our findings in fact show just the opposite — in this study, the patients with the best outcomes were those who received an aggressive therapy that included so-called 'extremely-dose escalated radiotherapy' along with hormonal therapy."
BACKGROUND
The study builds upon previous research led by Kishan and colleagues, which provided the first convincing evidence that surgery and standard radiation-based treatments offer equivalent outcomes for men with prostate cancer, and suggested a potential benefit over both to extremely dose-escalated radiation. The ideal therapeutic approach for these patients has long been controversial, in part because technologies and radiation-based treatments strategies have evolved significantly over time. The effectiveness of these approaches is of even greater importance for the most aggressive forms of prostate cancer, which are more likely to lead to metastatic disease and eventually death.
Several studies have shown that increasing the dose of radiotherapy beyond standard doses (known as extreme dose-escalation) in combination with hormonal therapy has improved short-term outcomes, but no prior study has shown a difference in mortality rates or long-term survival in any group of patients with prostate cancer. Previous research comparing patients treated with radical prostatectomy to radiotherapy-based treatments have generally included patients treated over the span of multiple decades, many of whom were treated with lower doses of radiation and/or with insufficient hormonal therapy. Kishan's team hypothesized that by using a large pool of patients with aggressive disease treated within a contemporary timeframe, they could better assess the effectiveness of modern treatments in these high-risk patients.

METHOD
In the three-year study, the UCLA-led team analyzed 1,809 men who were treated for Gleason score 9-10 prostate cancer from 2000 to 2013 at UCLA and other sites in the United States and Europe. The findings specifically included advanced prostate cancer patients who were treated since 2000 because the standard of care for these patients has significantly improved over time. The scientists used institutional databases to identify patients and obtained clinical follow up to assess long-term treatment outcomes.
IMPACT
Prostate cancer is the most common malignancy among men in the United States. About one man in nine will be diagnosed with prostate cancer during his lifetime, and nearly 30,000 men will die from the disease annually. Identifying the optimal treatment strategies for this malignancy, and in particular highly aggressive forms of the disease, are of vital importance to the public.

The treatments received by men included in the study are much more likely to be similar to those being offered to patients at various medical institutions across the world today, compared to the treatment methods assessed in prior research studies. The findings have the potential to help physicians better identify men with prostate cancer who will benefit from a multimodal therapeutic approach and advise patients of the effectiveness of different treatment options.

"There are, of course, limitations to this study,"Kishan adds. "Most notably, it was a retrospective study, meaning patients received a certain type of treatment largely based on patient and physician preferences, rather than in the context of a trial. It is possible that outcomes in the standard radiation group were worse because the patients themselves were sicker and not good candidates for the boost of radiation. From the surgery standpoint, nearly 40 percent of patients did get postoperative radiation - which is much higher than in other studies--but some might argue that if postoperative radiation was used even more frequently, surgical outcomes would have been better. That is certainly possible."
AUTHORS
Kishan is the first author. The senior author is Dr. Christopher King at the David Geffen School of Medicine at UCLA. Additional authors are from Cleveland Clinic; Johns Hopkins University; Harvard Medical School; Fox Chase Cancer Center; Mount Sinai Hospital; Wheeling Jesuit University; University of Michigan; Oslo University Hospital; Oakland University; Veterans Affairs Greater Los Angeles Healthcare System; and UCLA. Kishan and King are members of the UCLA Jonsson Comprehensive Cancer Center.
JOURNAL
The study will be published online March 6 in The Journal of the American Medical Association.
***
The UCLA Jonsson Comprehensive Cancer Center has more than 500 researchers and clinicians engaged in cancer research, prevention, detection, control, treatment and education. One of the nation's largest comprehensive cancer centers, the UCLA Jonsson Comprehensive Cancer Center is dedicated to promoting research and translating basic science into leading-edge clinical studies

The Journal of the American Medical Association