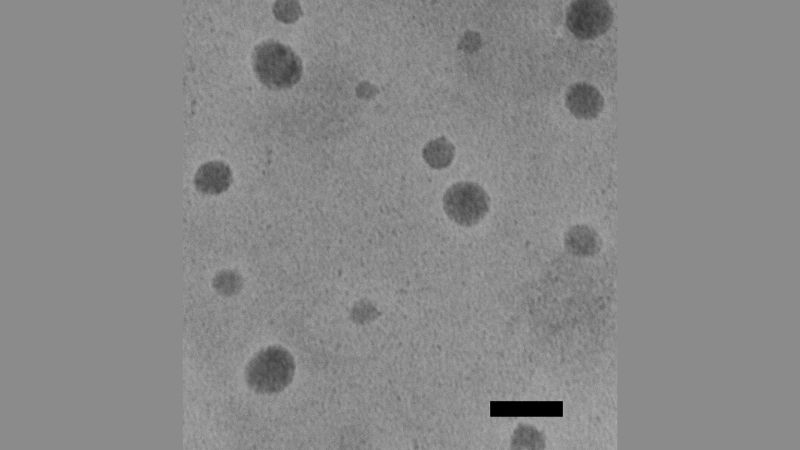 A microscopic image of the nanoparticles used in the study. The black scale bar is 100 nm in size.

Newswise — Scientists at Johns Hopkins report they have designed and successfully tested an experimental, super small package able to deliver molecular signals that tag implanted human cancer cells in mice and make them visible for destruction by the animals’ immune systems. The new method was developed, say the researchers, to deliver an immune system “uncloaking” device directly to cancer cells.

Conventional immune therapies generally focus on manipulating patients’ immune system cells to boost their cancer-killing properties or injecting drugs that do the same but often have toxic side effects.

Results of the proof-of-concept experiments were published online Feb. 7 in the Proceedings of the National Academy of Sciences.

A hallmark of cancer biology is a tumor cell’s ability to essentially hide from the immune system cells whose job is to identify and destroy cancer cells. Current cellular immunotherapies, notably CAR-T, require scientists to chemically alter and enhance a patient’s own harvested immune system T-cells — an expensive and time-consuming process, say the researchers. Other weapons in the arsenal of immunotherapies are drugs, including so-called checkpoint inhibitors, which have broad effects and often lead to unwanted immune-system-associated side effects, including damage to normal tissue.

By contrast, the Johns Hopkins team sought an immune system therapy that can work like a drug but that also individually engineers a tumor and its surrounding environment to draw the immune system cells to it, says Jordan Green, Ph.D.

Green is the director of the biomaterials and drug delivery laboratory and a professor of biomedical engineering at the Johns Hopkins University School of Medicine. “And our process happens entirely within the body,” Green says, “requiring no external manipulation of a patient’s cells.”

To develop the new system, Green and his team, including Stephany Tzeng, Ph.D., a research associate in the Department of Biomedical Engineering at Johns Hopkins, took advantage of a cancer cell’s tendency to internalize molecules from its surroundings. “Cancer cells may be easier to directly genetically manipulate because their DNA has gone haywire, they divide rapidly, and they don’t have the typical checks and balances of normal cells,” says Green.

The team created a polymer-based nanoparticle — a tiny case that slips inside cells. They guided the nanoparticles to cancer cells by injecting them directly into the animals’ tumors.

“The nanoparticle method we developed is widely applicable to many solid tumors despite their variability on an individual and tumor type level,” says Green, also a member of the Johns Hopkins Kimmel Cancer Center.

Once inside the cell, the water-soluble nanoparticle slowly degrades over a day. It contains a ring of DNA, called a plasmid, that does not integrate into the genome and is eventually degraded as the cancer cell divides, but it stays active long enough to alter protein production in the cell.

The additional genomic material from the plasmid makes the tumor cells produce surface proteins called 4-1BBL, which work like red flags to say, “I’m a cancer cell, activate defenses.” The plasmid also forces the cancer cells to secrete chemicals called interleukins into the space around the cells. The 4-1BBL tags and interleukins are like magnets to immune system cells, and they seek to kill the foreign-looking cancer cells.

“Essentially, we’re forcing the tumor to open itself up and instruct immune cells to kill it,” says Tzeng.

In their animal experiments, Tzeng and the Johns Hopkins team injected the loaded nanoparticles into tumors created by implanting mice with either human melanoma or colon cancer cells.

A control group of mice implanted with melanoma cells received systemically an immunotherapy drug known as anti-PD-1 antibody. All of those mice died quickly, within 2.5 to three weeks, due to tumor growth.

Then, the research team injected other groups of mice, which were also injected with the cancer cells, with nanoparticles containing only one or both of the “uncloaking” signals — the genetically encoded 4-1BBL tags and interleukins. In mice with implanted melanomas, the nanoparticles that combined the two signals had a stronger effect than either signal alone. The median, or midpoint, survival of the mice with the combo signal package was 40 days, and about 20% of them lived through the end of the 60-day study period.

The researchers also saw that some of the mice in the treated melanoma group developed vitiligo, a condition in which skin cells lose their pigment. It occurs in humans too, including in people undergoing immunotherapy for melanoma. “It’s generally thought that vitiligo in melanoma patients is a sign that the immunotherapy treatment is working, and the immunotherapy is spreading to other parts of the body where other melanocytes reside,” says Tzeng.

The tumor shrank away in all of the mice with implanted colon tumors that received the nanoparticles with both signals, and they survived through the entire 60-day study period. When the researchers reinjected human colon cancer cells into the sides of mice opposite the original tumors, unlike with age-matched controls, the newly implanted cancer cells failed to form a tumor, suggesting a lasting effect of the boosted immune system.

“The hope is that, eventually, we could develop nanoparticles that hold instructions for a variety of immune-related signals,” says Green, who cautioned that use of the nanoparticle system will remain experimental for years to come. “We are developing this system as an ‘off-the-shelf’ therapy that can induce a personalized systemic anti-tumor response without needing to know the specific genetic makeup of the tumor beforehand.”

Other scientists who contributed to the research include Kisha Patel, David Wilson, Randall Meyer and Kelly Rhodes of Johns Hopkins.

The researchers have filed for patents related to this work.