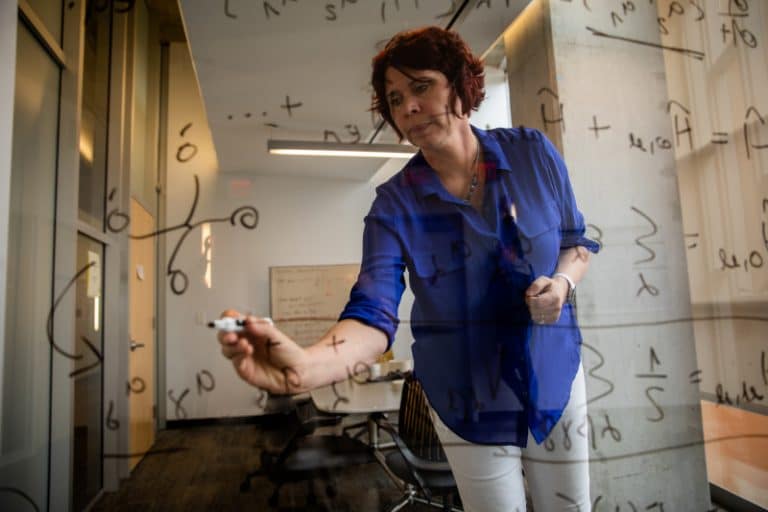 Newswise — Northern Arizona University is a partner institution in a major new initiative to establish and lead the Center for Quantum Networks, or CQN. NAU will collaborate with The University of Arizona, the lead institution on this five-year project. The new center is funded through an initial $26 million grant awarded to the University of Arizona by the National Science Foundation (NSF), and includes an additional five-year $24.6 million renewal option. The project, which will begin in October 2020, represents NAU’s first participation in an NSF-designated Engineering Research Center (ERC).

CQN aims to lay the foundations of the quantum internet, which will revolutionize how humankind computes, communicates and senses the world by creating a fabric to connect quantum computers, data centers and gadgets using their native quantum information states of "quantum bits," or qubits. Qubits offer dramatic increases in processing capacity over classical bits because they can hold more information—instead of having only a single binary value (0 or 1), qubits are capable of what is termed a "superposition" of both states (0 and 1) at the same time.

A major focus of the CQN team will be research to advance key underlying technologies, including fundamental quantum materials and devices; the quantum and classical processing required at a network node; and quantum network protocols and architectures.

In addition to addressing the enormous scientific and engineering challenges, the CQN will investigate the impact of a future quantum internet on education, workforce development, innovation and society. The White House National Quantum Coordination Office recently underscored the importance of the field by issuing "A Strategic Vision for America's Quantum Networks." The statement read, "By leading the way in quantum networking, America is poised to revolutionize national and financial security, patient privacy, drug discovery and the design and manufacturing of new materials, while increasing our scientific understanding of the universe."

NAU will receive nearly $2 million in funding as a CQN contributing partner in the areas of research, education and workforce development.

“NAU’s research contributions to this new ERC will be focused in the areas of quantum networks and quantum materials. This truly is the beginning of a new era, and we are excited to be part of this incredible interdisciplinary team,” said Inès Montaño, principal investigator for NAU’s CQN. An associate professor of applied physics and materials science, Montaño is also a core faculty member of NAU’s Center of Materials Interfaces in Research and Applications (¡MIRA!), an interdisciplinary research center focused on the development of advanced functional materials through the exploration of materials interfaces and on increasing diversity in the field of materials science.

As part of the NSF’s fourth generation of the ERC program, CQN’s mandate goes beyond creating a quantum internet—the initiative also is focused on the educational and workforce needs to propel the quantum internet age. NAU will play a leading role in the education and workforce development components of CQN, with Montaño serving as the CQN engineering workforce development co-lead and Hurst as the co-lead of the diversity and culture of inclusion.

“We are excited about introducing the next generation of scientists and engineers to quantum science and will be highly focused on regional outreach to underserved and minoritized communities,” Montaño said.

"Quantum networks have the potential to revolutionize science and engineering, but the CQN is unique in also being dedicated to understanding how this technology will impact people and society more broadly," Hurst said.

Some of the NAU team’s efforts will benefit local communities, including development of Quantum Mobile, a pilot program intended to take hands-on quantum science experiences to the rural communities of Arizona and beyond. NAU also is taking a lead in evaluation of the entire ERC, with Nena Bloom of NAU’s Center for Science Teaching and Learning (CSTL) serving as the CQN evaluation coordinator. Bloom’s team will focus on understanding the impacts of the CQN and driving future research, educational and workforce efforts in quantum information.

“The CQN is a tremendously exciting opportunity for NAU’s research enterprise as well as for our students,” said NAU President Rita Cheng. “NAU will not only contribute world-class research capability in quantum information science, but expertise in education and evaluation as well. CQN will shape the future of computing technology, and NAU faculty researchers, along with their undergraduate and graduate students, will be integral team members leading the way.”