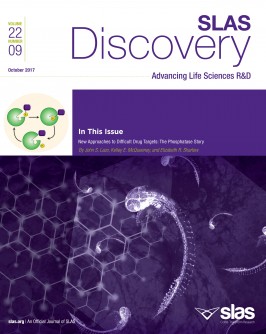 Newswise — A new review by John S. Lazo et al. (University of Virginia) in the October 2017 issue of SLAS Discovery (formerly the Journal of Biomolecular Screening) reflects on the nature of one rather large protein class that has been implicated in many human diseases – protein tyrosine phosphatases – and explores reasons why these enzymes have been eschewed by drug hunters, and how the landscape is beginning to change.

The authors place particular emphasis on how automation and innovative screens influence the search for inhibitors and activators of protein tyrosine phosphatases in the area of cancer. The resulting compounds are not only facilitating the exploration of the fundamental cellular processes controlled by phosphatases in cancers, but are creating an inflection point for new therapeutic paradigms. This is an important example of how a previously undrugged family of proteins has been approached and may be a template for other classes of protein that have the “undruggable” label.

Visit SLAS Discovery Online at http://journals.sagepub.com/toc/jbxb/22/9 to read “New Approaches to Difficult Drug Targets: The Phosphatase Story.” SLAS Discovery is one of two MEDLINE-indexed scientific journals published by SLAS. For more information about SLAS and its journals, visit www.slas.org/publications/journals.