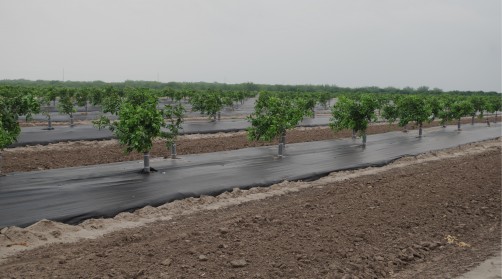 Raised beds covered with plastic mesh have proven to stop the life cycle of the Diaprepes root weevil on citrus trees in Texas. Scientists are now documenting other positive effects of the novel planting technique.

Newswise — WESLACO -- A planting design that outwitted a weevil in Texas citrus groves has yielded numerous other benefits for growers and brought better quality oranges and grapefruits to consumers, experts say.

Enter the Diaprepes root weevil in 2000. The insect was found to be chewing up Texas citrus tree roots underground, then busting through the soil and up the tree to feast on leaves. Researchers began looking for a way to disrupt the weevil’s path.

By 2009, studies found all it took to stop the pest was a layer of plastic mesh over the soil beneath the tree, according to lead scientist Dr. Mamoudou Sétamou, professor of entomology at Texas A&M University-Kingsville Citrus Center in Weslaco.

The plastic forms a barrier that the weevil cannot penetrate either from the ground up or from the tree to the soil, the researchers on the project explained, and thus the pest’s life cycle was interrupted, and it could not live there.

But after several years, Sétamou and others on the project realized that with field work, irrigation of the trees and washing rains, soil would become deposited on top of the plastic mesh layers. That led the team to try planting citrus trees on raised beds of soil and then covering the beds with plastic mesh. This design has proven effective in stopping Diaprepes root weevils and preventing soil accumulation to build.

And that might have been the end of the story, but the research team began to notice other benefits after years of watching for the weevils.

“Traditionally, the planting density in the Rio Grande Valley is 121 trees per acre,” said Alabi, who joined the project in 2013. “With the new planting design, growers can easily increase this to 165-218 trees.”

The raised beds are 10-feet wide at the base, slope to 8 feet at the top and are about 18 inches tall, Alabi said. The plastic mesh is applied across the beds in a continuous length from one end of the row to the other.

The configuration has saved irrigation water, Alabi said, because the plastic mesh reduces evaporation from the root zone meaning less water is needed. The method also reduces the need for chemical sprays against the weevils and weeds, which can’t grow through the plastic mesh.

Alabi said now that citrus greening has also emerged as a threat against citrus production, the novel planting method is being examined as a potential aid against that disease as well.

“Our hypothesis is that the new planting design will bring young citrus trees to earlier production compared to the traditional method, so the productive capacity of the grove can be realized prior to and even in the presence of citrus greening disease,” said Alabi, who is collaborating on the study with Setamou, growers and the Texas Citrus Pest and Disease Management Corp. The project was funded by the U.S. Department of Agriculture-Huanglongbing Multi-Agency Coordination Group.

“Ironically, despite the disease and pest issues, citrus acreage in Texas has been steadily increasing the last three to four years,” Alabi said. “And more interesting is an increase in gross returns per acre due to a combination of factors, including the outputs of these research efforts.”

Almost 27,000 acres of citrus in a three-county area of the Lower Rio Grande Valley annually yield more than 9 million cartons of fresh grapefruit and oranges plus 5 million cartons of juice fruit valued at more $100 million dollars, according to Texas Citrus Mutual.