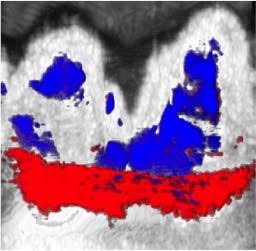 Newswise — Squid ink might be a great ingredient to make black pasta, but it could also one day make getting checked for gum disease at the dentist less tedious and even painless. By combining squid ink with light and ultrasound, a team led by engineers at the University of California San Diego has developed a new dental imaging method to examine a patient’s gums that is non-invasive, more comprehensive and more accurate than the state of the art.

“The last time I was at the dentist, I realized that the tools that are currently being used to image teeth and gums could use significant updating,” said Jesse Jokerst, a nanoengineering professor at UC San Diego and senior author of the study.

The conventional method for dentists to assess gum health is to use an instrument called a periodontal probe — a thin, hook-like metal tool that’s marked like a tiny measuring stick and inserted in between the teeth and gums to see whether and how much the gums have shrunk back from the teeth, creating pockets. This method of measuring pocket depth is the gold standard used in dentistry. A pocket depth measuring one to two millimeters indicates healthy gums while three millimeters and deeper is a sign of gum disease. The deeper the pockets, the more severe the gum disease.

However, procedures using the periodontal probe are invasive, uncomfortable and sometimes painful for the patient. Measurements can also vary greatly between dentists, and the probe is only capable of measuring the pocket depth of one spot at a time.

In a paper published on Sept. 7 in the Journal of Dental Research, Jokerst and his team at UC San Diego introduced an innovative method that can image the entire pocket depth around the teeth consistently and accurately, without requiring any painful poking and prodding.

“Using the periodontal probe is like examining a dark room with just a flashlight and you can only see one area at a time. With our method, it’s like flipping on all the light switches so you can see the entire room all at once,” Jokerst said.

The method begins by rinsing the mouth with a paste made of commercially available food-grade squid ink mixed with water and cornstarch. The squid-ink-based rinse serves as a contrast agent for an imaging technique called photoacoustic ultrasound. This involves shining a light signal — usually a short laser pulse — onto a sample, which heats up and expands, generating an acoustic signal that researchers can analyze. “Light in, sound out,” Jokerst said.

Squid ink naturally contains melanin nanoparticles, which absorb light. During the oral rinse, the melanin nanoparticles get trapped in the pockets between the teeth and gums. When researchers shine a laser light onto the area, the squid ink heats up and quickly swells, creating pressure differences in the gum pockets that can be detected using ultrasound. This method enables researchers to create a full map of the pocket depth around each tooth — a significant improvement over the conventional method.

Researchers tested their photoacoustic imaging method in a pig model containing a mix of shallow and deep pockets in the gums. While their results closely matched measurements taken using a periodontal probe, they were also consistent across multiple tests. On the other hand, measurements with the periodontal probe varied significantly from one test to another.

“It’s remarkable how reproducible this technique is compared to the gold standard,” Jokerst said.

Moving forward, the team will be collaborating with dentists and testing their method in humans. Future work also includes minimizing the taste of the squid ink oral rinse — it’s salty and somewhat bitter — and replacing laser lights with inexpensive, more portable light systems like LEDs. The team’s ultimate goal is to create a mouthpiece that uses this technology to measure periodontal health.

For more information, watch this video Q&A with Professor Jokerst.