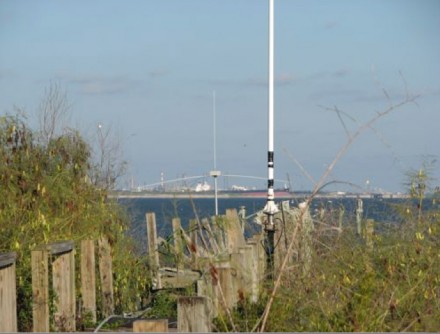 HFR is a system of radio transmitters and receivers that are used to measure ocean currents and wave action.

Previous Next
Newswise — The Gulf of Mexico Coastal Ocean Observing System is pleased to announce that it has received $450,000 to support the installation of two new High Frequency Radar (HFR) sites near the mouth of the Mississippi River through its annual funding award from the U.S. Integrated Ocean Observing System.

HFR is a system of radio transmitters along coastlines that transmit radio signals, bounce them off the ocean's surface and relay them to receivers. The signals indicate where and how fast ocean surface currents are moving and provide information about wave heights, leading to better ocean condition forecasts and faster predictions -- two vital elements when coastlines and ships are at risk from man-made and natural disasters like hurricanes, toxic algae blooms and oil spills. HFR sites operate unattended 24-hours a day, seven days a week regardless of weather conditions -- making them a cost-effective way to gather ocean data. Each pair of HF radars can produce current measurements for about 6,000 square miles, equivalent to a square of about 77 miles on each side.

The signals play a critical role in protecting public health and safety, for example by providing information to beachgoers about dangerous wave conditions and rip currents. The signals are also critical for Coast Guard search and rescue operations, greatly reducing a search area and increasing the likelihood that missing boaters will be found.

"Our coasts and citizens are vulnerable to many different risks," said Dr. Barbara Kirkpatrick, Executive Director of the GCOOS-RA. "Having HFR in place means the difference between finding someone lost at sea or telling us where oil or other chemicals from a spill are likely to wash up so we can be ready for them. We have a critical shortage of HFR sites in the Gulf so funding like this, provided through the U.S. IOOS office, is absolutely critical for expanding our coverage area and saving lives. It's as simple as that.
GCOOS is the heart of data collection for the ocean and coastal waters of the Gulf of Mexico -- collecting thousands of data points from sensors and ensuring data are reliable, timely and accurate before disseminating to all who need the information (gcoos.org/products). These data support the tools and technology that help protect public health, ensure safe and efficient navigation and jobs tied to the blue economy.

Instead of operating its own in-water assets -- like buoys, autonomous vehicles, radar systems and water-quality monitoring tools -- GCOOS collaborates with and provides grant support to ocean scientists developing and implementing their own systems and pulls all the information from these assets together in one cohesive, responsive system providing real-time information vital to the public.

In this instance, GCOOS has put out a request for proposals for the operation of these two new HFR sites that will provide surface current mapping coverage to support oil spill response needs, navigation and commerce near the approach to the mouth of the Mississippi -- one of the busiest shipping byways in the world.
Expanding HFR coverage is critical because the Gulf has the United States' highest density of energy activities and is home to 14 of the nation's top 20 U.S. ports by tonnage. With an estimated 50 percent of transported goods in the Gulf being hazardous materials, ports are also vulnerable to contaminant spills. And ship traffic in the Gulf will only increase with the expansion of the Panama Canal.
"The Gulf Coast Ocean Observing System provides vital support for the broad array of economic activities that make use of the ports, beaches, waterways and wetlands in and around the Gulf of Mexico," said U.S. Senator Roger Wicker, R-Miss. "This investment in high frequency radar at the mouth of the Mississippi River will provide a constant stream of quality data to enhance public safety and ensure the river system and its ports can continue to support a growing economy."
Currently there are 11 HFR stations in the Gulf of Mexico and along the Southeastern Atlantic coast, including new HFR sites launched by Texas A&M University's College of Geosciences in 2016 as part of the highly collaborative "Smart Gulf" initiative to provide instant oceanic and atmospheric conditions in the Gulf of Mexico.
Expanding the number of HFR sites in the Gulf of Mexico is a key priority for protecting public health in the GCOOS five-year Strategic Plan, which was developed in consultation with Gulf scientists as well as experts in port operations and emergency response.
IOOS, in partnership with the regional ocean observing systems, operates the nation's only network of high-frequency radars. The GCOOS funding is part of a coordinated effort to fill known gaps in the national ocean observing system. Additional IOOS funds are supporting expanded HFR coverage along the Washington state coast.

"Filling critical gaps in ocean data is central to our mission at U.S. IOOS," said Carl Gouldman, Director, U.S. Integrated Ocean Observing System. "Enhanced surface current monitoring via new high frequency radars around the busy hub of the Mississippi River delta has been a long- term goal both for GCOOS and nationally.  Achieving that goal with these installations will support commerce, safety and the environment."
More Information: