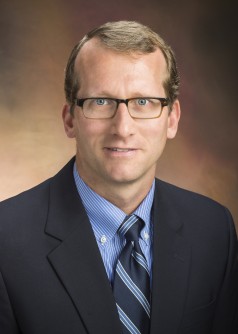 Matthew A. Deardorff, MD, PhD, is a pediatric geneticist at Children's Hospital of Philadelphia

Newswise — Philadelphia, July 6–Researchers have identified a rare genetic syndrome characterized by intellectual disability, seizures, an abnormal gait and distinctive facial features. The scientists pinpointed variants in the WDR26 gene as causes for this distinctive, yet unnamed condition. Their early research provides initial information for counseling patients and families coping with uncertainties for children with the rare, poorly recognized condition.

“Our study identifies 15 individuals now known to have this recognizable syndrome, but we expect that as this information reaches the medical community, more patients will be recognized,” said study leader Matthew A. Deardorff, MD, PhD, a pediatric geneticist at Children’s Hospital of Philadelphia (CHOP). “Our studies are very much in the early stage, but as we continue to gain more clinical and scientific knowledge about this condition, we will be able to better explain to parents what to expect.”

“Prior to our identification of individuals with changes in this gene, it was not even listed in some of the most commonly used databases,” said Deardorff. “The notable efforts by our colleagues here in the Division of Genomic Diagnostics at CHOP, and at key labs in the Netherlands and Maryland, helped us to make this discovery possible.”

The scientists reported on 15 individuals, ranging from two years old to 34 years old. All the patients had developmental delays (ranging from mild to severe), seizures, and similar facial features (such as wide mouths, prominent upper lip and gums, full cheeks and a broad nasal tip). Many had subtle abnormalities in their gait. All 15 had de novo (new) mutations—those arising in a single egg or sperm that developed into the affected patient, but did not occur in the patient’s parents.

The group at CHOP, along with global collaborators, is working energetically to understand the syndrome’s functional details and underlying mechanisms. Although the specifics are still under investigation, the authors suggest that haploinsufficiency (reduced expression) of the WDR26 gene alters multiple signaling pathways and cell functions to produce features of the syndrome.

“There is no good laboratory assay yet for the effects of these mutations, but clinicians may notice facial differences or other signs, and would typically order exome sequencing, which would diagnose this syndrome,” said Deardorff. “If testing confirms this diagnosis, we advise parents that seizures may occur, which are usually treatable with standard medicines. It may be possible that early intervention with special education can help address a child’s intellectual disability, although we do not yet have enough clinical data to develop full guidelines for medical management.”

Deardorff added that CHOP has started a patient registry to compile clinical data on this rare condition (see [email protected]), and that this data collection may offer a resource for families interested in contacting each other to share information and support. He added, “This discovery is just the first step in understanding why changes in WDR26 cause intellectual disability and seizures. With further investigation, our goal is to better understand the biology and identify specific treatments for these children.”

Institutional funds from the Children’s Hospital of Philadelphia Research Institute and CureKids New Zealand supported this research. Co-authors were from the U.S., New Zealand, France, the U.K., the Netherlands and Germany.