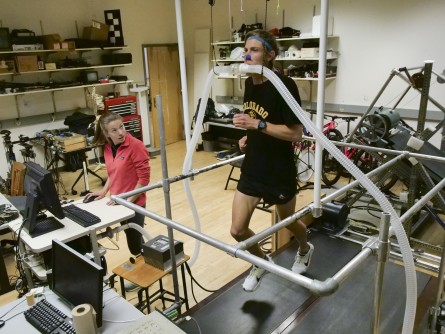 Boulder-based runner Andy Wacker tests the Nike Zoom Vaporfly while being monitored by graduate student Shalaya Kipp in the Locomotion Lab at the University of Colorado Boulder. 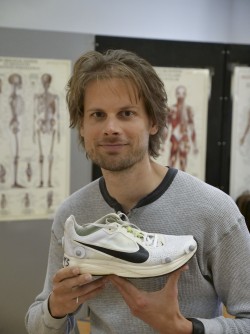 Newswise — Eleven days after Boulder-born Shalane Flanagan won the New York City Marathon in new state-of-the-art racing flats known as “4%s,” University of Colorado Boulder researchers have published the study that inspired the shoe’s name, confirming in the journal Sports Medicine that the shoes reduce the amount of energy used to run by 4 percent.

With such technology - including next-generation foam cushioning, carbon fiber plates and a thick but soft midsole - runners at a variety of speeds should be able to significantly improve their times; and for elites, the elusive 2-hour marathon is now within reach, the authors conclude.

“Our extrapolations suggest that with these shoes the technology is in place to break the 2-hour marathon barrier,” said lead author Wouter Hoogkamer, a postdoctoral researcher in the Locomotion Lab at CU Boulder. “Now, it is up to the athletes to make it happen.”

The study was conducted at the CU lab before the shoe’s July release and prompted Nike to name it the Zoom Vaporfly 4%. Today’s long-awaited publication reveals in detail what the study found and how it was done.

For the study, the researchers recruited 18 male runners in their 20s who had run a 10 km race in less than 31 minutes (a pace of about 5 minutes per mile) and also wore a size 10 shoe.

Each runner came to the lab on three separate testing days. Each day, they ran six 5-minute treadmill trials wearing each of three pairs of shoes twice: the prototype of the Nike Zoom Vaporfly 4%, the Nike Zoom Streak, and the Adidas Adios Boost 2, which Kenyan Dennis Kimetto wore when he set the official marathon world record (2:02:57) in 2014.

“We wanted to test this new prototype shoe against the best out there,” said co-author Shalaya Kipp, an Olympic middle-distance runner and graduate student in the lab.

Meanwhile, they breathed into a device that measures oxygen consumption to ascertain calories burned per second. When wearing the prototype shoe, their energy savings was between 2 percent and 6 percent, with an average of 4 percent.

“Every single day at every single speed, every runner used less energy with the prototype shoe,” said Rodger Kram, a professor in the Department of Integrative Physiology.

The researchers then calculated what that energy savings could mean for the marathon record. A 4 percent reduction in energetic cost would translate to a 3.4 percent improvement in running speed at world record marathon pace (4.41 minutes per mile), reducing the finishing time to 1:58:54, they found.

Since Nike unveiled the $250 shoe in July, skeptics have questioned its 4% claim, asking how that number was reached and whether it would apply to slower runners.

Anticipating this skepticism, the team painstakingly designed its study.

To assure that runner fatigue over time didn’t put the last shoe at a disadvantage, they asked runners to start with shoe No. 1, progress to No. 2 and No. 3, then reverse the order (No. 3, No. 2, No. 1). They also added lead pellets to the prototype shoe so it weighed the same as the others.

While the slowest pace was a 7-minute mile, “there is no reason to believe the results would be different for slower speeds, since our findings were the same at all the speeds we tested,” Hoogkamer said.

Nike Inc. funded the study, and Kram serves on the company’s scientific advisory board. But the authors maintain that this in no way influenced the results. Nike Inc. also paid to make the study open access, meaning anyone can read it in its entirety online and try to replicate it.

“We are extremely confident that other scientists will find similar results,” Kram said.

The shoe was also worn by 2017 New York Marathon men’s race winner Geoffrey Kamworor and used in the Breaking 2 Project, Nike’s recent attempt to orchestrate a sub-2 marathon in a controlled environment.

Its midsole is made with foam that, according to mechanical testing, stores and returns about twice as much energy per footfall as the other shoes tested. Some critics have suggested that its carbon fiber plate acts like a spring, giving runners an unfair advantage. But Hoogkamer says the plate acts as a rigid lever, not a spring. In an ongoing study, the researchers are exploring just how the plate works with the other technologies to save energy.

The takeaway for runners and shoe designers now:

“For performance, it seems very clear from this study that soft yet resilient shoes with thick cushioning are the way to go,” Kram said. 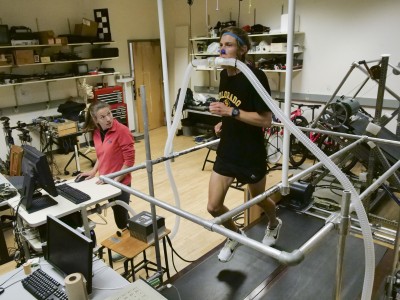 Caption: Boulder-based runner Andy Wacker tests the Nike Zoom Vaporfly while being monitored by graduate student Shalaya Kipp in the Locomotion Lab at the University of Colorado Boulder. 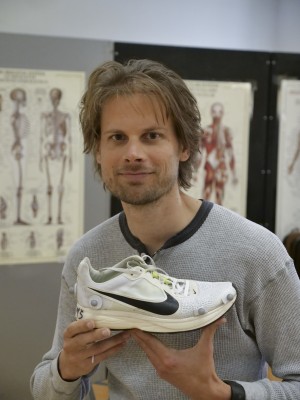