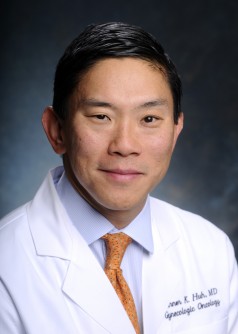 Warner Huh, M.D., professor and director of the University of Alabama at Birmingham Division of Gynecologic Oncology

Newswise — BIRMINGHAM, Ala. – A multinational study on a diverse group of women shows that a new nine-valent human papillomavirus (HPV) vaccine prevents infections and disease associated with the vaccine types, according to a paper published today in The New England Journal of Medicine. The vaccine has the potential to dramatically reduce rates of cervical cancer, as well as the number of cervical exams a women must have during her lifetime, says Warner Huh, M.D., professor and director of the University of Alabama at Birmingham Division of Gynecologic Oncology and one of the authors of the study.

“There is no question that the vaccine works,” Huh said. “Now, we have a second-generation vaccine that protects against 90 percent of the HPV viruses that cause cervical cancer. This vaccine can literally eradicate the majority of cervical cancer, if given widely and appropriately.”

The nine-valent HPV vaccine immunizes against nine genotypes of HPV known to cause cervical cancer. It is an advance from the four-valent HPV vaccine marketed by Merck & Co. as Gardasil, which was approved by the U.S. Food and Drug Administration in 2006. Gardasil, that Huh helped to develop and test, targets four genotypes that cause about 70 percent of cervical cancer. The new vaccine includes those four and five additional genotypes. Both vaccines are prophylactic, meant to be given before women are exposed to possible HPV infection through intimate contact.

“We’re really on the verge of a dramatic change that will positively affect all individuals, particularly women, in the United States,” said Huh, a senior scientist at the UAB Comprehensive Cancer Center. “The challenge will be to get the new vaccine into widespread use among young women.” Like the four-valent vaccine, the nine-valent Gardasil 9 vaccine requires three injections taken at day one, month two and month six. Gardasil 9 was approved by the FDA in December 2014 for use in females ages 9-26 and males ages 9-15.

“The real issue is we need to improve vaccination rates in this country. The population benefit seen in countries like Australia has been truly impressive. We should learn and adopt their vaccination practices,” Huh said.

In 2011, 12,109 U.S. women were diagnosed with cervical cancer and 4,092 died, according to the federal Centers for Disease Control and Prevention. It is commonly known that most cervical cancer is caused by HPV infection of the cervix.

The lead author of the nine-valent HPV vaccine study is Elmar Joura, M.D., of the Medical University of Vienna, Austria. Huh is one of 26 other authors and provided significant intellectual input about the design and analysis of the vaccine trial.

In January, Huh was the lead author of the most defining change in women’s cancer screening in the past 20 years. He led a group of cervical cancer-screening experts in writing a new interim guidance about the health advantages of using an HPV test alone, rather than the customary Pap smear, as the primary screen to find cervical cancer or its precursors. Under that new guidance, the Pap smear, which dates back more than 80 years, would still be used for follow-up tests if an HPV test is positive, and the Pap smear will still be used for primary screening of women ages 25 and younger. This new guidance affects about 80 million U.S. women ages 25-65 — or 1.2 million women across Alabama — who should be screened periodically by their health-care providers for cervical cancer.

Just as the public health need to increase rates of vaccination with HPV vaccine, there also is a crucial need to reach more women who continue to be unscreened or underscreened for cervical cancer, Huh said. Both of these improvements in clinical practice are vital pieces to ending cervical cancer for women.