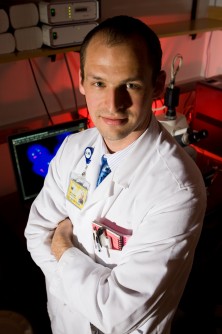 Newswise — ANN ARBOR, Mich. — A new study from researchers at the University of Michigan Comprehensive Cancer Center characterizes the genetic underpinnings of a rare type of breast tumor called phyllodes tumors, offering the first comprehensive analysis of the molecular alterations at work in these tumors.

The analysis uses next-generation sequencing techniques that allow researchers to identify alterations in more than 100 genes from archived tissue samples.

“We know little about the biology of phyllodes tumors. In part, they have not been studied much because it's difficult to accumulate a large number of samples. Using these new sequencing techniques, we were able to study archived tissue samples, which allowed us to identify enough samples to perform a meaningful analysis,” says study author Scott A. Tomlins, M.D., Ph.D., assistant professor of pathology and urology at the University of Michigan Medical School.

Researchers looked at 15 samples of phyllodes tumors, pulled from archived tissue samples at the University of Michigan. The samples were equally divided according to their classification, with five considered benign, five borderline and five malignant. While still a small sample, it can be sufficient with a rare tumor to identify genetic clues to the tumor’s biology. The researchers sequenced the samples against a panel of genes known to have some function or role in cancer.

Results of the study appear in Molecular Cancer Research.

“Even though phyllodes tumors are rare, it’s important to have good treatment options for the aggressive cases. The first step is understanding the underlying biology of these tumors,” Tomlins says. “Further study and validation is needed, but our work has identified several promising targets involved in phyllodes tumors.”

Funding: A. Alfred Taubman Medical Research Institute at the University of Michigan

Disclosure: Tomlins has a separate sponsored research agreement with Compendia Bioscience/Life Technologies/ThermoFisher Scientific that provides access to the sequencing panel used in this study. No other aspect of the study was supported by the company.