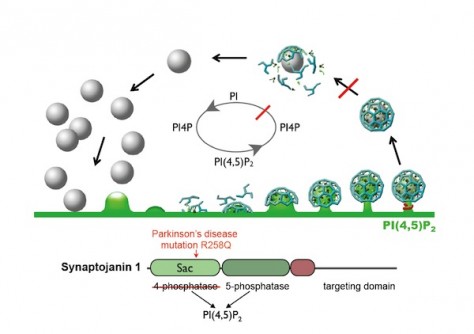 Schematic cartoon of the fusion of vesicles containing neurotransmitter with the outer membrane of the cell (left) at synapses and of their reformation by endocytosis (right). Vesicle reformation requires the assembly at the outer cell membrane of a complex of proteins that deform it and select components that need to be incorporated into the nascent bud. The assembly of these proteins to form a coat at the outer cell membrane requires the presence of the phospholipid, PI(4,5)P2, in this membrane. Conversely, shedding of coat proteins after endocytosis requires loss of the two phosphates from PI(4,5)P2, a process mediated by synaptojanin 1 via its 4- and 5-phosphatase domains. Synapses of mice harboring a Parkinson’s disease mutation in the 4-phosphatase domain of synaptojanin 1 reveal an accumulation of vesicles that fail to uncoat and neurological defects reminiscent of Parkinson’s disease.

Newswise — Howard Hughes Medical Institute (HHMI) researchers have introduced a genetic mutation found in some patients with early onset Parkinson’s disease into mice, creating a new animal model of the disease. Their studies of the mice add to growing evidence that the neurodegenerative disorder may arise in part from neurons’ failure to recycle the materials used to package and transport neurotransmitters.

The study, led by HHMI investigator Pietro De Camilli at Yale University, was published February 22, 2017, in the journal Neuron.

Neurotransmitters are the chemical signals that neurons use to communicate with one another. Inside a neuron, these neurotransmitters are enclosed inside small membrane-bound sacs called vesicles. The vesicles release their contents outside the cell into the synapse—the junction between neurons—by fusing with the outer membrane of the cell. The packaging materials are then quickly recovered by the original cell through a process called endocytosis, which forms new vesicles and ensures that the neuron is prepared to deliver its chemical signals to the synapse again. Several genes involved in this vesicle recycling process have been implicated in Parkinson’s disease.

De Camilli has been studying the process of endocytosis for more than three decades. His lab has characterized many of the molecules that participate in the intricate process, in which an assortment of proteins gather at the cell’s edge, coating a short segment of the membrane and coaxing it to fold in and bud off. The newly produced vesicles separate from the cell membrane encased in these endocytic proteins, which fall away during the final step of the process.

In 1996, De Camilli and his team discovered an essential synaptic endocytic protein that they called synaptojanin 1. After a new vesicle has pinched off from the cell’s outer membrane, synaptojanin 1 comes in, chemically modifying the membrane and freeing the endocytic proteins that cling to it. This transition involves the removal of small chemicals called phosphates, which act as attachment points for endocytic factors, from PI(4,5)P2, a lipid in the vesicle’s membrane.

A few years ago, six patients who developed an early-onset form of Parkinson’s disease in their twenties or thirties, were found to have a mutation in their synaptojanin 1 gene. Their mutations were exactly the same, and affected a part of the synaptojanin 1 protein called the Sac domain. Synaptojanin 1 removes two phosphates from PI(4,5)P2, and the Sac domain is responsible for one of these.

De Camilli says the location of the patients’ mutation was surprising, because while synaptojanin 1 must remove phosphates from vesicle membranes to separate them from their endocytic proteins, there was no evidence that the Sac domain was critical for this process. The removal of the other phosphate, handled by another part of synaptojanin 1, was thought to be more important.

De Camilli and his team quickly set about recreating the patients’ mutation in mice so they could study its precise effects. Mice with the mutation developed movement problems and epilepsy, similar to the neurological problems experienced by the patients.

When De Camilli and his colleagues examined the animals’ brains, looking for cellular defects that might underlie their symptoms, they found that newly formed vesicles inside neurons failed to shed their protein coats. The accumulation of these coated vesicles was almost as severe as the aggregation of vesicles observed in neurons that lack synaptojanin 1 entirely. “This tells us that the Sac domain has a critical role in endocytosis—more so than we would have ever anticipated,” De Camilli says.

An absence of synaptojanin 1 is fatal for both mice and humans, and it’s not yet clear why the Sac mutation, which interferes with synaptic vesicle recycling throughout the brain, causes movement problems and epilepsy, but not a complete failure of the nervous system. The team did note that the mutation caused some structural abnormalities in the part of the brain where neurons deteriorate in patients with Parkinson’s disease—the nigrostriatal pathway—that might contribute to specific symptoms, De Camilli says.

With these new findings, the evidence continues to mount that defects in endocytosis play an important role in Parkinson’s disease. “It’s very striking that several genes implicated in the early-onset form of Parkinson’s seem to be directly or indirectly related to endocytic function,” De Camilli says. One of these, auxilin, cooperates with synaptojanin 1 to remove the endocytic factors from newly formed vesicles, emphasizing the importance of this step. Overall, eight genes that have been linked to Parkinson’s disease encode proteins directly or indirectly involved in endocytosis.