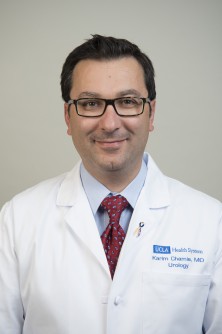 Newswise — UCLA researchers have found that radiation therapy is the most common treatment for men with prostate cancer regardless of the aggressiveness of the tumor, risk to the patient and overall patient prognosis. These findings lay the groundwork for improved treatment assessment by physicians and to better inform men fighting the disease.

Led by UCLA Jonsson Comprehensive Cancer Center member Dr. Karim Chamie, the observational study analyzed the claims data of over 37,000 patients over a three-year period (2004 to 2007), provided by the Surveillance, Epidemiology and End Results (SEER) Program of the National Cancer Institute (NCI).

The research was conducted at UCLA and Chamie’s team found that radiation therapy was the most common treatment at 58 percent, followed by radical prostatectomy (a surgical procedure to remove the prostate) at 19 percent. Other treatments trailed at 10 percent, including watchful waiting (where doctors wait and see if cancer progresses before treating it) and active surveillance (when patients undergo routine biopsies, blood tests and MRI to determine if cancer is progressing and undergo active treatment).

Prostate cancer remains the most commonly diagnosed solid organ tumor type among men in the United States, with an estimated 233,000 new cases and 29,480 deaths in 2014. Earlier diagnosis and treatment advances have meant increased use of aggressive local treatments, particularly radiation therapy, which can result in adverse effects.

Patients must often consider the recommendations of physicians, the aggressiveness of their cancer, whether active surveillance is preferred over treatment, and healthcare costs, according to the study background.

Chamie and colleagues discovered that radiation was the most common treatment prescribed regardless of cancer stage, prostate-specific antigen (PSA) level, cancer grade, or the life expectancy of the patient. The most significant predictor of a man receiving radiation therapy is a referral to a radiation oncologist. On the other hand, urologists and surgeons significantly incorporated the age and health of the patient as well as the aggressiveness of the cancer when recommending surgery.

“Doctors and patients view radiation as safe,” said Chamie, assistant professor of urology. “There’s no anesthesia or hospitalization, the patient comes in for 15 or 20 minutes for their daily radiation treatment, it’s localized to a specific area, then they get to go home. They often don’t notice any immediate effects upfront.”

If a patient has an aggressive prostate cancer and has a long life expectancy, then these side effects and risks may be significantly outweighed by the benefits of the radiation treatment. However, if a man with an indolent (slow growing) prostate tumor and a limited life expectancy is treated with radiation therapy and suffers from these side effects during the twilight of his life, then he reaps no benefit and only suffers from the toxicity.

Chamie hopes these findings enlighten the public and allow physicians to make an informed decision when it comes to the best treatment option for men who may or may not benefit from radiation therapy in the long run.

“Men fighting this disease don’t always need radiation or surgery as their only choice,” said Chamie. “As we find more reports demonstrating the safety and efficacy of active surveillance, I hope patients and physicians look to this as the first treatment option for low-risk and indolent disease. Here at UCLA, I am proud to say that we have a robust active surveillance program that utilizes MRI and targeted biopsies to monitor and survey these indolent tumors.”

The study was published online today ahead of print in the journal JAMA Oncology.

UCLA's Jonsson Comprehensive Cancer Center has more than 240 researchers and clinicians engaged in disease research, prevention, detection, control, treatment and education. One of the nation's largest comprehensive cancer centers, the Jonsson center is dedicated to promoting research and translating basic science into leading-edge clinical studies. In July 2013, the Jonsson Cancer Center was named among the top 12 cancer centers nationwide by U.S. News & World Report, a ranking it has held for 14 consecutive years.