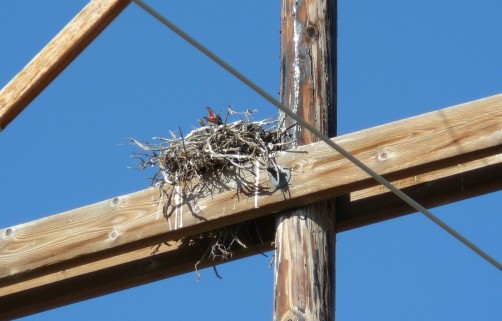 Using the data from their field research and reviewing historical data from other studies, the scientists developed models to predict nesting probabilities for each species. Overall, the analysis showed that transmission towers and other artificial substrates (e.g. cell towers, billboards, buildings) are overwhelmingly preferred by ravens as nesting sites, and are not preferred by any of the three hawk species. A nest located on artificial substrate is nearly 100 percent, 89.4 percent, and 87.1 percent more likely to be that of a raven than that of a Swainson’s Hawk, Red-tailed Hawk, and Ferruginous Hawk, respectively.

“Raven populations have increased precipitously in the past four decades in sagebrush ecosystems, largely as a result of fragmentation and development of anthropogenic structures. Our study shows that in addition to habitat fragmentation, the addition of human-made structures benefit ravens, whereas some species of raptors like the Ferruginous Hawk have been impacted and limited in nesting areas,” said study lead author Peter Coates, an ecologist with the USGS Western Ecological Research Center.

Why the difference in nest selection between ravens and large hawks? The answer may be linked to the availability of preferred prey. “Ravens are opportunistic foragers, eating just about anything, including carrion. In addition, they tend to be highly intelligent birds that adapt quickly to changing environments and have been shown to transmit learned behaviors from one generation to the next. Conversely, hawks tend to be strongly territorial, intolerant of human disturbance, and prefer prey like jackrabbits that occupy similar habitats,” said coauthor and USGS ecologist Kristy Howe, whose masters thesis research with WCS formed the foundation of this study.

The study took place on the sagebrush landscapes of the U.S. Department of Energy's Idaho site and surrounding areas in Idaho, USA, locating nest sites for all four species over a three year span. Researchers analyzed four primary factors that influence nest locations among species:

• amount of native grassland, and

• proximity to habitat edge (where any of four natural habitat types might abut one another) and proximity to human-made features.

Ravens were classified as an uncommon breeder within this area as recently as 1986. Common Ravens are now the most pervasive predatory species nesting in this area, accounting for 46 percent of nests among these four avian predator species.

Transmission towers are the tallest objects at the study area. Nesting on or near them may afford ravens myriad advantages, including a wider range of vision, greater attack speed, and greater security from predators, range fires, and heat stress. While this is good news for ravens, it could be bad news for sensitive prey species, including the Greater Sage-Grouse.

Howe speculates on the study’s other implications and directions for future research: “Since ravens are important predators of young birds and eggs, and hawks are predominantly predators of adults, these landscape changes could shift ecosystem dynamics. Predation risk would now likely be greater for sage-grouse eggs and young, and correspondingly lower for adult sage-grouse and other prey species. This adds new insights for ecosystem managers who seek to understand the complex relationships between ravens, hawks, sage-grouse populations, and habitat changes.”

“Industrial development, wildfires, invasive plant species, and other disturbances are changing sagebrush landscapes throughout the western United States. Our results shed light on how these avian predators might change with them,” said Coates of USGS.

The study, “Landscape alterations influence differential habitat use of nesting Buteos and ravens within sagebrush ecosystem: Implications for transmission line development,” will appear in the August 2014 print issue of the journal The Condor.(This study is currently online.) Authors include Kristy Howe of WCS and USGS, Peter Coates and Michael L. Casazza of the USGS, and David Delehanty of ISU.

For additional information on this story, or to speak with the scientists involved, please contact Scott Smith at 718-220-3698.

• 70 percent of nests located on natural substrates (cottonwood and juniper tress)• Breeding pairs of Red-tailed Hawks, also considered a generalist species, increased substantially from the mid-1970s (1 nest) to the mid-1990s (33 nests) and have remained stable since that time.

• 98 percent of nests located on natural substrates (juniper, cottonwood and cultivated trees)• Nested in communities dominated by native grasses and near agricultural areas

• Approximately 74 percent of nests were located on natural substrates, mostly juniper trees.• Selected areas dominated by contiguous stands of sagebrush. • Ferruginous Hawk nests were located farther from roads and other human developments when compared to the other species.• Most likely to be negatively impacted by human encroachment.