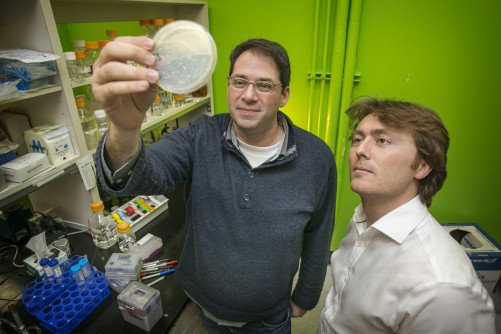 Newswise — STONY BROOK, N.Y., February 23, 2015 – Evolution is change, and not always for the better. Evolution, in fact, is at the core of many of the diseases that are hardest to treat. Pathogens such as bacteria and parasites evade their host’s defenses or antimicrobial drugs through evolution. Cancer itself in an evolutionary process, whereby “rogue” cells evolve to grow beyond their normal barriers, migrate to distant locations in the body, and ultimately evade chemotherapy.

Sasha Levy and colleagues have developed a new technology called high-resolution lineage tracking that lets scientists monitor the evolution of populations of cells with unprecedented granularity and study these processes more quantitatively. The study, Quantitative evolutionary dynamics using high-resolution lineage tracking, will be published for advance online on February 25 in the journal Nature.

“The technology has the potential to help us understand many processes important to infection and disease,” says Levy, assistant professor of physical and quantitative biology in the Lewis and Beatrice Laufer Center at Stony Brook University. “One avenue we are pursuing is to place it into pathogenic microbes to study how they develop resistance to antibiotics. We are looking into placing it into cancer cells to try to understand the fundamental rules by which cancer cells adapt and metastasize. We hope that gaining better understanding of the evolutionary dynamics of these disease processes will allow us to optimize treatment to slow their rates of progression.”

The researchers developed a set of genetic tools to insert millions of unique and random DNA sequences at a specific genomic location in Saccharomyces cerevisiae—yeast. The study then followed competing cell populations by tracking these DNA “barcodes” — in effect, watching adaptive evolution in near real time as it unfolds.

“By taking a census of these barcodes over time, we can discover when a cell lineage becomes more fit and expands within the population,” Levy says. “By doing this on a massive scale—we tracked 500,000 cell lineages simultaneously—we can understand some fundamental properties about how cell populations compete with one another and evolve.”

Levy likens it to studying human history through a census of last names taken every year for thousands of years. “Even with this limited information, you would be able to say a lot about history—you could tell which families were successful and when, which families were wiped out because of competition or war, and how families migrated,” he says. “We did a similar thing in competing cell populations. But instead of tracking last names, we track DNA barcodes—tiny identifiers we place in the genome that allow us to uniquely identify a cell and its descendants.”

Levy, who is also a professor in the Department of Biochemistry & Cell Biology at Stony Brook is the lead author. He began the project while he and first co-author Jamie Blundell were postdocs at Stanford; Blundell joined Levy at the Laufer Center to continue the work. Funding comes from the National Institutes of Health, the National Science Foundation, Stanford University, the Gordon and Betty Moore Foundation, and the Laufer Center.

Levy believes the interdisciplinary project—a close coupling of biology and theoretical and applied physics—has made two critical breakthroughs. “We have developed a general system to track cell lineages at high resolution,” he says. “And we have developed the theory to make sense of this type of data, in order to study evolution in a more quantitative way.”

That’s of crucial importance—the evolution of large cell populations underlies some 30% of deaths worldwide, including those caused by bacteria, fungi, parasites, and cancer.

“I have always been excited to learn about how evolution works, but disappointed by our lack of tools to study it quantitatively," he says. "This caused a big chasm between what theorists were capable of predicting and what biologists could actually measure. I saw this project as an opportunity to narrow that chasm, just a little bit.”

Robert S. Haltiwanger, Chair of the Department of Biochemistry and Cell Biology, and Ken A. Dill, Director of the Laufer Center, couldn’t agree more. “We are very excited about Sasha Levy's work,” they said in a joint statement, “and we look forward to seeing fundamental breakthroughs that come from application of the methods he has developed.”