New Therapy Lessens Impact of Mistreatment at a Young Age 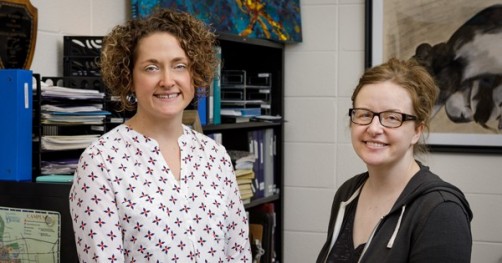 Newswise — Everyone has challenges of one kind or another. But research shows that mistreatment at an early age can have long-lasting and life-altering repercussions that could be passed to future generations.

Work underway in the laboratory of University of Delaware neuroscientist Tania Roth suggests new ways to help mitigate that damage.

The research was highlighted as a "hot topic" by the Society for Neuroscience in its literature for the world's largest gathering of those in the field - Neuroscience 2017 - a five-day event that started Saturday in Washington D.C. Organizers expected more than 30,000 participants from 80 countries.

Roth and graduate student Tiffany Doherty are onsite to present details of the research at a poster session Tuesday, Nov. 14. Undergraduates Johanna Chajes and Lauren Reich also contributed to this work.

Roth and her team already have shown that mistreatment early in life can leave epigenetic marks in the brain and increase the risk of aberrant behaviors - changes that have been documented in rodents and humans, including changes that sometimes do not emerge until adulthood.

But recent findings in Roth's lab have shown that certain drugs - when delivered at the time mistreatment is experienced - can prevent and/or reduce those marks - so far, only in males. Females have not shared the benefit from the same drug, Doherty said, a result that underlines the importance of recognizing sex-specific differences in research.

"We definitely think we can do the same thing in females," Roth said. "It may take a different drug or a higher dose, but we have a hint that we're on to something."

The work is part of a larger effort by Roth's lab to establish a causal link between exposure to early adversity, epigenetic marks and behavior.

The findings and the potential for effective treatment could have significant implications for millions of people. According to the Centers for Disease Control, 683,000 reports of child abuse or neglect were reported in the United States in 2015 alone.

Such adversity has been linked in Roth's research to DNA methylation - an epigenetic process that can reduce the ability of some genes to function properly and increase the risk for psychiatric disorders. Epigenetics are changes in genetic activity that are caused by something outside the genetic code - things such as viruses, bacteria, exposure to toxins, dietary practices and other factors including psychosocial stress.

Recent research has shown that such marks can be seen at a gene known as the brain-derived neurotrophic factor gene (Bdnf).

Roth's lab first found these results in rodent models. When females had inadequate nesting materials, the stress caused them to mistreat their young. Those young rodents exhibited epigenetic changes and associated behavioral dysfunction, but sometimes not until reaching adulthood.

In collaboration with UD Prof. Mary Dozier, Unidel Amy Elizabeth du Pont Chair in Child Development, who studies the impact of adversity on young children, Roth and her team are analyzing these same DNA markers in those cases and the efficacy of intervention to change those epigenetic marks.

Roth is a pioneer in the field of behavioral epigenetics and has contributed a great deal to the knowledge scientists are developing on this emerging discipline.